Trending Stories from The Marquee
You are at:Home»Features»Cat Empire claws its way into the states with Two Shoes
By Marquee Magazine on September 1, 2005 Features, Jonathan Keller, Live

Cat Empire claws its way into the states with Two Shoes 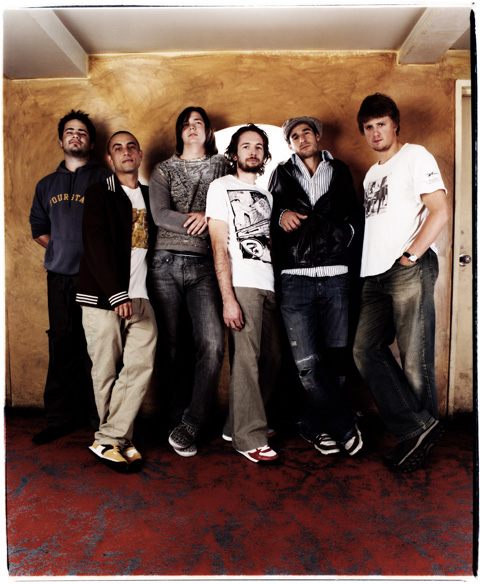 In the fifth line of the opening track off Cat Empire’s second album Two Shoes, the sophomore effort that is supposed to break the band stateside, the group shouts in glorious unison, “‘Show us the money’ was the call of the night.”  Having already had two double-platinum albums in Australia, the band’s formula of danceable sing-alongs with the right amount of jam will show this Melbourne sextet quite a bit of U.S. green in the coming year.Cat Empire is a very unique band. They exhibit a sound where the commerciality of the music has no ceiling. Consisting of Ryan Monro on double and electric bass, Harry J. Angus on trumpet and vocals, Will Hull-Brown on drums, Felix Riebl on percussion and vocals, Ollie McGill on Rhodes, melodica and banjo, and Jamshid “Jumps” Khadiwala on decks and turntables, the band, as a functioning unit, is musically solid.  They feature huge horns over Latin rhythms which are driven by booming bass, turntables and a vocalist who has somehow made rapping with a thick Australian accent sound very cool and unrehearsed. Their music is upbeat but unpredictable.  It is danceable yet somehow challenging. Think England’s The Streets meets Buena Vista Social Club with a twist of Spearhead (minus the political jargon).

“Our sound comes from having six people in a band with different tastes,” Monro said in a recent telephone interview from Australia with The Marquee. “We are always searching for different things, never excluding anything we might hear.  Our sound just kind of happened naturally. Each member brought in what he liked. ”

Formed in Melbourne in 1999 as a trio, Cat Empire originally featured McGill on keyboards, Riebel on percussion and Monro on bass. The trio frequented various underground bars where it played shows and started to build a small following — its members still honing and discovering their own unique sound. A little over a year later, Cat Empire was a full blown six-piece that had a double platinum debut album and received six Australian Record Industry Association nominations (Australia’s version of the Grammy).

“In the beginning we played a lot and learned that the live energy from the audience is a big part of playing,” Monroe said. “For the most part, we really enjoy touring. Getting in front of an audience is the band’s strong point. Playing together comes quite naturally.”

This natural sound has made Cat Empire a success in both their homeland and in Europe. Having released Two Shoes in Australia on Virgin/EMI in April, Cat Empire is surprisingly still without an American contact. In many ways, the band is a roaming free agent, touring the U.S. for the sake of touring and spreading its music. Why? Well, because they can and they have the money to do it. According to a press kit from Hoopla Media and Public Relations, vocalist and trumpeter Harry J. Angus said the band has had many American offers, but none with the freedom that their label in Australia allows. If the band was to break big stateside, it is quite clear that Two Shoes is the album that could do it.

Last fall, Cat Empire decided to record Two Shoes in Havana, Cuba, with the assistance of producer Jerry Boys (Buena Vista Social Club), who was a fan of the band’s first album, at the now-world famous Egrem Studios (Buena Vista Social Club, Afro Cuban All-Stars, Irakere). The product, Two Shoes, is atmospheric, tight and easy to listen to and enjoy. The first Australian single, “Sly,” debuted at #1 on the Australian charts and went platinum in just four weeks. The album does a great job of showcasing the band’s strengths, which include swooping hooks and layers of melodic musicianship, which can easily be expanded in Cat Empire’s live show. The disc itself sounds very live at times, especially on headphones.

“We went to that studio to work with Jerry because of Buena Vista and the Afro Cuban All-Stars,” Monro said. “We went in wanting to do a live thing and the record that came out sounds very much alive to me. To be isolated, you get more done. Our first record took seven months and this one was recorded in a month and then mixed in London. I am proud of this one especially.”

With a 16-date tour of North America beginning next month, Cat Empire seems unabashed by the difficult task of becoming an American success, maybe not realizing how hard it might actually be. “It is just another tour,” Monro said. “It is really no different than any other. Most people might feel pressure, but we have had a really good time when we came there before. We are excited to see the area and let the music speak. We have never been to Colorado.”

Maybe Cat Empire somehow knows they are a commercial gold mine awaiting discovery.