Trending Stories from The Marquee
You are at:Home»Uncategorized»Kan’nal channels primal screams into recent success
By Marquee Magazine on September 1, 2005 Uncategorized 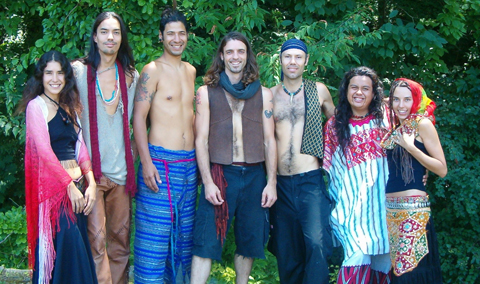 Fire, Air, Earth, Water: the four elements that pertain to human existence. It is upon these elements, these entities, along with the echoes of Mayan tribal lore, a taste of Guatemalan culture and the hint of the literary style of magical realism, that Boulder’s Kan’nal seems poised to take their performance art to the next level.

Bohemianism is the root of the existence of Kan’nal and the essence of the fate that brought the group together. The various individual creative avenues found one another in Guatemala and in various ancient towns shadowing Mayan ruins in Mexico. Upon “La Ruta Maya,” group founder, lyricist and singer Tzol, and guitarist Tierro came upon bassist Rodolfo Escobar III and his traveling partner Teresita.

As the group fortified its existence, adding new members drummer Gilly Gonzalez and percussionist Aaron Jerad, they found the ability to connect or “channel” with the Guatemalan audiences for which they played. Tzol’s passionate lyrics fused with Tierro and Escobar’s original guitar compositions. It was an energy to which drummer Gonzalez provided a subliminal percussion and didgeridoo, and fellow percussionist Jerad enhanced even further. On the visual front, Teresita translated each work into a shamanistic and ritualistic dance and the performance-based edge quickly earned the band a reputation in Central America.

For Tzol, the nurturing by the atmosphere of their environment was life enriching, life changing, and he quickly felt an honest and genuine connection with Guatemala. “Artists down there, rather than barely surviving, are actually thriving and feeling enriched on very little. Other artists and musicians feel very honest. They seem much more alive,” he said.

For Tzol (pronounced “soul”), who takes his name from the Mayan translation of the Spanish sol or “sun,” traveling awakened a certain spiritual awareness that lay dormant while living in the States. “I’ve met some of the happiest people I’ve ever met and they were living the simplest lives. Which is the total opposite of what the States are about. Down there, they’re like, ‘Wow. Art. Music!’”

Bassist Escobar quickly realized that the payout for performance far exceeded monetary value. “You’re traveling and you’re not making a whole lot of cash, but people genuinely enjoy what you are doing,” he said.

Fast forward a few years to the band relocating to Boulder in 2003 under the tutelage and guidance of The Boulder Group Management. The band entered into the music scene that has nurtured such multicultural expressionistic performance based acts as Ozomatli and Cabaret Diosa to national prominence. Here the band was able to intensify its mission. “Before, when we lived in separate places, we’d come together about two weeks before the tour and rehearse,” Jerad recalls. “Now we’re always together. We rehearse together, live together.”

Drawing tribal influences from the Native American tradition of channeling the shaman, Kan’nal connects with the audience during their performance rituals. “Everyone has a shaman within them,” Tzol explains. “I mean, what is the shaman but a way of expressing their innermost spirit. And when we, Kan’nal, put all of our musical energy together, we channel all of that innermost spirit and energy.”

Kan’nal’s live show is mandatory. Kan’nal is performance art, their transcendental connections with the natural environment must be ritualized. Yet their essence is culturally explored music, and this comes through on Dreamwalker, their major label debut (Sony Red Eye) due on shelves on Sept. 20. “This CD made itself,” Tzol said. “The music was always there. We want our audience to experience our live vibe and our goal was to get that vibe on the CD.”

Dreamwalker plays out like a dream walk itself, a vision quest of sorts with the sequencing urging listeners on their own musical walkabout. The adrenalin-orchestrated track “Gypsy” opens the disc, while slower numbers such as the oneric “Time” coddle a listener into relaxation. The group also includes three live tracks. “The thing with Kan’nal is that you need to go to a show and experience the vibe with it,” Tzol said. “We want to trigger people. Try to stir things up. We want to get people to think about a higher self. But we don’t want to push anything on people. We want to inspire people to discover themselves.”