Trending Stories from The Marquee
You are at:Home»Features»Margot and the Nuclear So and So’s prepare to blow up South Park Fest
By Marquee Magazine on September 1, 2005 Features, Interviews, Live, News 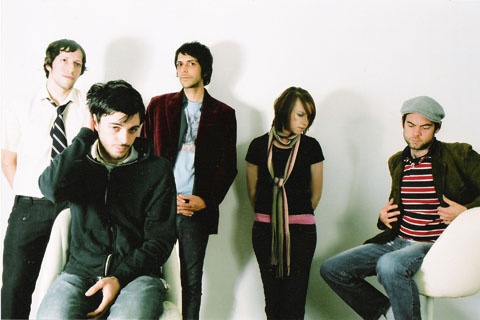 Margot and the Nuclear So-So’s is the band you want to tell your friends about before they start dripping down some radio station’s countdown. The band seems to have dropped out of a Bob Dylan documentary and started playing painfully beautiful indy rock music reminiscent of, ‘the way [the band]feels when [they]watch Woody Allen movies.’

The delicate melodies blend with stories thought up by 21-year-old Richard Edwards and are delivered by an orchestra of simplicity. “We just try and arrange things in an interesting way as much as we can so that it sounds different to us. It’s definitely better or worse or equal to what else is going on,” says Margot and the Nuclear So-So’s singer/songwriter Edwards on claims that the band is inventing the genre “scarf rock.”Urban folk or “scarf rock” is a mixture of insightful guitars, witty rhythms and the electronic edge that echoes The Postal Service (even though Edwards claims to have been doing it first). The painfully sincere lyrics are complimented by breaths of trumpet or cello and are delivered with comforting cynicism as songs like “Skeleton Key” engulf anything real and boil it down to a bittersweet memory.

With influences like Paul Simon, Rufus Wainwright, Radiohead and even The Arcade Fire, Margot and the Nuclear So-So’s have plenty of inspiration for a unique sound. “We kind of just asked everyone we knew to play an instrument and what sounded good we kept,” said Edwards. “We wanted to sound different and wanted any kind instruments that sounded good.”

The band began when Edwards went to a pet shop to buy Margot, a kitten and now the band’s namesake, and met up with Andy Frye. When the two recognized each other and began talking about musical obsessions, they decided to start the band.

With the help of drummer Chris Frye (of The Academy), bass and Rhodes players Tyler and Emily Watkins, mutual friend Jesse Lee on cello and trumpeter Hubert Glova, Edwards and Frye formed the band of individuals that is Margot and the Nuclear So-So’s. “Everyone’s very unique and fun and nice to be around and interesting, and no one puts on a shirt they don’t like — so I think they are cool.”

The band’s newest album, which was meant to be released in late April, was released May 31 under the name Dust Of Retreat. While the delay was caused by disorganization, it’s hard to believe this is Margot and the Nuclear So-So’s’ first-ever album.

The intricate balance between elaborate dramas and low key songs is the epitome of vintage cool, but to Edwards, the album was just ‘so-so.’ “Every record you make is kind of a snapshot of what’s going on and what you had access to. You do the best you can and it kind of naturally expands,” he said.

Perhaps as an attempt to keep Margot and the Nuclear So-So’s from being too modest, bigger labels have been swarming the band after the Standard Recording release. Luckily for the mid-size indie labels of the world, Edwards, who plans on sticking to indie labels forever, feels that big labels “fall into the ‘Safeway’ of art. They strip the freedom that helps you grow and make better music.”

Frye and Edwards plan on flying to New York to talk to labels right before they kick off their latest tour, with the idea that the band will “probably get serious about a new album after the tour,” said Edwards.

Arcade Fire Bob Dylan Margot and the Nuclear So and Sos Radiohead
Cool, Share this article: Twitter Facebook Google+ Pinterest LinkedIn Tumblr Email
Previous ArticleCat Empire claws its way into the states with Two Shoes
Next Article Alice Cooper takes on the ‘roll’ of the happiest man in rock