Trending Stories from The Marquee
You are at:Home»Features»After Midnite, we gonna let it all hang down
By Marquee Magazine on October 1, 2005 Features, Interviews, News

Midnite brings roots reggae to the U.S. from the Virgin Islands 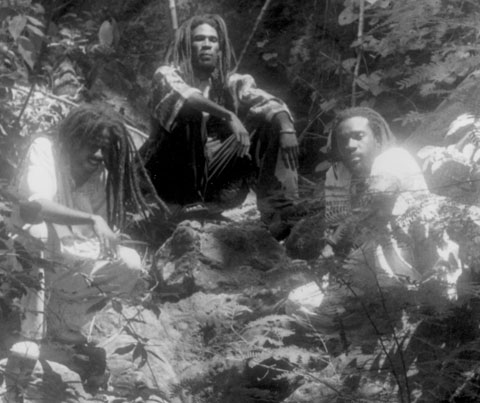 Since the untimely death of Robert Nesta Marley (known to most as “Bob”) in 1982, there has been a void in the world of reggae music that has gone essentially unfilled, despite efforts by countless bands to hold that title spot.

The roots style that Marley perfected and popularized has lost ground to other types of reggae, such as dub and dancehall. Original rebel music made by Rastafarians has become increasingly hard to find, while remixes and covers of old Marley tunes continue to dominate playlists. While the world looks to Jamaica for the second coming of Bob, roots music has re-emerged somewhere else entirely: the U.S. Virgin Islands.

The band Midnite, founded over a decade ago by lead singer/lyricist Vaughn Benjamin and keyboardist Gaindei Ron Benjamin on the island of St. Croix, have made their own brand of cutting edge roots rock reggae by blending new recording technology with traditional drum and bass patterns, and conscious lyrics that are cutting-edge, yet age-old in content.

In 1994, they moved the band to Washington D.C., but then in 1999, after developing a massive following in that area and at the peak of their stateside popularity, they returned to their island home. So, maybe it isn’t such an accident that the re-surfacing of raw roots music happened where it did.

“Let me tell you, there are men here in St. Croix who simultaneously, believe it or not, when the movement was trodding out in Jamaica, there were men trodding out the same way, without knowledge of the Jamaican movement,” said Vaughn Benjamin in a recent interview with The Marquee. “And years back, there’s a man from St. Thomas — Edward Wilmot Blyden — this is who Marcus Garvey followed. So the Virgin Islands has always been in the front line.”

Midnite truly are the people’s band. With very little industry support, they have managed to inspire a new generation with their music, drawing larger and larger crowds to their shows.

“People pick out what they think is a commercial tune,” said Vaughn. “Because the playlists of the whole Earth are controlled by the same monsters, the playlists are guarded to make sure that nothing they have not screened can get through.”

Youth, both here in the U.S. and internationally, are drawn in by the band’s music but also by their message: to look to the teachings of the Rastafarian faith. While songs about trying to do good, revolution, social inequality and injustice might not seem fit with your typical teenager’s notion of what makes a rockin’ tune, Midnite is still managing to win over many.

“There’s a massive explosion of reggae music. I mean, endless youth. Because of that explosion it seems the children’s hearts are directed onto Haillie Selassie the Most High. The youth, it seems, have lost interest in any music which is decorative, ornamental and vanity-based. They want reality music. We just don’t know what’s going to happen, but it’s going to be big. I personally am just doing the Almighty’s work, which is to tell a very good truth, a practical truth. That truth can be utilized in a social-economic cycle, in a logical, political setting, for the betterment of whole groups of people. That’s what I’m about and let the financial chips fall where they may,” Vaughn stated emphatically.

As a matter of fact, those chips have been stacking up nicely for the group in recent years, as word of mouth has brought them worldwide acclaim and recognition.

With five full length albums in addition to scores of EPs and compilations, Midnite already have a prodigious body of recorded work to stand upon.