Trending Stories from The Marquee
You are at:Home»Album Reviews»Blues Travelers
By Marquee Magazine on October 1, 2005 Album Reviews, Features, Interviews, News

Blues Traveler stop thinking so much for their latest incarnation 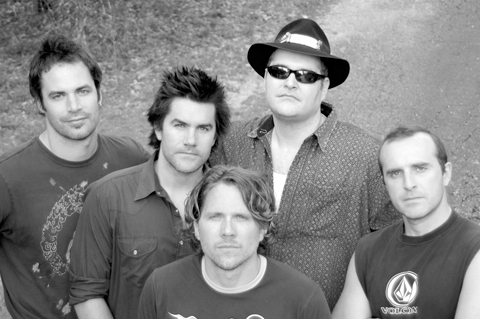 The tone and velocity with which Blues Traveler’s new disc ¡Bastardos! comic book-like cover jumps out at you in sunset oranges and yellows,  shows five sombrero wearing, pistol-waving, fist-a-cuff flying, lone ranger banditos and one damsel in distress. Apparently there are no badges needed for the ambassadors of  pop jam.

“Hey, we’re five Clint Eastwoods doing what we want  to do,” said Blues Traveler keyboardist Ben Wilson in a recent conversation with The Marquee.

The whole ¡Bastardos! package echoes the spaghetti western cartoonish style that BT 2.0 take. It’s a philosophy that states they’re too young to be old, don’t think too much about making records, and don’t take anything too seriously.  But don’t get the idea that this is some Spanish rice-flavored concept album where Blues Traveler meets Buena Vista Social Club. No, this is just Blues Traveler being Blues Traveler. But this time they’re having more fun.

¡Bastardos! contains the same urgency as before and utilizes the chemistry of an entire quintet. For Wilson, who spoke with The Marquee during a break from a make-up session on the Jay Leno show, “¡Bastardos! feels more like a representation of the whole band.”

It’s a whole band that has seen some significant lineup changes since the days of “”Runaround.” Wilson is Blues Traveler’s most recent addition, and bassist Tad Kinchla joined in 2001. Wilson and Kinchla join original founders drummer Brenden Hill, guitarist Chan Kinchla and the charismatic frontman and harmonica player John Popper.

Wilson said that the new line-up has given the band a new dynamic and is ultimately resulting in a happier Blues Traveler. “With the last few records, there wasn’t the same sense of satisfaction,” he said.

And it’s almost no wonder. Blues Traveler is a band that has gone through enormous growing pains since it first burst onto the scene in 1990 with its self-titled debut. They followed four years later with the highly praised Four and their top hit “Runaround.”

Blues Traveler came of age before fans eyes. And perhaps it was those growing pains and the stress from the continual touring and recording schedule, that ultimately lead to the most serious growing pain of all: the 1999 death of original bassist Bobby Sheehan of a drug overdose, during a self-imposed hiatus from touring.

So for Blues Traveler, it was soul searching and driving and diving ever deeper to find out why they all got into rock and roll on the first place. With that soul searching came a new attitude and input from the whole band. ¡Bastardos!, a comprehensive effort, has every band member credited for  offering musical ideas, with Wilson co-writing almost half the songs on the album — even yielding lyrics, a specialty usually reserved for Popper. It seems band-wide that they took the advice that pitching coaches usually employ on their struggling ace: don’t think about things too much.

“The record is a reaction to the opposite of stressing out about what kind of record to make and what kind of band we are. (We wanted to) just let things happen,” Wilson said. “It felt fresh, organic, and just kind of happened. Nothing was pushed. Nothing was grinded.” Yet, with the collective effort, the record, Wilson said, is “more of a representation of where the band is now.”

“John came up with the title. Originally, the consideration was for Blues Traveler: Those Bastards, as in Blues Traveler, those bastards did it again!” Wilson said.

Tongue-in-cheek, and perhaps a nod to the Spanish influence in Austin where the record was recorded, “Bastards” became ¡Bastardos!, complete with bandito high jinks and the five Clint Eastwoods rescuing their damsel.