Trending Stories from The Marquee
You are at:Home»Features»Calexico and Iron & Wine
By Marquee Magazine on October 1, 2005 Features, News, Timothy Dwenger

Iron & Wine, Calexico team up for the release of In the Reins EP and Tour 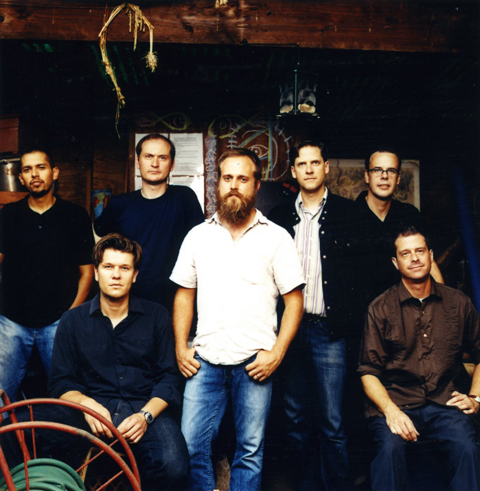 As the final notes of “Dead Man’s Will” fade out of the speakers and the first collaboration between Iron & Wine and Calexico comes to a close, there is a strange sense of calm that sweeps in. In the Reins makes its mark as a very solid seven-song EP that showcases the unique attributes of each musician.

While both bands have had success on their own, Sam Beam’s role in this project as lead singer and songwriter for Calexico seems a natural fit. As a joint tour looms, both John Convertino of Calexico, and Sam Beam of Iron & Wine took time to speak with The Marquee about the In the Reins project.

Though In the Reins was released in mid-September, it was back in 2002 when Howard Greynolds of Overcoat Records originally put Beam in touch with Calexico founders John Convertino and Joey Burns. At the time, they tossed the idea around of re-recording some of the songs Beam had recorded at home on his four-track.  The idea didn’t come to fruition due to other commitments, and the unaltered versions of the songs eventually became the Iron & Wine debut, The Creek Drank the Cradle. But they never put the idea to rest, said Beam. “We always sort of kept the idea in the back of our minds, that we’d really like to do a project together sometime,” he said.

The intervening years have seen Sam Beam and his music explode on the national scene. With strong backing from the mega indie label SubPop, Iron and Wine has evolved from meager beginnings in the home studio of Sam Beam to being one of the most popular acts on the ever-expanding indie-folk scene. The massively successful Garden State Soundtrack (where Beam and company covered the Postal Service hit, “Such Great Heights”) certainly gave them a boost. However, it is his own, original material that has kept him in the crosshairs of industry professionals and music fans alike.

Though Iron and Wine hails from southern Florida and Calexico from Tuscon, Ariz., one can instantly see why Greynolds thought these two would play off each other well. Each has a very distinctive acoustic sound that draws heavily on regional influences. Beam’s stripped down blues-based sound reflects the southern landscape that he has been surrounded by for most of his life. In sharp contrast, Calexico incorporates the complexity of the Mariachi music that filters across the border into Arizona with their mellow Southwestern folk ballads. It somehow seems fitting that the two sounds melt into one with Beam’s whispery vocals guiding the way.

In the Reins was completed in five short days at Tuscon’s Wavelab Studios. Beam arrived alone, armed with a notebook of songs and his acoustic guitar. “I had all these songs lying around, older songs that didn’t make it on the first couple records, and we took them into the studio and re-did them,” Beam said. “I had recorded them at my house as I do all my songs, and had sent them the recordings. In the studio, sometimes they changed significantly and sometimes they didn’t. The fun of the project was to take these songs that only existed in a certain context and put them in the hands of a band that well-versed in different types of music.”

The resulting songs have been given rave reviews by the toughest of critics. The cynical, and often downright cruel, Indie rock webzine Pitchfork praised the collaboration: “In the Reins is the first in what, if we’re all very lucky, will be a series of collaborations between Iron & Wine and Calexico. There isn’t a disappointing song on the EP.”

As the bands prepare to go on the road together this fall, they are planning a stage show that should be anything but disappointing. Modeled loosely on The Band’s legendary Last Waltz, both bands will invite musician friends to join them on stage as the show stops in various cities around the country. “We’re good friends with the girls in Sleater-Kinney, so maybe when we’re in Portland they’ll join us,” Convertino speculated. With all the shows and festivals these two bands have played over the past several years, it is almost impossible to imagine who might show up at a given gig. Beam admitted that “our agents might be doing some set-up work with guests, but we aren’t doing much of that planning at this point. It will come together as the shows get a little closer and we can find out who is available.”

Though Convertino was reluctant to commit to any guests that would be gracing the stage of the Fillmore when the tour swings through town, he did mention, “We have some friends who are in Devotchka.” Take it for what you will, but be assured that the Iron & Wine / Calexico co-headlining tour will offer the audience some surprises along the way and promises a show-closing performance of In the Reins in its entirety.