Trending Stories from The Marquee
You are at:Home»Album Reviews»Dickey Betts heads back to where it all begins with Hall of Fame show DVD/CD release
By Marquee Magazine on October 1, 2005 Album Reviews 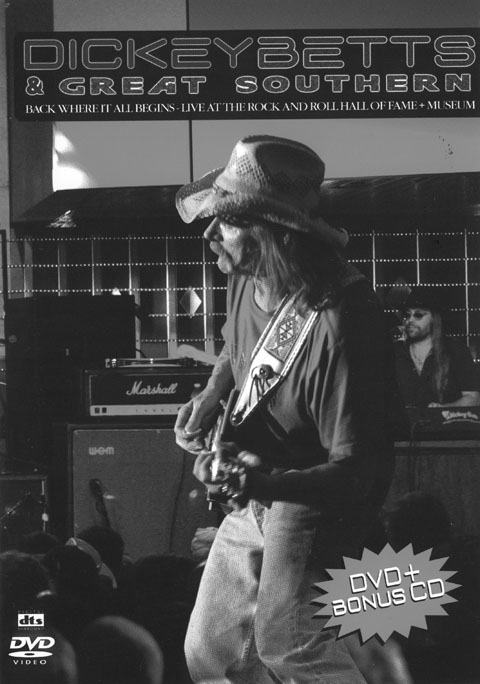 Fans of Dickey Betts will enjoy watching the Southern Rock hero lead his band Great Southern through a soulful, if somewhat subdued, 12-song set. Fans of the Allman Brothers be warned, though, as you could be somewhat disappointed while watching this DVD recorded at the Rock and Roll Hall of Fame on September 29, 2004.

Betts sings signature tunes such as “Blue Sky” and “Ramblin’ Man” and all is good. Michael Kach takes the vocals over from behind his Hammond organ for a few of the songs as well. On the opening “Statesboro Blues,” Kach playfully adds the lyric, “I ain’t Gregg Allman baby.” Well, his point is glaringly obvious to anyone listening.

Nevertheless, Betts’ playing is sharp throughout, as his fingers still manage to magically find harmonics all over the fretboard. Prefaced with a verbal nod to Jerry Garcia, Betts begins “Blue Sky” by intertwining the signature riff with licks from the Grateful Dead’s “Franklin’s Tower.” Although his erstwhile ‘brothers’ are elsewhere, Betts keeps it in the family by having his “pride and joy” — son Duane Betts on guitar — join the band for the instrumental “In Memory of Elizabeth Reed.”

An accompanying five-song CD of soundcheck versions of familiar songs provides an interesting listening alternative. The DVD also includes an interview with Betts discussing selected tracks. So, if you are looking for hard-rocking Allman Brother blues then you might want to look elsewhere; but, for the country-infused sound of Dickey Betts & Great Southern, you will appreciate this DVD.