Trending Stories from The Marquee
You are at:Home»Interviews»Jason Mraz, aka Mr. A-Z
By Marquee Magazine on October 1, 2005 Interviews, Reviews, Yvette Rebik 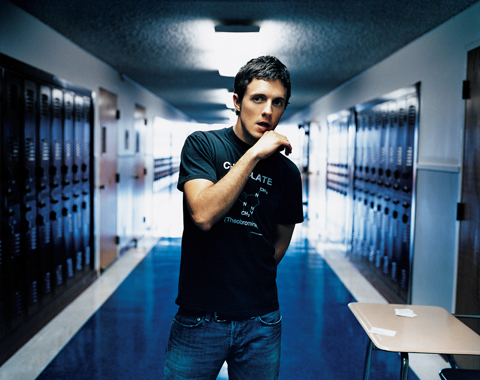 Following an artist through a year of their life is not something that most fans are afforded. But fans of the hip-hop influenced singer/songwriter Jason Mraz are getting exactly that opportunity with the release of Mraz’s sophomore release Mr. A – Z.

The album is exactly 365 days of Mraz, all packed into just under one hour. Mr. A-Z took exactly one year to make, from the day the first word was scripted in January 2004 to mastering in January 2005.

Calling from San Diego, Calif., where he now lives, the Mechanicsville, Va., native had recently returned from Japan. Taking the trip as a break, he enjoyed his time off before hitting the road in late September to promote his pseudo self-titled release, a tour which will strip his sound back to that of an intimate solo artist, in lieu of the full band which he had toured with after the release of his major label debut, Waiting for My Rocket to Come.” And while Mraz has spent enough time on the road to be a salty road warrior, he said he’s looking forward to getting back out and into the zone — for the most part.

“I love touring, especially when it’s three to four weeks into it. You get into a zone and things happen on tour that you can’t expect. But at the same time, on most days, I feel like a traveling salesman who is trying to meet his quota,” Mraz said.

Mraz’s mixed emotions regarding touring continued as he explained his early days on the road. He and his band drove everywhere and saw breathtaking sunrises before the lavish tour bus came along. Because the bus travels at night, he never sees the road moving by him anymore. “You really have to push yourself to see things and be inspired by things again,” he said.

Leaving home for life on the road, at least for a few months, made the skat master’s heart ache. The great surf, warm weather and work on his house made him not want to leave. “Deep down I love this pain I’m feeling because as much as I’m going to miss my girlfriend and house, I’m going to love the tour. Life is a little too perfect sometimes,” he said.

With the addition of some acoustic shows, which are Mraz’s favorite, his tour will bring fans back to his coffee shop days. His mind can wander freely without the worries of five other guys moving with him. Mraz invites his audience to a quieter world of spirituality and intimacy during these shows.

“I’m going out into the world and being this image that has been promoted about me. When you put it out there, people think they know you because of such and such. That stuff catches me off guard,” he said. “I forget how people know me. The fact that I talk about myself all the time, it can drive you crazy.”

And though it does drive him crazy, Mraz said that it’s part of what Mr. A – Z is all about. “While the reality-based tongue-in-cheek wordsmithing of Rocket is back again, I also wanted this album to suggest that I was ready to reveal a little more about myself,” he said.  Many think that musicians have the easiest jobs but, according to Mraz, it’s a nightmare in the sense that it seems that those in the spotlight are constantly giving up something, a secret part of themselves that should be kept private. “It’s tricky. I want to be truthful about this whole thing, but you have to keep things locked away,” he said. Even answering questions during an interview can become a repetitive process. “If I say the same answer to a question I get twice, then I start to feel like a robot. I then start to not even believe what I’m saying. It becomes an answer, not a feeling anymore … The stories within these songs find your Humble Kind of Denial having a go at my own placement in relationships lost and found again, in the ever-changing music business, as a geek and an artist and, at times, a controversially unpopular smoker just trying to breathe freely.”