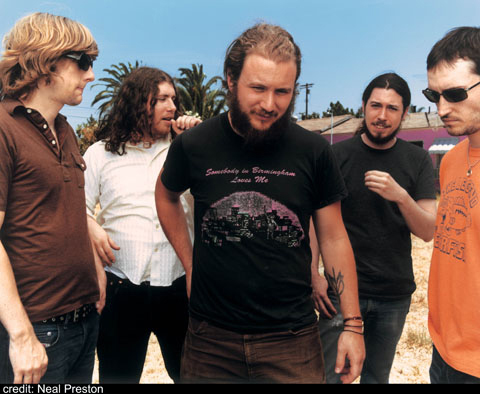 If My Morning Jacket were an article of clothing, it wouldn’t fall under casual garb, for sure. It would be something ragged and rugged, yet cleaned, pressed and donned for special occasions, or even church. Not religious-type church — although you might get some exposure to that too — My Morning Jacket would fit best worn entering the hallowed halls of rock and roll and the Church of Reverb.

My Morning Jacket is, in fact, not an article of clothing, but a five piece Kentucky-based rock quintet that was born, raised and baptized in that Church of Reverb — a gargantuan sweeping temple with limitless ceilings and speakers as large as Peterbilt sleeper cabs. And, with its latest release, the band’s fourth full-length album, Z, its as if the band has graduated from altar boy to high priest.

While the album’s single-letter title has an air of finality to it, lead singer and author of My Morning Jacket’s songs, Jim James, said in a recent interview with The Marquee that the end is not something that’s even in the band’s vocabulary right now.

“I speak through music and lyrics, so with the title I wanted to get away from speaking and use something that didn’t mean anything at all — just one letter not connected to any other letters or vowels at all,” James said in his quiet, almost melancholy tone which has just a pinch of a Southern twang to it. In his dry but cutting wit, he added, “I like the shape of it. You can bend it to make a triangle. You can lop off one end to make a 7. I feel like it had a lot going for it.”

But then James mentions something that makes it all seem obvious. “It’s also the last letter, the 26th letter in the alphabet, and I wrote all the songs when I was 26,” he said.

It appears that James’ 26th year was an adventurous one. The songwriter, who is now a mere 27, took great daring leaps with his voice on the new album, and in doing so, comes away more immaculate than even the band’s highly praised previous effort, 2003’s ATO/RCA release It Still Moves, the band’s debut album for the label.

Z breathes with a requisite sense of the unknown, heightened by the band’s unique arrangements and employment of exotic soundscapes. The driving force of songs like “Off the Record,” or the haunting confessions of “It Beats for You,” bring forth the true shape of Z, almost familiar yet ever-reaching into new territory. Songs such as “Knot Comes Loose” reacquaint the pure song writing and the spiritual singing of James, while “Lay Low” becomes an extension of those qualities coupled with an un-ironic guitar assault courtesy of James and Carl Broemel. Patrick Hallahan (drums), Two Tone Tommy (bass) and Bo Koster (keys) lay down a soulful rhythm on “Wordless Chorus,” which gives James the perfect launching pad for his celestial voice to reach un-charted heights.

In order to gain access to those heights, James and company left their thoroughbred-laden home of Louisville and travelled to upstate New York’s Allaire Studios to record the album. “We went from one comfort zone to another,” said James. “We were locked away on top of a mountain and we stayed there for the better part of a month.”

All of the songs that the band was in the process of putting down had been written beforehand and the band had spent quite a bit of time rehearsing, as well as playing some songs on the road before entering the studio, but none of the songs were completed. “We were still doing finishing touches. They were 90 percent done, but we always like to leave that window of opportunity,” James said.

Leaving that window open for the Z sessions was probably even more important than on past albums. For the first time, My Morning Jacket worked with a producer and the insight he brought to the table was one that James said was quite appreciated. Part of never having had a producer before was a pride thing, said James, who has produced all previous My Morning Jacket releases. “And the other part was that I have never found anyone I could give my baby to, based on their roster or what they’d done before. Once you know the person is talented, the other half is their personality. Are they going to come in and push you around and make you put your verses here and choruses here?” James said.
Enter legendary producer John Leckie (Pink Floyd, The Beatles, Radiohead).

James went to meet and hang out with Leckie before the sessions and found themselves to be of similar qualities — quiet, kind of reserved and laid back. “Once we got into it, his talent was really making the band feel comfortable,” said James. “But, he also wasn’t afraid to be the asshole, or the one who says, ‘You know, that take wasn’t good.’ Or, ‘That vocal wasn’t great and you can do better.’”

James said that insight was important to the boys, who have always had the D.I.Y. approach. “Sometimes when everybody in the band is just there, you know, people don’t want to hurt anyone’s feelings, or you might think that it was a good take because everyone is tired. We really learned the value of having another ear there,” said James.

While James is thrilled with the end result of the album, however, he said that he wouldn’t trade the band’s earlier works and self-produced albums if he could. “We do have records that might have some mistakes or have some records that don’t sound great — not because we wanted to make a lo-fi record, but because we were only 20 and we didn’t have any money,” he said, adding that those early adventures give My Morning Jacket a sense of history that James feels many bands who simply pop out of nowhere with a smash album don’t have.

James said too that the band took a bit of a minimalist approach to Z, using the old adage that sometimes the notes that are not played are just as important as the ones which are played. “On all of our records we always tried to do a ton of stuff,” said James. “You know, have a ton of vocals and two guitars harmonizing and acoustic guitars and reverb on all of the drums — you know, this huge wall of stuff going on, and on Z we wanted to be conscious of not doing anything unless you really needed to do it. Like to have no guitars or no keyboards come in until halfway through the song. On It Still Moves it was like, ‘1, 2, 3, 4 everybody start playing’. This one we tried to get everyone not to play unless they had too.”

Even the band’s infamous sixth member, Reverb, which the band actually refers to as a person, took a cautious approach on Z, according to James. He laughed at my comment that while it’s still quite prevalent that the band members are disciples of the Church of Reverb, it seems as if they aren’t attending every week. “I think he (Reverb) plays just like the rest of us. He kind of waits until he needs to come in. On a song like ‘Wordless Chorus’ I don’t think it would have as much impact when the chorus hits if the verse wasn’t drier,” said James.

The album’s cover art, as well, takes on the less-is-more approach — in theory, anyway. The cartoon-like painting, titled “The World Within,” by Kathleen Wiley, shows three birds operating on another bird, who is cut and held open revealing ‘internal organs’ of skyscrapers, highways and cars (it’s not as gruesome as it sounds). “I thought it set a good tone about the world within us and going inside and being more within yourself, is how I took it,” James said. “It’s something that I try really hard to do, to stop thinking and stop the mental noise and chatter in my mind. It really is like static, just a thousand voices and mental movies in your mind and when you stop and you just concentrate on your surroundings or where you are, it’s really like turning off a loud radio that’s just playing a bunch of shit,” explained James.

With Z being the band’s second release with RCA/ATO, it’s reasonable to think that the label has begun to put its touches on the band and its sound, but James said that, in fact, the label has been incredibly supportive. “I have nothing but props to give to RCA and ATO. They took a risky venture with us ‘cause we’re not an easily marketable band,” he said. “We’re not a bunch of cute young guys that wear tight leather pants and all that stuff for all of the little girls. We don’t try to write radio singles and stuff like that, but they’ve been nothing but supportive and never once tried to step into the studio and tell us that we couldn’t do something or that we had to do this or had to do that.”

So while My Morning Jacket continues to take great strides with each album it releases, and the band’s popularity continues to grow, it does not appear that My Morning Jacket will soon become discarded clothing left on the front porch for the Salvation Army truck to pick up. In fact, it appears as if the jacket will be carefully cleaned, mended and kept around as an heirloom for regular visits to the halls of rock and roll.

Spectate if you Gravitate:
• The Flaming Lips
• Neil Young and Crazy Horse
• Wilco