Trending Stories from The Marquee
You are at:Home»Brandon Daviet»Stryper! GET DOWN!
By Marquee Magazine on October 1, 2005 Brandon Daviet, Features, Interviews 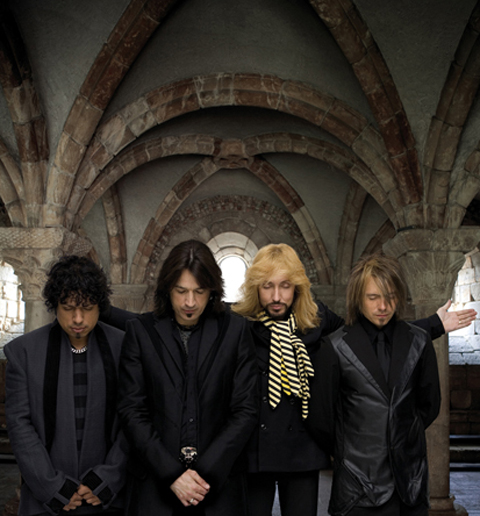 It’s been 15 years since Stryper, one of the first and easily the most recognizable of the Christian metal bands, released their last studio album Against the Law. That may not be a whole lot of time when compared to the texts of the Bible, but it is a lifetime when you are talking about rock and roll. In fact, 15 years represents the entire career of southern rockers The Black Crowes, so far, and is also roughly the amount of time Axl Rose has spent trying to make a new Gun’s ’n Roses album.

So it’s no surprise that when Stryper announced they were coming out of retirement to do a tour and test the proverbial waters of their popularity, critics and fans alike were skeptical. No one can say for sure if it was divine intervention or not, but the fact is that Stryper’s return was successful enough (the band drew over 1,000 people to their 2003 performance at the Ogden Theatre) to warrant a full-scale reunion and a new album aptly titled Reborn.

Stryper’s singer and creative force Michael Sweet recently took the time to enlighten The Marquee on the band’s new album and resurrection.

“We tried to update the band’s sound without making the album sound dated,” said Sweet. “We wanted to capture all of the things that fans have come to expect from a Stryper album while leaving some of the effects we used on the last few records behind.”

The band’s approach to the record, a group of songs that actually started as a solo project for Michael Sweet, seems to have paid off; Reborn is a solid metal record that can easily stand along side the new wave of Christian metal bands but still retains the classic hallmarks of Stryper albums like Soldiers Under Command and the band’s platinum album To Hell With the Devil.

“When I was shopping the album as a solo disc everyone that heard it was like, ‘There is really something here,’ so I made a few calls to Oz Fox (the band’s founding guitarist) and a few others and we decided to re-record some of the album and make it a Stryper album,” Sweet says about the album’s creation.

In addition to Oz Fox, Stryper is rounded out by Michael’s brother Robert Sweet, whose amazing drumming is easily one of the best parts of Stryper’s sound, and bassist Tracy Ferrie, who replaced original member Tim Gaines. “Tim just wanted to step out and do some different things and he wasn’t completely happy with some of the harder edged music that the band was making, but it was a mutual split and we still love him dearly,” said Sweet. “Tracy has brought a lot of new ideas to the band and we are happy to be able to have such a great musician join our ranks.”

For Stryper, who have always practiced what they preach, finding stardom alongside bands like Mötley Crüe and Ratt proved a real challenge for them as they followed God’s path for the band. “The ’80s were difficult at times, it is a lot less difficult when you surround yourself with people and things that represent God. I mean if we get up on Sunday and have church in the back of the bus we find it’s a lot less difficult to resist temptations and all the garbage that the world has to offer,” said Sweet.

In addition, the band has had to deal with a new generation of fans that have distanced themselves from organized religion. “It’s one of those things where you have to open yourself to God’s word, if you are closed-minded and put up a wall you are not going to hear anything,” said Sweet. “There were times in my life where I was really rebellious and didn’t want to hear anything and I didn’t want to hear anything about God, and then I reached out and took that little baby step and started listening, then the flood gates opened. I can tell people this life doesn’t have that much to offer and I don’t mean that in a negative way, I mean that in the best way possible. What I mean is there is more to this life, we are all going to step into eternity someday and that’s when we are all going to have to ask ourselves where do we want to go.”