Trending Stories from The Marquee
You are at:Home»Features»System of a Down
By Marquee Magazine on October 1, 2005 Features, Interviews, Jeffrey V. Smith, News

Unconventional music, CD concept propel System of a Down to the top of metal 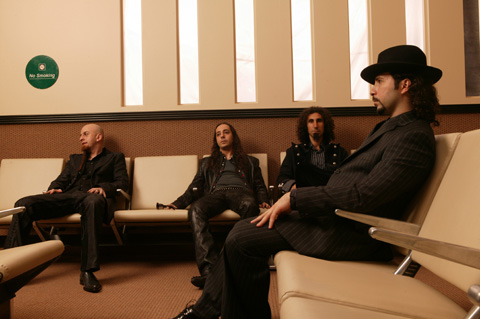 Wild Creativity, unique instrumentation, one-of-a-kind lyrical passion, tricky time and structural shifts, and Eastern European folk music with operatic influences are descriptions not commonly used to portray a band outside the world of jazz or jam bands. Certainly not a metal band. But System of a Down, the current reigning champion of metal around the world, is all that and more.

The unlikely mix of ingredients, styles and politics that encompasses System of a Down’s sound would not normally equate to popularity, and its members are as surprised as anyone that it has. It is, after all, widely considered to be one of the most original, wholly unique bands recording today — not something the masses usually accept. Newsweek calls it “prog-rock-metal-politico-pop with an operatic twist” while the Los Angeles Times suggests it’s as if the “Marx Brothers took possession of Metallica and hired Frank Zappa as arranger.” Sounds strange, but it is in fact not only extremely popular, it’s wildly addicting and begs the question why more bands don’t do it the S.O.A.D. way.

The Los Angeles-based band—comprised of four Armenian Americans, two of which were born in Lebanon, one in Armenia and another in Hollywood — formed in 1995 after former schoolmates reunited in the same recording studio with their respective bands. Vocalist Serj Tankian, guitarist Daron Malakian, bassist Shavo Odadjian, and drummer John Dolmayan have never looked back. Their self-titled debut was released in 1998, after years of touring and growing a fan base, and was followed in 2001 by Toxicity, which found unexpected commercial success with songs like the number one “Aerials,” “Chop Suey!” and “Toxicity.” The latest release, Mezmerize, which debuted at the top of the Billboard charts, was released in May and is the first half of a two-part CD set. The highly anticipated part two, Hypnotize, drops in mid-November and is expected to sell just as well as the first. The packaging for the new release is specially designed to physically join together with the prior release, creating one unified product with continuous artwork. More importantly, the albums interlock musically.  The final track on Hypnotize, “Soldier Side,” completes “Soldier Side Intro,” which appears as the opening track on Mezmerize.

The improbable success of the act can be attributed to its unconventional approach to making music, but it’s the unseen musical genius behind it that has propelled it to the top. Guitarist and songwriter Daran Malakian is the band’s driving force and is a self-described gear-head and music geek. It’s all he does. He also does a lot of musical experimentation and has even gone so far as covering his walls and ceiling with dozens of acoustic guitars so the sounds from his amps resonate with the guitar strings, creating a “really unique” tone. Malakian also explained that while recording the latest CDs he would spend days working on a single snare drum sound. “Music’s my life,” he explained.

Adding to the brain power behind the scenes is the band’s producer, Rick Rubin, another collaborator whose overriding passion is creating great music. The producer is one of today’s most important and is credited with helping Run D.M.C., Beastie Boys, Red Hot Chili Peppers, and Rage Against the Machine, among others, to reach the top. His work with Johnny Cash, Tom Petty and Donovan is also well known and respected. Malakian, who has produced each of the band’s CDs with Rubin, explained that Rubin “gives us an honest and straightforward point of view on what we’re doing. He’ll tell us which songs or which parts stand out in a particular song.” There is little doubt he’s been instrumental in helping S.O.A.D. put its best foot forward.

In the end, S.O.A.D. sounds more like a senior-year art school project than a mainstream music group, In fact, the band’s vocalist, Tankian, explained that “We’re artists for the sake of art” and that the band’s expression “is pure and natural” in terms of where it comes from. “I think that’s always better with art, because once you have something in mind and you try to achieve it, it becomes less pure in some ways. If you just let whatever expression there is come out, I think it’s more potent. I think it’s more real,” said Tankian.

The band sets itself even further away from the pack with its fearless attitude toward the future and doing new things. According to Malakian, “Some bands are afraid of their fans” and worry that they’re not going to like a new direction. “We don’t have that mindset,” he said. “We’ve gotta impress ourselves before we impress the fans—you gotta love yourself first.”

Speaking of fans, the band’s members have developed a deep relationship with theirs over the years. “The impact that we’ve had on people, artistically, socially and politically, is pretty amazing,” Tankian said. “A lot of bands are marketed by labels to certain demographics. With us it was just the opposite from day one.” The band toured heavily and built up a fan base before they did any video or radio. “That’s the old-fashioned way, and it’s how bands should be broken. And that’s why I think — luckily — we’ve had a good long career, and one that’s perpetually increasing. We’re not an overnight-success kind of band.”

No matter what might be behind the band’s success, it is certainly worth a listen whether you enjoy heavy or quirky sounds or simply artfully created music. Since the band’s own description of itself runs the gamut from Metallica to Frank Zappa to Gilbert & Sullivan to Armenian folk tunes, and features lyrics involving war, religion, politics, love, genocide, drugs, sex, injustice and having a good time, there is likely some part of their sound that’s up your alley. Rest assured, however, this is no pansy metal band. They can thrash as hard as any band, they just choose to do it with an artist’s flair.