Trending Stories from The Marquee
You are at:Home»Album Reviews»CD Reviews
By Marquee Magazine on November 1, 2005 Album Reviews, Brian F. Johnson 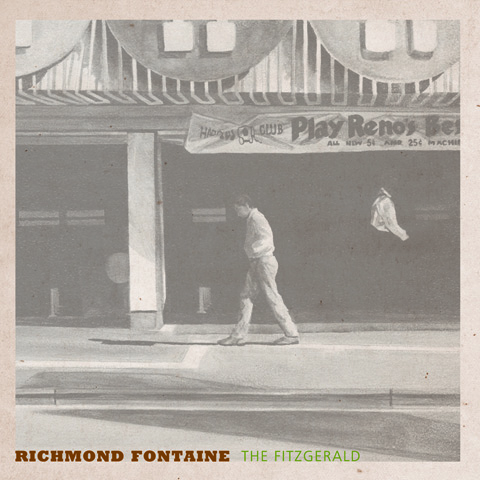 There are no sadder songs.

Writer Willy Vlautin looks deep into the faces we all turn away from, and stares out from their eyes, feels their desperation and embodies their resignation, envisions their hopeless hopes, delivering it in a voice that hovers on the nether side of faltering strength and failing faith. In the wake of Winnemucca, on the heels of Post to Wire, the band Richmond Fontaine delivers the third piece in a masterful trilogy that exposes the underside of the invisible America.

Cast in a sparse musical landscape, unsettling in its austerity, reflecting the barren truth of lives “broken, blown, lost and blue,” The Fitzgerald opens with a delicately circular guitar figure, introducing an encompassing atmosphere of isolation, supported by a gentle but matter-of-fact trapped voice of acceptance, detailing the everyday horrors of lives “too late to leave.” The characters that populate these dark tales are vividly drawn in short, exact bursts, not described but created, in their actions, in the shadows of their powerlessness, in the bottoms of the glasses that they down in the bars that they haunt.

Beginning first where debts are paid with broken hands and bloody faces in “The Warehouse Life,” to where nightmares are ignited by howling winds and blood-soaked shirts, and you fall into uneasy sleep in “Welhorn Yards,” to a drunken world with no escape in “Black Road,” to the unsettling sleeplessness induced by the discovery of a young man’s body in “The Incident At Conklin Creek,” there is a genuinely unrelenting terror in the wounding of the wounded in these songs.

Paul Brainard’s funereal piano, Sean Oldham’s quivering martial high hats and the shuddering violin of Liza Reitz, escort the mournful voice of Willy Vlautin as it descends into the madness that embraces and is consumed by gloom, darkness and heartache in “Disappeared.”

In the song “Exit 194B” Willy sings, “there was a darkness in both of us that neither was strong enough to escape.” This is not escapist fare.

In many ways, all of the characters in all of these songs are the American desaparecidos, we’ve shut the blinds on them, hidden them, lost them, abandoned children “dragging a suitcase by a piece of rope,” unloved teens, “always walked with his head down, always staring at the ground,” battered wives who stay “no charges did she file,” and those that run away “don’t look and it won’t hurt,” the denied and excluded, hoping someone will shine a light, and save their lives.

As Richmond Fontaine, Willy Vlautin, guitars, songs and vocals, the solid bottom, Dave Harding on bass, Sean Oldham, drums, with Paul Brainard guitar and piano, Mike Coykendall engineering and contributing baritone guitar and harmonica, Liza Reitz on accordion, as well as violin, and JD Foster on keyboards and production duties, have  created a troubling work of sorrowful beauty. This is a band that rewards discovery with a depth of emotion unequaled in what is usually labeled alternative country.

David Dodd, who has for the last 10 years been the tireless creator and keeper of the Annotated Grateful Dead Lyrics website, is either certifiably insane, a genius, or both. The verdict is still out.

For over a decade now, Dodd has been engrossed in the search to answer questions about  the lyrics of the Grateful Dead. Who is Crazy Otton in “Ramble on Rose?” What is a Dark Star? Does the line “Let him cast a stone at me” in “Playing in the Band” refer to the New Testament passage in John 8, or is it more indicative of the reference from Matthew 7:1-5?

These are the thoughts that rattle through Dodd’s mind, who has recently taken his gargantuan collection of annotations from the web and put them into one of the most beautiful and massive Grateful Dead lyrics books to date.

“I just love to look for little factoids and trivia. When you work at a reference desk in a busy library and work with the public, you get asked everything under the sun, everyday,” said Dodd in a recent interview with The Marquee. Dodd, who is the city librarian of San Rafael, Calif., said that originally, he thought of annotating the lyrics of the Grateful Dead as a way to improve his own reference skills — surely, if he could figure out who Mr. Benson from “Candy-man” is, he could help the public with their obscure questions.

Some questions, though, sent Dodd into crazy subcultures of subcultures. For instance, despite all of his research, Dodd is still not able to say with exact certainty what is meant by a “Double-E Waterfall” in “China Cat Sunflower.” In his quest to determine this line in particular, he looked at Bob Dylan’s “It Takes a Lot to Laugh, It Takes a Train to Cry,” which mentions catching a Double-E Train. Dodd interviewed train people and found that it could, in fact, refer to a double express or double-ender train, but he also found that it could refer to a painting by poet e.e. cummings titled “Waterfall,” and that it could refer to a guitar chord by the same name, played high up on the neck of a guitar.

Though Dodd is an integral part of the extended Grateful Dead family, he never was able to ask lyricist Robert Hunter what he meant, and to Dodd, this is a blessing. “I never had the option to contact Robert and that, to me, in a way makes it fun, because it makes it so that all of these things are possibilities,” Dodd said.

Overall, Dodd annotated about 250 songs, in chronological order, and even the most educated Dead Head will be shocked at the vast amount of titles that never became part of their  repertoire.

Though much of the material in the book is and will continue to be available through Dodd’s annotated lyrics website, the book brings with it a forward by Robert Hunter, a preface by Alan Trist and illustrations by Jim Carpenter, which are not available on the web. The book, Dodd commented, is a “snapshot” of where the project is now, and with that thought in mind, future editions are certainly possible.

As for Dodd, he said much of his focus will stay with his current job at the San Rafael Library, but that he might also delve into another annotation project. He has joked about annotating The Beatles repertoire for years, and he said that he may begin to look into it with more fervor in the near future.

There may be a myriad of “coffee table books” available about the Grateul Dead, but none bring more insight and passion into the stories behind the stories as this, and none will make readers more enlightened, engrossed and perplexed. The Complete Annotated Lyrics of the Grateful Dead is the jewel among gems.

He’s been successful twice before with the acoustic bluegrassy-ish Single Malt Band and as part of The Wayfarers, which was deemed one of the “best traditional Irish acts in the American Southwest.” And his kind, humble nature is as awe-inspiring as his playing.

Jefferson Hamer is the darling of the Front Range music scene and his newest album, Left Wing Sweetheart, is sweetly honest and displays Hamer’s roots along with his newest renditions of what music should be.

The album of original songs, which will be released this month, with a CD release party at Trilogy on Nov. 10, was recorded alongside Ben Kaufmann, not only of the Yonder Mountain String Band but also of the same Massachusetts high school Hamer attended before he hit CU. Along with Kaufman, is a veritable who’s who of Front Range musicians, including Sally Van Meter, KC Groves, Eric Deutsch and Mark Dalio.

Left Wing Sweetheart is, simply put, the album that Hamer needed to make. It’s a daring departure for the musician — a collection of songs which take Hamer out of his comfort zone, but in doing so, finds him as relaxed as a grandpa with a Sunday-morning paper.

Sometimes twangy, sometimes rockin’ and always heart-felt, Left Wing Sweetheart is as diverse as can be, without jumping all over the place.

Perhaps the only way to express the bright-eyed album’s sunny core is by words of advice on Hamer’s website: “Keep picking, listening to music, pile your bedside books high, get outside once in a while, and remember — records sound better than CDs.”

Chute Nine’s formula is fairly simple; take line-dancing soul, folky story-telling and a twanged out version of Boston, add a bassist named Stingray, open for Dierks Bently or Chelly Wright and play your country heart out for fans nationally.

Their newest album, Love & Hate, while a bit much for this city girl, shows a progressive side of country that could make anyone nostalgic for Wranglers and cowboy boots. “Hound Dog,” the album’s fifth track, illuminates the band’s rowdier side while the opening track, “Do You Still Do It,” is the closest to thing to a break-up song on the album. “Music American,” should have made its debut during the tractor scene of Footloose and the hidden track, “You Ain’t Seen Nothing Like It’s,” belongs at the opening set for a Van Halen show in Memphis. These truly complex country boys are proud of the “saddle-shaking, straight-shootin’ brand of country” that they have mastered on this album.