Trending Stories from The Marquee
You are at:Home»Features»Aquarium Rescue Unit, with Herring and the Colonel, swim into Front Range
By Marquee Magazine on January 1, 2006 Features, Interviews, Jeffrey V. Smith 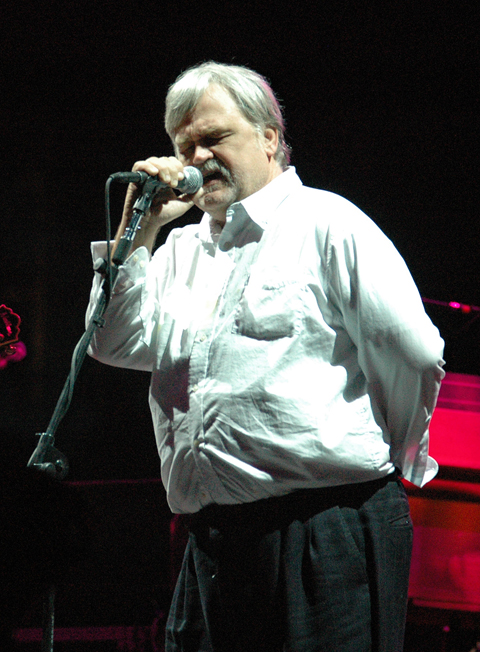 For respected rock-fusion guitarist Jimmy Herring, stepping back into his role in Aquarium Rescue Unit (ARU) will be like putting on a pair of favorite shoes he hasn’t worn in a while. “It’ll just be so comfortable,” he recently told The Marquee. The band, which was a favorite of the early ’90s pre-jam band explosion, reunites briefly for a pair of shows at the Fox Theatre Friday and Saturday, January 20-21. The rare reunion shows are the only ones planned by the band at this time.

ARU’s roots go back to a once-a-week gig at Atlanta’s Little Five Points Inn that featured a rotating cast of musicians backing Col. Bruce Hampton and his unconventional “out” musical philosophy. The cover was non-existent, the beers were 99 cents and the musicians went without paychecks. “It wasn’t something we were looking to get paid for,” Herring explained. In fact, when he discovered the group “it was more like performance art than music.” Later, after Herring was asked to join the band along with mandolin player Matt Mundy, he explained that it  “turned more toward a musical side with a performance art twist. If you’ve got Bruce, there will always be some craziness,” he added.

According to the musician — who at the time had already attended classes at Berklee College of Music, graduated from the California Guitar Institute of Technology and taught classes at the Atlanta Institute of Music — playing with Hampton “was a liberating experience. It was all about us learning from him how to play yourself; how not to be just a parrot. It’s not like he’s this technical virtuoso or anything, but he’s in-touch with himself and so many virtuosos just aren’t.”

Herring said Hampton had that “one thing” that kept everyone in the band fascinated, which was “this dude can play himself no matter what.” While the guitarist maintains that Hampton’s music “might not be what mainstream America considers acceptable,” it was “really appealing” to the band’s members. “It was the one night a week we could play whatever we wanted. It was a real open situation.”

The cast of musicians that would eventually form the touring and recording band began to solidify when drummer Jeff Sipe , who went on to play with Colorado’s Leftover Salmon, hooked up with Hampton. After his first experience with Bruce, Herring immediately called his friend and bassist Oteil Burbridge, who is best known for his recent work with the Allman Brothers Band, and told him he had to check it out because it was so cathartic. Eventually, in 1989 they invited Herring to play. Initially, Mundy, Charles Williams and Jeff Mosier—who later founded Blueground Undergrass — also played in the band. “We just kinda followed Bruce around for about six years, and learned a lot,” Herring said of the experience.

When Herring finally joined the band, he had already been playing with Burbridge, Sipe (a.k.a. Apt. Q258) and Williams, but he was really drawn to the experience with Hampton “because it was real liberating. It wasn’t like anything else I’d ever done.” According to Herring, the music was “simple,” like roots music. “The simpler things are, from the start, the more you can improvise and do things with it,” he explained. “That was what that group was all about; taking the simplest things and just implying other things over it.” Those “other things” included a fusion of bluegrass, rock, Latin, jazz, and flawless chops.

The band, content with its once-a-week sessions of musical fun, began its rise in popularity in 1989 when members of Widespread Panic happened into the Little Five Points Inn and heard the act. “They started hanging with us and talking with us, saying we were crazy,” Herring said. Panic had a sold-out, three-night run at Atlanta’s Center Stage Theater the following week. While not intending to have an opening act, the members of Panic were so taken aback by what they had heard, they invited them to open each night of the run. They went on to invite ARU on full tours and helped expose the act to countless music fans as well as other musicians.

The act started to fade away shortly after the second release and while it never officially broke up, it simply stopped existing and only reformed sporadically. The dynamics started to change in 1993 when Mundy retired from music and returned home to Georgia. Within a year, Hampton retired from the road and left the band, citing health concerns. He later formed the Fiji Mariners and The Codetalkers. Following a short period featuring Burbridge on lead vocals, ARU added Paul Henson as its new front man. Without Hampton, however, the magic had left. Touring slowed down by 1996 and band members went their separate ways.

Despite moving on to gigs where he employed his legendary improvisational voyages with Jazz is Dead, The Dead, Phil & Friends, the Allman Brothers Band and several other acts, Herring is excited to come back together with his former bandmates in ARU. “Everybody’s interests have broadened since the day when we were actually living the experience and doing it full time,” he said.

Having the opportunity to play with Hampton taught Herring and his fellow band members plenty and allowed them to reach previously unknown musical areas — something they are excited to re-experience. “The best music we’ve ever played has been when we’re not doing it,” the guitarist said. “There used to be long stretches of time where we knew it wasn’t us doing it. That’s part of what we learned from Bruce, how to get out of our own way. It’s something that can’t be taught. You have to be around that type of atmosphere long enough for it to sink in. If you’re with a group of people, all capable people, and everyone is totally going for the same goal — which is to get out of your way and let the music play you instead of you play the music — that’s always the best stuff in my opinion.”

The two nights at the Fox Theatre feature a line-up as close to the original as possible, considering Matt Mundy no longer performs. In addition to Hampton, Herring, Sipe and Burbridge, Bobby Lee Rogers from The Codetalkers will be joining the band. “He’s a brilliant musician,” Herring said. “We miss Matt Mundy a lot. It’s never going be the same when you take an ingredient out of the mix.” A few of the band’s recent reunions — like last year’s Jamcruise — did not have a replacement for Mundy. “We went ahead and did it without anyone filling in because we always felt like you can’t replace him.” They feel a little different now, Herring explained. “You can’t replace him but you can put someone in that spot where their voice will fill that void.” Bobby fits the criteria perfectly and, according to Herring, knows Hampton as well as anyone. “He’ll fit in like a glove,” he said.