Trending Stories from The Marquee
You are at:Home»Features»Arrested Development continues to push what’s expected of hip-hop acts
By Marquee Magazine on January 1, 2006 Features, Interviews, Timothy Dwenger 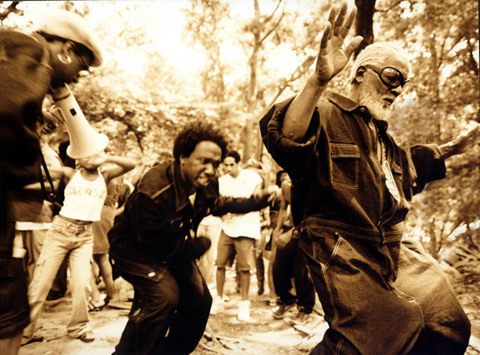 For teenagers today “Arrested Development” is a TV show on Fox that stars Hogan Family alum Jason Bateman and comic David Cross. For teenagers of the ’90s, Arrested Development was one of the hottest hip-hop acts around. Chart topping hits such as “Tennessee” and “Mr. Wendal” broke the hip-hop mold and are still viewed as unique contributions to an ever evolving genre.

Arrested Development’s leader and lyrical mastermind, Speech, spoke with The Marquee recently about his band, his solo career and the message that he brings with him to the stage. “We call ourselves 20th Century Africans. We are talking about self determination.  We want African people to have a sense of pride in who we are, a sense of accomplishment, and a vision of where we are going,” he said.

“Right now in the hip-hop industry you’ve got so many groups and artists that allow images of degradation, images that debase black women, and images that make us look like clowns on television. We strive to provide images that really project who we are and who we can be, even if our situation is desperate, and sometimes frustrating, as a people,” said Speech.

When Arrested Development first brought their “Life Music” to the stage in the early ’90s they showed up with drums and other live instruments in a time when hip-hop relied largely on prerecorded instrumentation. “We had these live drums on stage at a time when two turntables were more than enough to ask for, and most people were dealing with just a DAT machine,” recalled Speech.

Their music also broke down another barrier in hip-hop that hadn’t been pushed by other acts at the time, melodic rapping. “‘Tennessee’ and ‘Raining Revolution’ and some of the other songs on our first album were really some of the first times that a person capitalized on that style,” said Speech. The melodic rapping style that Speech pioneered propelled Arrested Development up the charts at a meteoric pace. They were a hip-hop act that was appealing to a whole new audience, an audience who felt this kind of hip-hop was different because they could sing along to a melody and get down to a funky groove. It was, in short, a recipe for success.

This recipe includes what Speech feels is a key ingredient that is missing from most popular music in our culture. “Baba Oje, the Elder in our group, is now 73 years old. When I was putting the group together, I noticed that in many of the more beautiful cultures in the world, the elders are much more involved with the youth and the two groups really coexist,” said Speech. “In American, and other Western cultures, there is a real gap of ideals. The elders have the wisdom and the youth have the energy. I wanted to combine the wisdom of the elders with the energy of the youth.”

Baba Oje is currently out on the road with Arrested Development in their latest incarnation.  Speech claims that Oje is in better physical shape than anyone else in the group. “He is a rawist, he roller-skates, he dances and he sings. His role is multi-faceted and always exciting. He is a catalyst for us to be more real,” Speech said.

When faced with the reality that his solo career hasn’t been as successful in the states as were the days of Arrested Development, Speech isn’t fazed. “For my entire career I have been the type of artist that thinks that life is exciting. I wanna try it all and experience it all. America is a little conservative with what we allow artists to do,” he said. “I was trying to experiment with a whole different kind of energy on my first album after Arrested Development; I was wearing suits behind a Rhodes keyboard and was talking about hippies and escapism. I think they were like, ‘What is Speech on?’”

This conservative nature may have been rewarded, as Speech ended the hiatus of Arrested Development in 1999 and has taken the group on the road several times since. While not his full-time focus, Arrested Development is a creative outlet that he can’t ignore. “After being on our own for a while, we were curious to see what we were capable of and what kind of music we would come out with when we got back together,” said Speech.

Arrested Development has been playing to packed houses across the country off and on for the past five years. They sell out several-thousand-seat venues and shake the roofs off of dance clubs.  Speech describes their show as “very high energy,” and is thrilled that the young music lovers are still attracted to his sound.

“There is a whole new generation of hip-hop lovers today. In the early Nineties some of them were eight, nine or 10 years old and they weren’t seeing us live, they sort of heard about us. There is a sort of legendary status associated with Arrested Development,” he said. “These kids come out to our shows and they are amazed at the type of vibrancy that we have as a group and the type of culture we present. It is a total refreshing vibe from what they get in this generation.”