Trending Stories from The Marquee
You are at:Home»Features»Cake brings Unlimited Sunshine Tour to Denver with Tegan and Sara
By Marquee Magazine on January 1, 2006 Features, Interviews, Timothy Dwenger 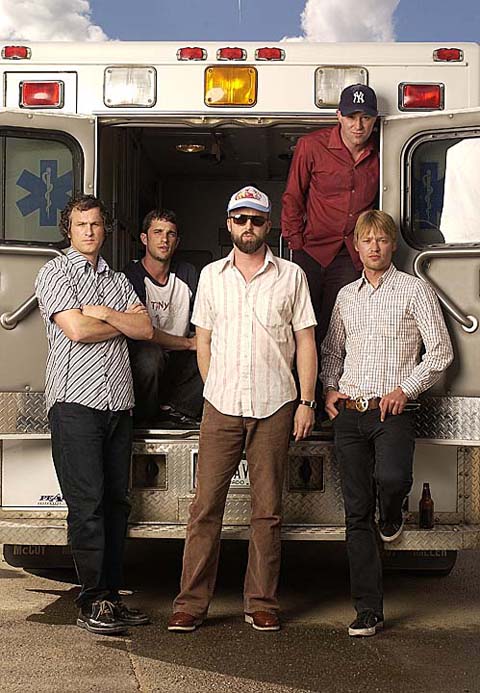 “I don’t wanna go to Sunset Strip. I don’t wanna feel the emptiness, bold marquees with stupid band names,” sings CAKE front man John McCrea in his unique speak-singing style.  According to his longtime bandmate and trumpeter, Vince DiFiore, McCrea harbors a certain disdain for the music business. In a recent interview from the band’s studio in Sacramento, DiFiore told The Marquee, “John took his music to L.A. and formed a band there. He felt like the industry was taking advantage of him and other people were going to own his songs. He just didn’t like the big rock scene on Sunset Boulevard, it seemed so overblown, so he moved back to Sacramento and started CAKE.”

This attitude, and CAKE’s strict do-it-yourself work ethic, has been something that the band has fiercely defended throughout their 15 year career.  They arrange, produce and record all their own material. McCrea even does all of their album artwork. CAKE’s early days with Capricorn Records set the stage for continued do-it-yourself success with a much bigger record label. “Once we had the success we did with Capricorn [Records], we moved over to Columbia [Records] and they understood that was how we wanted to do things.  We were able to write up all of our contracts to ensure we could continue to do it our way,” DiFiore said.

DiFiore acknowledged that some people may consider naming your band after a pile of empty calories held together by a gooey mixture of butter and sugar, stupid, but he disagrees. “The phonetic ‘umph’ of it works really well. It is a four-letter word that has the impact of shit, or fuck, without the curse word.”

“There weren’t any city codes against flyering around town when we were starting out,” said DiFiore. “A four letter word looked really good on the flyers we used to post. We would pick graphics that were juxtaposed to the word ‘cake’ and looked like a non-sequitor but were interesting and artistic in some way. The name really just works well on a lot of levels.”

This style of graphics that McCrea designs has graced the cover of all five of the band’s albums.  A pig, a crown, and a ’50s couple have been paired with the instantly recognizable CAKE name to create a highly effective branding tool that the band is proud of. “There is so much out there, so much to consume. We want to keep things uncluttered so they are easy to recognize,” DiFiore said.

In an effort to keep their indie roots in sight and help other bands on their way up, CAKE came up with the idea for the Unlimited Sunshine Tour. The festival-like format of the tour allows for the members of CAKE to hand pick other bands to join them on the road for a series of dates. “We played a lot of radio festivals over the years and wanted to do one our way, without all the marketing agendas. We have had some great bands on the tour in the past, bands like Cheap Trick, De La Soul, Modest Mouse, and The Flaming Lips,”  said Di Fiore.

This year’s support comes from indie songstresses Tegan and Sara and gypsy-punk rockers Gogol Bordello. Tegan and Sara have been generating significant buzz with their 2004 album So Jealous and have become something of indie rock sex symbols. Gogol Bordello was recently featured in the film Everything Is Illuminated, which featured their music as well as their front man and founder, Eugene Hutz, acting opposite The Lord of the Rings star Elijah Wood.

The tours’s MC and resident joke teller will be Sub-Pop comedian Eugene Mirman. His press materials relate the story that Mirman turned to comedy “after being called a commie and fag in junior high and high school.” Subsequently, he “developed a keen sense of humor as a defense mechanism,” and has evolved into a nationally known comedian who sometimes “blows people’s minds.”

The quirky, spoken songs of CAKE will be anchoring the evening’s festivities as they have on each of the previous Unlimited Sunshine tours.  With recent appearances at the Fox, Magness Arena and Red Rocks, CAKE has chosen the stage of the Fillmore Auditorium for this year’s outing.  Ironically, whether or not McCrea and his bandmates think it is stupid or not, the marquee on Colfax is already displaying, in anticipation of their arrival, big bold letters that read: CAKE.