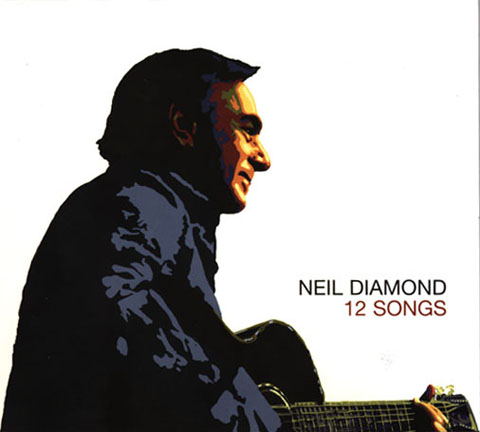 Who would have thought that a producer known for his work in hard rock and rap would help Neil Diamond, of all people, craft the best album he’s made in the last two decades, if not his entire career?

12 Songs shows the man who is known for sequins, cheesey love songs and the trite “rock” that some of our parents dig, as he once was — a brilliant songwriter who can make you cry, even when you’re smiling.

Much of the credit for Diamond’s return to his roots on 12 Songs can be credited to legendary producer Rick Rubin, who is best known for his work with hip-hop acts like LL Cool J and Jay Z, as well as hardcore acts like Slayer and System of a Down.

Rubin, according to a recent CNN article, who is a fan of classic Neil Diamond songs like “Solitary Man” and “Sweet Caroline,” had been calling Diamond for nearly a decade, but it wasn’t until three years ago that Diamond finally returned Rubin’s calls and agreed to meet with him.

That meeting may ultimately end up changing the way Diamond will some day be remembered.

The two sat down and listened to Diamond tracks of old, some that Diamond himself had not heard in years. Throughout those listening sessions one thing became clear — that Diamond, who had not played a guitar on one of his own records since the 1960s, had to pick one up again. That, Rubin was insistent about.

Rubin told CNN that Diamond sang differently when playing the guitar. “There was a purity to the vocal that was more natural and less of a performance. He was less able to think about what he was singing and it sounded better,” Rubin said.

The two reportedly fought over the issue while in the studio, but ultimately Diamond commented that Rubin had been right all along.

Diamond wrote in the liner notes of the album that to get the material for 12 Songs he locked himself in a studio with a “box of number 2 pencils, a big stack of my trusty yellow legal pads and a funky old three-quarter size Martin guitar with an E minor chord that could break your heart.”

“I told Rick that I’d call when I had some new things to play,” Diamond continues in the liner notes. He spent three months writing songs before sharing them with Rubin and when he finally did share the fruits of his labor, Rubin insisted on more labor.

“Rick was determined not to rush the process, but to wait until we got the essence of the songs I was working on. I loved the sheer freedom of creating music for its own sake,” Diamond wrote.

Ultimately, after nearly a year, Diamond came out with somewhere between 30 and 40 songs, with several of the songs that ended up on the album coming at the end of the marathon writing session.

The dozen songs that were finally chosen are some of the most heartfelt, beautiful and simple arrangements that the 64-year-old Diamond has ever created.

Beginning with a hauntingly melodic track titled “Oh, Mary,” Diamond strips away all of the pomp that has made him an arena-sized star over the years, resulting in one of the truest, most intimate glimpses of the singer that has ever been seen.

Love ballads like “Save Me a Saturday Night,” coupled with more groovy Diamond-esque tracks like “Delirious Love,” flow seemingly effortlessly through the CD. Despite all of the work put into the project, the true magic is that it comes across as if Uncle Neil sat down in a living room with an  acoustic guitar and played these songs perfectly for the first time, almost without thought.

With his raspy deep voice as strong as ever, tracks like the non-apologetic “I’m On To You” come across not like the hopped-up versions of his gargantuan live performances, but like tremendously delicate poems that still have enough power to move listeners.

Rubin’s persistent, tenacious pursuit of Diamond and his prodding to get the best out of this American icon will most certainly revitalize Diamond’s career, and will open up a whole new audience to this man, who was perilously close to slipping into obscurity, remembered simply as a musician that my mom used to like, and as a punch line by music aficionados. Fortunately, 12 Songs will keep that from happening.

Why aren’t these guys a household name yet?

Remedy Motel plays some of the most radio-friendly Americana that’s been produced in the last decade, and their newest album My Favorite Record is another example of how dumb the music listening public is. If it weren’t so dumb, these guys would be huge by now.

Mica Johnson’s vocals are the highlight of this Southern California band, but the boys playing behind him have the chops to keep it all more than entertaining.

This band is the perfect companion on the road in any kind of weather, as Remedy Motel’s road worthiness and musical beauty reveals itself behind every swerve in the road.

It was inevitable that Alan Yates, an engineer and live sound mixer from Atlanta, Ga., would eventually step out from behind the board and record his own tracks.

The engineer-turned-performer, who has worked with a gamut of artists from Collective Soul to Elton John, released his self-produced Mint Condition in 2003 to critical acclaim.

The follow-up, Red, brings Yates forward with his band in an intensely fun and inspiring blend of melodic pop rock.

Obviously, Yates has learned a thing or two at his normal seat behind the board. Red was recorded over a period of six months, a formula that he says helped the album ultimately turn out as “spontaneity with polish, but not unnatural perfection.”

One of Boulder’s best kept secrets is about to bust wide open.

Michael Lloyd Band will shortly look back on when they were just an obscurity. Their new release Highwaters, a six-song collection of some of the most professional piano rock to hit the Front Range since Ben Folds last visited here, is shockingly strong.

What’s most amazing is that the EP is a debut for the local act, but sounds as professional as Joe Jackson or, as another reviewer put it, “It’s as if Steely Dan were writing hip songs today.”

Singer/songwriter/pianist Mike Liquori studied jazz at CU Boulder and has surrounded himself with other alumni — as well as other Front Range staples — for the release, which should earn them an honorary doctorate it’s so good.

Rush’s R3O shows a stale version of the once greats

Unbelievable. Amazing. It made me a fan all over again. Unfortunately, that was just the packaging.

Rush’s new collosal R30 DVD and CD release is one of the best put together packages in a long time (it even comes with signed guitar picks and a backstage pass), but the recording of the band’s supposedly epic show in Frankfurt, Germany falls flat with energy. Even during Rush’s perfect performances of their fan favorites, something is missing. Maybe it’s that they’re getting old, but the show that once made these guys legendary seems a bit stale on R30. Even an absolutely stellar performance by the world’s best drummer, Neil Peart, on his signature song “Tom Sawyer” doesn’t revive the set, as Peart comes across as almost bored.

The days of their bad hair and big shows are gone, it’s sad to say.

There’s a reason that Michael Franti sells out venues whenever he comes to the Front Range. It’s because crowds here demand strong performances in music and showmanship and Franti delivers, seemingly effortlessly.

His new DVD Live in Sydney is a testament to that. Filmed in October of 2003, the DVD features a 10-track set that shows Franti and Spearhead frantic in the throes of their exuberant soul/hip-hop style songs and beautifully heartfelt in Franti’s emotional acoustic ballads.

The performance, filmed at the Hordern Pavilion in Sydney, highlights Franti’s global appeal. Since the beginning of his career, Franti has grown from an angry young political rapper to an artist who has morphed his social unease and passion for change with his love for music and his desire for world-wide unity and happiness.

The only problem with the DVD is its length, or lack there of, as the run time comes in at 70 minutes. The good thing, in fact the great thing, is that once the DVD has been viewed to death, viewers can take the DVD with them, flip it over and drop it in their CD player to hit the CD recording of the show on the other side. It’s a great convenience that more bands should do.

Special bonus features also show a recording session of “Ganja Baby,” an incredibly somber and heartfelt acoustic version of “Bomb the World,” and a beatbox session by Radio Active.

If Michael Franti and Spearhead keep performing shows with such enthusiasm, their desire to change the world may actually come to fruition. At least, it’s a nice thing to dream about while you watch them play.