Trending Stories from The Marquee
You are at:Home»Features»Denver’s indie rock scene gets hotter and smarter with the rise of Hot Iqs
By Marquee Magazine on January 1, 2006 Features, Interviews 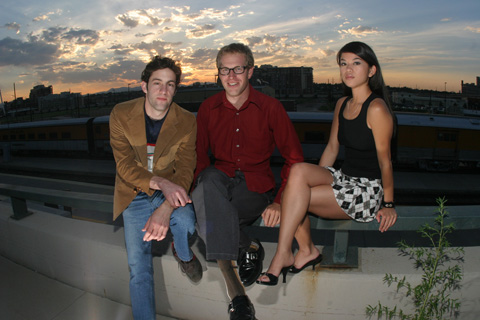 “We like hot girls with hot IQs,” croons Eli Mishkin, lead singer and guitarist for the Denver band Hot IQs on their debut album, 2004’s An Argument Between Brain and Feet, released on the independent Morning After Records. Their brand of smart lounge pop-rock has lately been earning the band critical acclaim, with opening spots for such established acts as Hot Hot Heat and Brian Jonestown Massacre. Fresh off a national tour opening for both Built to Spill and Tegan and Sara, Mishkin found time to talk with The Marquee about the band’s adjusting to life on the road and future plans.

“We were extremely lucky to tour with amazing bands that have huge followings, so we had the luxury of playing to hundreds, sometimes thousands of people a night, basically just piggybacking onto their existing fame,” he joked, adding that opening for indie legends Built To Spill recently was a special treat. “We really lucked out to have that opportunity as such a new touring band.”

The band, which is rounded out by Elaine Acosta (drums) and Bryan Feuchtinger (bass), is happy for the recent airplay and attention from labels, but they have remained humble about their inauspicious beginnings. “Elaine and I had known each other for a couple of years from being DJs together at the college radio station in Boulder. We hung out quite a bit, going to shows and talking about music obsessively. One day we were sitting in her apartment talking about all the concerts we’d been to and how great underground music is and we decided that we should become an underground band, kind of as a lark,” Mishkin said.

The two quickly got Acosta a drum set and Mishkin, who already played guitar, turned Acosta’s apartment into a rehearsal space. “We started practicing the next day in her apartment and quickly the police were called. Then for the next couple of weeks, they were called every day that we practiced. Our practicing wasn’t really practicing; it was just smashing on the drums and making noise because we didn’t know what we were doing. So that was the birth of the band,” said Mishkin.

The duo knew that they needed a bassist to round out the trio and looked to Feuchtinger to fill the spot. “Bryan had been playing drums for about 14 years but was new to the bass, so he brought that newness and the raw energy to the bass that we had to our instruments and … that was sort of the beginning of the end,” Mishkin said.

The raw energy certainly comes through on the album, and the instrumentation remains simple yet inexplicably dancey, showcasing Mishkin’s witty, sometimes sarcastic lyrics. “Hot IQs put the indie-rock chocolate in your disco peanut butter,” is how their website puts it.

The band soon played their first gig, even though they may not have been ready for the stage — they didn’t even have a name the first time they played as a band. “We had four songs and maybe a cover. I guess a few people saw something. They overlooked the fact that we were just making noise and couldn’t really perform or get across any real sound, but people saw a spark of something and I don’t know what it was, but I guess people still see that spark because we can still now just barely play songs, but we’re getting away with it,” Mishkin said.

That spark may soon grow into a fire, as the next album is expected in early spring. “We’re hoping to make a much bigger splash with it, national tours, more festivals, that type of thing,” he said.

The band is headed to the studio now, and they don’t have far to go, as they’ll be following the same formula as their debut, recording in Feuchtinger’s home studio. The label has yet to be determined.

“We have a pretty clear vision of how we want ourselves to sound, and that’s part of that controlling your own destiny aspect of independent music that we that we really gravitate towards. So we’re good to go ourselves on this one,” Mishkin said.

Mishkin said that the band isn’t necessarily anti- or pro-major label, but that their main goal is keeping things on the up and up. “Our main goal is pretty much coke and whores, so … No, really, any amount of integrity we can maintain with each level of success is, I think, our goal,” he joked.

Interesting fact: the band was originally called The Royal We. “We liked that name quite a bit, but five other bands in the country liked that name also. So, right before we released our album we decided to change to something we wouldn’t be sued for. And we changed to something that we created, which are the Hot IQs, which as far as we know is a wholly Hot IQs creation. We stole it from our song. I’d like to say that we did it for thematic reasons, but I think part of it was sheer laziness; because we liked the fact that we had a theme song already, and none of the other songs fit as a band name all that well,” Mishkin said.