Trending Stories from The Marquee
You are at:Home»Features»INXS takes to the road with new singer culled from reality TV show
By Marquee Magazine on January 1, 2006 Features, Interviews, Jonathan Keller 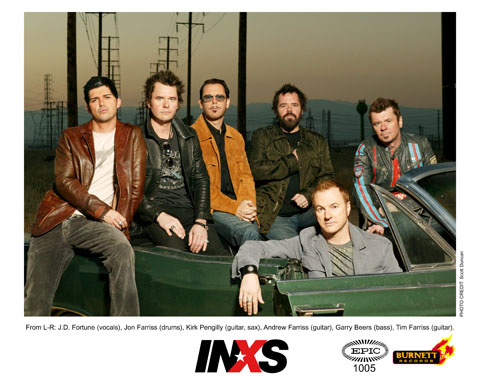 When most bands are looking for a new band member, particularly a lead singer, they stay close to home, roaming through their contact grapevine of friends and fellow musicians. INXS, however, decided to go a very different route. They let their biggest fans try out for their vacant lead singer slot in a televised contest. The winner of the contest would become the lead singer of INXS — recording a new studio album with the band and then fronting them on a world tour. It seems INXS has finally found their man.

This past summer INXS decided to let VH1 host a globally-aired reality program called “Rock Star INXS.” The kicker: The winner of the 13-week televised contest — a sort of “American Idol” with more volume and rock and roll — would take the crown title of INXS’ new lead singer. Needless to say, the show was a sleeper summer hit, bringing INXS into the living rooms of millions of households, reminding many viewers of the past glory INXS had experienced in the ’80s. By the season finale, INXS had whittled their way through a field of 15 vocalists and found their new equal. If his name has any bearing on his recent victory, 32-year-old J.D. Fortune is now riding a virgin wave of rock celebrity.

“On a scale of one to 10, the past few months have been at about 5000,” Fortune said in a recent interview with The Marquee. “It is tough, though.  The hardest part has been keeping up with them.  These guys work their asses off in every way.”

It has been quite a while since INXS has been in the minds and ears of popular music connoisseurs. Before the VH1 show aired, the reason was simple: INXS has not had an American hit in nearly 13 years and after the alleged suicide of vocalist Michael Hutchence in 1997, the band clearly lost direction. They cycled through three lead singers before agreeing to do the VH1 show. As a teen, Fortune was a big fan of INXS and now he sees INXS in two distinct incarnations: old and new.

“The INXS of old is the one I grew up on, the one that inspired me,” Fortune explained. “They are the reason I did the show. If it was any other band I probably wouldn’t have done it. Now, it is about respect and love for the band as we move forward.”

Originally started as a pub band hailing from Australia, INXS went on to become one of the Continent’s biggest musical exports by the late ’80s, globally recognized and rewarded through their album and single sales. Consisting of three brothers Andrew Farriss (guitar and keyboards), Tim Farriss (guitar), Jon Farriss (drums), and Gary Beers (bass), Kirk Pengilly (guitar, saxophone) and Hutchence, INXS released their eponymous debut in 1980 on Deluxe Records. The band released three more albums in the early ’80s before they had a solid international hit with 1985’s Listen Like Thieves, which worked its way up to #11 on the U.S. charts. Their following album Kick, released in 1987, solidified their international stardom, going multi-platinum in multiple countries and spawning four U.S. Top 10 singles: “Need You Tonight,” “Devil Inside,” “New Sensation,” and “Never Tear Us Apart.”

Fronted by the exuberant Hutchence, the band had another hit with its follow-up, X, before the grunge movement of the early ’90s had dated and brought the group back to earth. While other groups of the era such as U2 were able to adapt to the changing musical climate with their album Achtung Baby, for example, INXS fell short both commercially and critically with 1993’s raw sounding Full Moon, Dirty Hearts.

INXS released a few more albums in the mid-’90s, but by the time Hutchence was found dead in his Sydney hotel room in 1997 of an apparent self-hanging, the band was hitless and sliding more and more into obscurity.

VH1’s “Rock Star INXS” has brought the band back from the obscurity. With Fortune as the new front man the band hopes its latest release Switch and their recent television success will bring back some of the glory of old. The first step was letting Fortune contribute to the band as a whole.

“I was really flattered that the band accepted my musical contributions on the record,” Fortune said. “When I first started the show I thought it was going to be, ‘Okay here is song number one, song number two, song number eight.’ But we really had a blank canvas and literally worked 18 hours a day, writing and recording. I really enjoyed the recording process — painting pictures with sounds.”

Switch is an 11-track disc that has radio play written all over it. In a sense, it is commercially viable like the INXS singles of old, yet the sound of Switch is very much current with mainstream radio — slick and to the point (very few extended solos on this one). Anyone searching for the old INXS sound might find glimpses of it on the new album, but overall it is a new sound for INXS.

With Switch now on the table, INXS is embarking on a world tour in support of it, starting in January. This is something that is very new to Fortune. “My favorite part so far has been the recording but we have not really toured yet. We have just been doing press. I am sure when I get on stage in front of 20,000 people I will like touring more,” he said laughing.

Fortune, being much younger than the rest of the band, is still learning the ropes of life as a celebrity and the responsibilities of being a band front man. Luckily, the band seems patient and more than willing to make things work with him.

“No matter how much I screw up, they (the band) have been there before and probably done it,” Fortune said. “They can take me aside and let me know what is going on.” With more lessons to be learned on the road, Fortune sees a new successful start for INXS and with the marketing genius of the TV show, the band has received more press than most could ever imagine. The time for INXS is obviously now, and the charting of “Pretty Vegas” coming 22-and-a-half years after the appearance of the first INXS chart single shows that there is still quite a bit of life in them.