Trending Stories from The Marquee
You are at:Home»Features»Planes Mistaken for Stars still cruising at altitude despite recent line-up changes
By Marquee Magazine on January 1, 2006 Features, Interviews, Molly Chappell 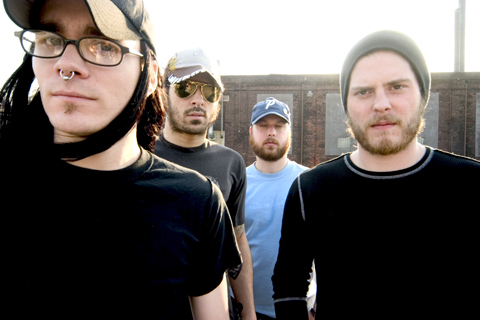 When most bands pack up to seek fame and fortune, they don’t bring thirteen of their friends to Denver. But Planes Mistaken For Stars aren’t like most bands.

The grassroots screamo band was voted the Best Underground Band in 2003 by a Denver Post readers poll. And that hype has seemed to follow them, as they continue to play Denver clubs, as well as touring, both nationally and internationally.

Between heavy riffs of intense hardcore sounds, the band finds pockets of calm that could be compared to their experience growing up in Peoria, Ill., only hours away from the intense city life of Chicago. It was this very atmosphere that fueled the raw, somber and fervent songs that Planes would ultimately become so well known for. With little more than dilapidated foundries and strip malls as its backdrop, lifelong friends Gared O’Donnell, Matt Bellinger, Mike Rickets and Aaron Wise plotted their escape from this run-down middle American suburbia.

Shortly after their debut release, a self-titled EP on Deep Elm Records, Wise was replaced by bassist Jamie Drier. With Drier in the line-up, the band released the EP Knife In The Marathon, the Fuck With Fire LP and the Spearheading The Sin Movement 7”/CD single. Also upon Drier’s entry into the band came a commitment to touring. Planes averaged over 100 shows per year from 1999 to 2003, playing in various venues worldwide.

When the band came to Colorado their last concern was “making it,” instead they were more concerned with making their music. They have never worried about playing bigger venues, they have been more concerned with whether or not the audience is having a good time.

“There’s not much we’ve intentionally done or not done. We haven’t jumped through hoops to have our band plastered everywhere. Any kudos are well deserved because we didn’t get acknowledgement by kissing the right asses; we’ve earned it,” Planes lead singer and guitarist Gared O’Donnell said in a recent interview with The Marquee.

One of the things that they’ve earned is a recent deal with Abacus Recordings and the group is planning their debut release for the label, Call A Priest, in summer 2006.

While the band is growing in stature, O’Donnell said that one of their main concerns is keeping centered mentally around their fans. “We have become more receptive to different opportunities,” O’Donnell said. “We are not as gun shy about success. At the same time, we need to know that if we are in a higher position we need to be respectful of our fans.”

While the band members are still young, several are also engrossed with family. O’Donnell was in fact pulled away from doing dishes and hanging out with his kid for this interview. But the family aspect does not keep the band from giving their all musically — they have played 215 shows since February 2004.

O’Donnell said that the music, in fact, helps keep the other elements of his life in check. “If we weren’t playing we wouldn’t be right and I would end up a bitter old fucker because I didn’t follow my calling,” he said.

The band has faced some big changes recently with their line-up. Matt Bellinger (guitarist) left the band and bassist Chuck French transitioned to guitar, while Neil Keener from Denver’s Red Cloud took over the bass position. O’Donnell said that despite the line-up changes the band has not skipped a beat. In fact, he said, “When Matt was leaving we were doing a lot of questioning. We asked ourselves, ‘Do we still want to be Planes?’  Planes is more Plans without someone who doesn’t want to be there 100 percent. Since we’ve been working with Neil (Keener), we feel more like Planes than we ever have.”

The same year that line-up change took place, O’Donnell, Bellinger, French, and Ricketts began the writing process for Up In Them Guts, which came out in July of 2004 on No Idea Records. With each past record being done hastily and on a minimal budget, the band wanted to take their time on what many suspect will be their definitive album. “Writing is always first and foremost a catharsis,” said O’Donnell. “And all we really want to be able to do is go on tour to play for the people we love, and the people who love us back.”

The changes, he said, have given another layer to the band, in fact. The old songs are entities themselves and their new songs will really show how the band’s overall sound has been affected.