Trending Stories from The Marquee
You are at:Home»Cover Story»Black Rebel Motorcycle Club restored to health with a Howl
By Marquee Magazine on February 1, 2006 Cover Story, Features, Interviews 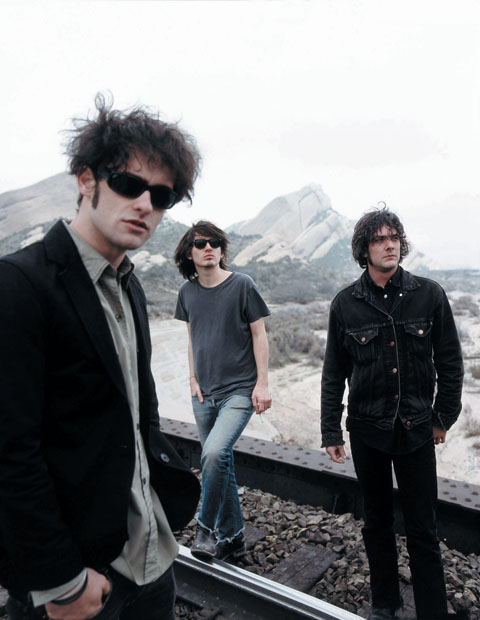 In August 2004, amid exhaustive touring and personal excess, the three founding members of Black Rebel Motorcycle Club took the stage in Edinburgh, Scotland and walked off as a twosome. Without drummer Nick Jago, the remaining members, guitarist Peter Hayes and bassist Robert Levon Been, holed up in a basement studio outside of Philadelphia and began creating what would be the Phoenix rising from the ashes.

Abandoning their fuzzed out clamor, Black Rebel Motorcycle Club went back to basics. “We changed out the sound. Some of our fans don’t recognize it. But in my mind this is the music that started rock and roll. We just picked all the pieces apart,” said Been in a recent interview with The Marquee.

In a sense, Howl was the crutch that kept the music going through a trying time for the band. “We split up as a band before the record happened and we used the record to keep ourselves going. Those are the reasons that we started in the first place. The album and the songs did help us a lot, it got us through a bad time,” said Been. “So it’s pretty special to me and I’m proud of the music. It means a little more.”

Some might argue that for these reasons, Howl is a very self-serving album. Been doesn’t deny that and admits that in making Howl there was no consideration of the audience. “I think it’s still important to make selfish music, in the best sense of the word. I feel that far too often people try too hard to cater to other people.”

This is an adage that many artists have touted over the years, including legends such as George Harrison, who claimed to never to listen the radio; Bob Dylan, who was publicly scorned for plugging in; and contemporaries like Wilco, who have shifted sounds countless times, alienating fans and record company executives in the process.

Been sees those examples as road maps to finding the music that he was truly destined to make. “[We] try not to cater. If you make music that you really believe in, then people will find it,” said Been.

However, Howl was not an album that happened at the spur of the moment as a reactionary piece. It is a pre-meditated collection of songs written over several years. “We’ve been writing these songs ever since we started,” said Been, explaining that the tracks on the album are what the band calls “back porch songs. Most of them were written on a deck or stoop somewhere. Anywhere there was some wood around. Enough wood to stomp your feet and keep the rhythm going.”

And as the band recorded the tracks, they kept not only the rhythm going, but re-found their band as well. Jago rejoined the band toward the end of the recording process and was able to get back behind the drum kit on the song “Promise.”

“The record was pretty much finished, but at least we were able to have him play on one of his favorite songs. It brought things full circle,” said Been, who said that before Jago’s break the band was spiraling out of control. “We were attacking each other, it was insane and nobody wanted to be there; too many drugs; too many things pulling us down. We just didn’t know how to say ‘no’ anymore. We were running on empty.”

That exhaustion pushed the band members, all in their own ways, to find a way to “burn it all down to build it up from scratch, to make it matter again. Some of the songs were written as a kind of musical exercise. With ‘Possible Son,’ I was listening to a lot of Sam Cook and Otis Redding at the time. I did want to try my hand at that. And the same way with ‘Promise.’ I always wanted to try and write something like that. It sounded simple but hard as hell to pull off,” said Been.

Been further explained that he feels that sort of work is a good challenge and it keeps a musician working hard.

“If we made another rock record, it would’ve been hard to find a new place to go because we’d thrown in the kitchen sink for our second album,” said Been. “This was the genuine challenge that we needed. I think that’s a big reason why the band had been deteriorating, ‘cause we weren’t pushing ourselves. We knew there was a lot more we were capable of.”

“When you listen to old records, from the Beach Boys to Beatles to Stones to Neil Young, it sounded like they were going by the seat of their pants a little bit,” said Hayes. “So that kinda became the guiding principle for this record. It really sounded like those groups were having fun, never knowing where they were gonna land.”

However, because of the drastic change from fuzzed out rock to a folkier Americana sound, many BRMC fans have been disappointed with Howl, but Been and the band see it differently. “I think it’s a pretty nice record and it just wants to get along with everyone,” said Been. “I consider it very friendly compared to some of our other records who tried to get people more pissed off,” However, angry fans don’t bother Been. “I’m all for it because it’s not gonna be for everyone,” he said. “I’d rather people have a feeling of good or bad as long as it’s a feeling. It’s inspiring.”

Howl may not really fit in with a lot of what’s on the musical forefront at the moment, but the band views that as a good thing — something that they can point to as part of the magic and originality of the release.

“I don’t think it sounds like the radio right now and it doesn’t sound like anything going on right now. And in that way people think it’s not interactive and doesn’t appeal,” said Been. “But if you don’t subscribe to that medium as the end-all be-all, then it’s one of the most universal records that we’ve ever done. And we wanted something that was gonna be an invitation to a lot more people than what we were expecting and it’s got a joyful spirit and comes with open arms.”

At the time of recording, BRMC was in between labels, which also seems to benefit Howl.  “As soon as music was made into an industry, it took on a slightly different form and everything has a cost,” said Been. However, he doesn’t let that sway him from his love. “Music can heal and can protect and inspire a great mass number of people. You’ve got fight for it and that’s all that matters.”

Having departed from Virgin, Hayes and Been paid for studio time out of their own pockets for Howl. But once Howl was completed, label suitors were soon lining up to bring the band on board.

Fittingly, the group elected to go with RCA’s Ashley Newton, the same A&R man who’d originally signed them to Virgin Records back in 1999. RCA/Victor — home to Blind Willie McTell, Jimmie Rodgers, Sam Cooke and Waylon Jennings, all in their own way influences on Howl — seems a perfect place for BRMC. The group also secured a deal with ECHO in Europe.

“We’re lucky little bastards, RCA in the States and the cool thing with the ECHO arrangement overseas is that we’re linking it up with our own imprint, Abstract Dragon,” Been said. “We’ve taken a goddamn beating for having a D.I.Y. ethic regarding our music the last few years, now it’s finally paying off.”

Ultimately, it has to be understood that BRMC is a band that believes in the rock and roll mythos — the saving grace, the excess, the exquisite burn, and all the rest of it. The experience of the past year — the highs and lows, the tumult and triumph — has only strengthened their understanding of the precious human alchemy that occurs among the great rock groups, that same unique power that exists between them.

“I guess there was this unspoken thing between us that was finally spoken,” said Hayes. “Sure, we questioned each other for a while. But the band is bigger than the three of us. From where I came from, and how the three of us ended up together, it just doesn’t … it just doesn’t happen like that very often. You don’t get the opportunity to grow up together in this way. That should be respected and it shouldn’t ever be thrown away. We had to dig pretty hard and deep to figure that out, but it was all worth the wait.”