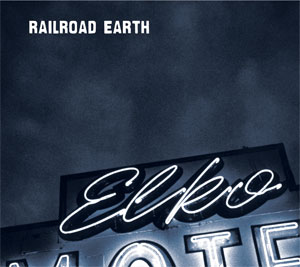 If there were any justice in the world, Railroad Earth would be at the top of the jam grass scene. But then again, if they were there, they probably wouldn’t like the title anyway.

Their new double live CD, Elko, released in late January, shows what their die-hard fans, and anyone lucky enough to have caught one of their countless shows, already knows — that the band’s impeccable musicianship, coupled with the brute strength of songs penned by frontman Todd Sheaffer, is a phenomenal combination to which few bands can even come close.

Elko was recorded during Railroad Earth’s 2005 spring tour and captures the band’s live performances flawlessly, but the CD also shows why Railroad Earth has garnered such a loyal and devoted fan base since its inception in 2001. The reason is simple. While the band can easily be pigeon-holed into the aforementioned jam grass scene, Railroad Earth touches on so many musical idioms and fits them together so seamlessly that it never comes across as self-indulgent, as is the case with so many other bands these days.

Over a six-month formative period, the band worked on some original songs as well as playing covers that they thought would be fun to play at shows. Railroad Earth then entered the studio to lay down five songs for a demo. Within a week they had a manager on board and they still didn’t even have a press photo when they landed a slot at the prestigious Telluride Bluegrass Festival. It was their tenth gig.

The band recorded another five songs, combined them with their demo tracks and released their debut album The Black Bear Sessions.

Since then, they have released two more studio albums on the largely bluegrass imprint Sugar Hill Records (2002’s Bird in a House and 2004’s The Good Life). They have also toured almost constantly, honing their sound as a live act.

Mandolin player John Skehan admitted that Railroad Earth has improvisational tendencies, but he said that the band is careful to only use improv as an accent to the music, and not let it rule their songs or their shows. “Our M.O. has always been that we can improvise all day long, but we only do it in service to the song. There are a lot of songs that when we play them live, we adhere to arrangements from the record. And other songs, in the nature and the spirit of the song, everyone knows we can kind of take flight on them,” said Skehan.

And when the band does take flight, it’s something that gets noticed. In fact, Grateful Dead bassist Phil Lesh has not only asked some of the members of Railroad Earth to be “Friends” in his Phil & Friends band, he has also learned to play some of Railroad Earth’s repertoire.

It’s not that Railroad Earth sits atop the same high horse that nearly every jam band has these days, which claims “We’re not a jam band but we do jam.” But, in this case, lumping them into such a categorization does not fit, despite the fact that every song on Elko clocks in at over six minutes with some reaching more than 15 minutes. And, likewise, the band plays a lot of bluegrass, but can’t really be lumped in there because they do so with drums (a taboo in bluegrass).

The band members don’t know what the hell to call it either, but they do have some ideas.

“I always describe it as a string band, but an amplified string band with drums,” said Skehan. Violinist/vocalist Tim Carbone calls Railroad Earth a “Country & Eastern” band, owning to the band’s birth in a beautifully rural area of upstate New Jersey.

However the hell they’re classified, they should still be filed under ‘A’ for “awesome,” and Elko should be filed close by under ‘AL’ for “awesome live.”

Charlie Hunter has come back to the faithful trio to produce a new album Copperopolis. From solo to duo, quartet, quintet and finally back to trio, Charlie Hunter keeps on rocking that 8-string guitar. While Hunter was playing with other projects (most recently including Garage-A-Trois and Groundruther), he has once again found himself going back to where it all began with the trio. The addition of John Ellis playing both the Wurlitzer and melodica opened up a lot of time for Hunter to do what he does best, and that is to simply shred. Copperopolis sends the band in a different direction than their previous release Friends Seen and Unseen, this time the trio rocking the whole way through. With its jazzy rock feel, this is the album fans have been calling for for years.

David Boylan’s latest release Slave is a diverse and vibrant work for those who are too old to be young and too young to be old.

This ten-track collection combines the liberties of full-fledged rock and roll abandon with the wry musings and grainy soundscapes of the more traditional singer-songwriter.

Boylan began his musical career in 1988, co-founding the rock group The Feds. He made the decision to go solo in 1997. Slave, his sophomore album, is nostalgic of his younger rock and roll years, but this time it’s more than sex, drugs and rock and roll. Boylan is sure to include his life experiences in some telling acoustic ballads and fills in the space between his words of wisdom with punchy rhythm and strong hooks.

Beto Hale’s upcoming album American Mythology is a musical extension of his multi-cultural background, including introspective ballads and political anthems. The Latin-American artist combines the sweet sounds of a Spanish serenade with the vibrant stylings of American rock.

After receiving his education from the Berklee College of Music in Boston, Hale became the editor-in-chief of Boulder-based Musico Pro magazine, but this sense of security was not for him and he quit to pursue his melody-making dreams. Beto Hale is an exciting bilingual musical force to be reckoned with.

From the political “Guns or Butter” to the environmental “Poison Oak,” Hot Buttered Rum voice their sweet-sounding opinions over their polished musicianship. The band called on their friend Peter Rowan to open the album with “Firefly” and ended it smoothly with the help of Darol Anger and Mike Marshall on “Wedding Day.”

Some by Sea’s Side Cho release an indie pleasure

Some By Sea’s latest album On fire! (igloo) is a collection of tracks reminiscent of indie/emo rock that is worthy of “The O.C.”

After having self-released their debut album, they were picked up by Side Cho Records to put out their sophomore release for the pleasure of all fans indie.

Some By Sea began as a one-man side project and evolved into a quintet. Rachel Bowman on cello and piano adds an innovative twist, mixing in orchestral instrumentals with the emotionally charged lyrics and indie rock rhythms. This is an album for the emo rockers.

Syd Barrett is a man whose mythology will always overshadow or at least heavily cloak his musicianship.

While his former bandmates in Pink Floyd have become global superstars, Barrett remains an enigma and a complete recluse. But it was Barrett who originally formed the band, immediately becoming its chief songwriter and lead guitarist, as well as the driving force behind much of the material on the band’s famed album Piper at the Gates of Dawn.

Under Review paints a glorious picture of the singer and songwriter as founder of one of the ’60’s pinnacle psychedelic acts, but the DVD also reveals insights into Barrett’s battle with mental illness.

Barrett has long been labeled as one of the great acid casualties of the ’60s, with rumors of a severe breakdown due to his use of LSD. (My favorite rumor is the one that he was so disturbed that he had to be placed in a mental hospital, complete with straight jacket, after trying to peel himself like an orange.)

But Under Review reveals a different side of the story, with biographers and close friends saying that it was mental illness, in and of itself, that led to Barrett’s mental decline, odd song structure and eventual departure from Pink Floyd in 1968.

The DVD  follows Barrett from his creative prime, with Piper material such as “Arnold Layne,” “See Emily Play,” “Bike” and “Interstellar Overdrive,” through embarrassing moments like the Spinal Tap-esque “Apples and Oranges,” and concludes with an overview of Barrett’s obscure solo work, produced by former bandmate Roger Waters and his Floyd replacement, David Gilmour.

All in all, Under Review is best viewed as documentary of Pink Floyd’s earliest recordings and a snapshot of what could have been, had Barrett stayed around long enough to see it all materialize.