Trending Stories from The Marquee
You are at:Home»Features»Galactic weathers Katrina’s wrath, gets land legs back after Jam Cruise
By Marquee Magazine on February 1, 2006 Features, Interviews, Karen Maye 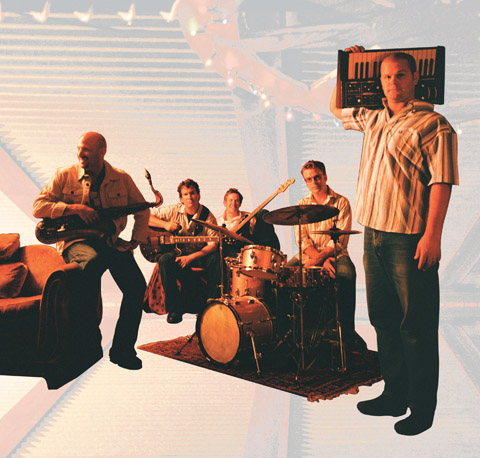 New Orleans-based Galactic has been through some turbulent times lately, but that won’t stop the party band from doing what they do best — funking all night.  With what seems to be a special affinity for the late-night shows, Galactic is one of those great bands that can, and often does, play until the sun comes up.

Recently wrapping up another stint on Jam Cruise, The Marquee caught up with guitarist Jeff Raines as he and his bandmates worked to get their land legs back.

“The Jam Cruise people … every year they have progressively gotten the whole thing more and more organized. It’s always good fun. It’s kind of nice for us to do something different for a week a year. I think Jam Cruise is really fun for the fans because there’s no backstage, everyone is just kind of hanging out,” Raines said. And hanging out and partying is one of Galactic’s fortes.

“I think it benefits the bands as well. You end up meeting a lot of people who have been coming to see your shows for years and have never met you. The people are very respectful, and on that level I think it’s a really cool event,” Raines said.

Yet as nature has shown everyone, all the fun and partying in the world could not stop the fury and flood waters of Hurricane Katrina. Like many others in New Orleans, the band was hit hard by the storm. “We were definitely relatively lucky as a band. I mean, it’s hard to say you’re lucky, living in New Orleans these days. Richard (Vogel) our keyboard player’s house flooded, so he lost everything he owned. Ben Ellman, our saxophone player, moved — he needed a new roof on his house so he moved to New York, but besides him we’ve all stayed,” Raines said.

And Raines said that the band is determined to stay in New Orleans and re-build the city, and their lives. “We love the city, and we are going to help in rebuilding for however long that takes.  This is not the kind of thing that’s going to change anytime soon. New Orleans can be such a refreshing place to live, pre-Katrina, but now, you really learn to appreciate what you’ve got after something like this happens,” Raines said.

Galactic built themselves their very own studio a few years back, a studio that is now condemned after the building next door collapsed. Pre-Katrina the band was also working on a new album, a project which has now been set back months. “We’re all here, trying to make it work, and it’s going really slowly, but little teeny things happen every day. In my neighborhood I can drive around for a few blocks and not even know that it happened, but then there will be a destroyed building. We are in the process of searching for another studio here in New Orleans. It’s kind of a bummer,” Raines said.

Another big change for the band was the departure of vocalist Theryl “Houseman” DeClouet in 2004, a move which redefined the band as an instrumental act.

“When we parted ways with our singer, it felt like the right thing to do at the time. I think we have been having more fun with the projects just seeing what happens in this environment,” Raines said. While the band has had guest vocalists sit in on certain performances, they are not actively looking for another lead singer. As for the fans, the band said that it has had no complaints.

“I like to think that our music comes from an honest place. It’s not like we are this music industry-created band of people that was put together to make money for some record label. We are real musicians playing real music, and we’re not trying to get on the radio and be pop stars, we are trying to make a living actually playing gigs. I think there is a certain honesty in that, and that maybe translates to people’s experience seeing us,” Raines said.

That honesty, from both the band and the fans, is valued within the jam band music scene, the scene that has embraced Galactic with open arms. “I think as a music scene, the whole jam band scene is pretty cool.” Raines said. “Generally the fans are very into seeing live music, and not all about watching MTV and hearing pop radio, which I think is great. I always thought the jam band scene was descendants of the Grateful Dead, and our band has nothing to do whatsoever with the Grateful Dead. No one in our band was ever really influenced by that band, I don’t think our music really is, so I found it kind of surprising that the scene embraced what we were doing, and it felt very fortunate, really.”

Galactic started some 10-odd years ago with the relocation of two former punks from Washington D.C. Guitarist Jeff Raines and bassist Robert Mercurio decided they needed some schooling, New Orleans style. While Mercurio attended Loyola, Raines attended Tulane. Both got their degrees, but got a much more important education from the bars and shows of the Crescent City. Inspired by the music of Dr. John, The Meters, Professor Longhair and The Neville Brothers, to name a few, the two got their degrees in funkology as well.

The pair swiftly met up with the other members of Galactic (Ben Ellman on harmonica, tenor and baritone sax, Stanton Moore on drums and Richard Vogel on keys) through the New Orleans music scene, and the band started out mainly as a Meters cover band. After a while they decided they needed to play their own music, and Galactic was born. “In the end, we’re a funk band and we play funk music and we try to make it fun for people to come and see our shows, to dance and maybe forget some of their daily grind and have a good time for a few hours,” Raines said.

Currently the band is busy with their new Coup de Gras Tour, inspired by the New Orleans annual celebration of Mardi Gras. The tour began in Tempe, AZ. and wraps up in New Orleans on Mardi Gras weekend with two nights at Tipitina’s.

“I think there is a national interest now more so than ever before in all things New Orleans,” Raines said.