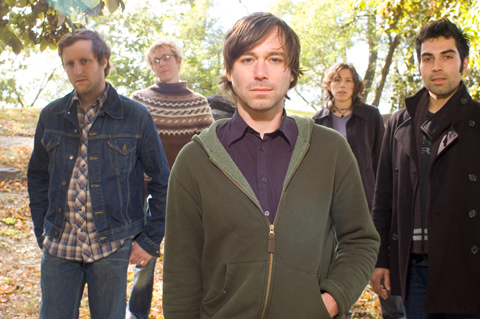 matt pond PA isn’t a place in Pennsylvania, but that doesn’t mean it isn’t something that’s being put on the map.

matt pond PA is, in fact, a “chamber pop” band that has gotten placed in the atlases of the world by creating music that is delicately layered, with a persistent beat that keeps it from becoming another depressing melody.

Several Arrows Later is the sixth full-length album by the band, but to Matt Pond, the man, it is the most successful. “I like our other albums, but I like this one more because I am more in tune with it right now. I am probably most in tune with what I am writing right now. If each album wasn’t better than the last one I probably wouldn’t put it out,” said Pond in a recent interview with The Marquee.

Matt Pond, the man, grew up in New Hampshire, but matt pond PA, the band, was formed in Philadelphia, where pond lived in the late 1990s.

matt pond PA recorded several albums and EPs during Pond’s Philadelphia tenure, enjoying brief stints on labels File 13 and Polyvinyl. During this period band members came and went, making matt pond PA more of a revolving cast than a permanent company. In 2003 Pond moved to Brooklyn, where he met the people that would finally root the band in friendship and fidelity: Brian Pearl (guitars/piano), Dan Crowell (drums) and Daniel Mitha (bass). The following year, matt pond PA released Emblems (Altitude). People took notice, the critics liked it and a couple of songs even showed up on “The O.C.”

Pond wrote the bulk of Several Arrows Later during the time he was settling into New York, running away to New Hampshire to escape his claustrophobia and touring in his big white van. It is an autobiographical album full of anxiety and nostalgia, longing and fulfillment. “Philly wasn’t good for me … there were mutual dislikes,” Pond said of his initial move away from the City of Brotherly Love.

Now that he’s officially a New Yorker, he said that ‘The City’ is a nurturing environment for his band and for his music as an art form. “In this city people are in bands and go to see other bands. It is exciting to have my heroes and idols come to see us. That is the greatest thing ever — when musicians you respect come to see you. I moved to New York with the intention of being ambitious. It’s hard to do that in other places without undermining yourself … It is easier to be in New York because you are not humiliated by your passion,” said Pond.

All of that being said, Pond still looks back with fondness on his days in the sparsely populated corner of New England. “I lived in New Hampshire until I was 18,” he said. “It is a lot quieter. I never realized what a spastic person I was until I moved. In New York you are getting touched by hundreds of people every time you are on a subway, but people are trying to do something here and living here is hard. “

Hard living, however, has given way to good payoffs for the band, even though, in Pond’s eyes, the  triumphs have not taken away from his goal of making music that comes from the heart. matt pond PA has two songs on “The O.C.” soundtrack and has appeared on “Conan O’Brien.” “I don’t think anything has made us change according to what’s happened. If anything I have gotten less conscious. When I was on TV I was not self-conscious at all. We don’t write songs with the intention of being on ‘The O.C.,’” he said.

While he may not be self conscious, Pond still has self doubts about his music “I sometimes wonder if I have a terminal disease and people are encouraging me to make me feel okay,” he said. “I am always being interpreted by other people.  Some have gone as far as trashing me. It’s hard not to listen. Other times they will make up the most brilliant things and say I said them.”