Trending Stories from The Marquee
You are at:Home»Features»Outformation puts a contemporary twist on the Southern Rock Genre
By Marquee Magazine on February 1, 2006 Features, Interviews, Lisa Oshlo 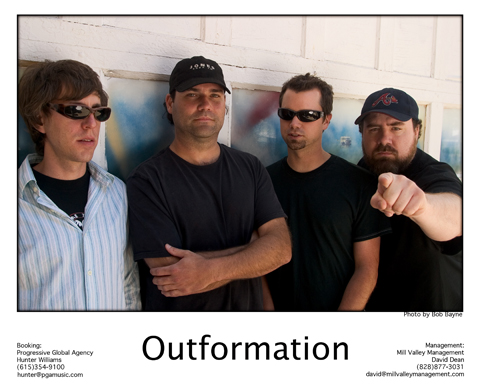 For guitarist Sam Holt, Outformation was a band many years in the making.  Holt and bass player Grady Upchurch played together in high school bands before both relocated to Atlanta, Ga., where Holt landed his job as guitar tech for Michael Houser and Widespread Panic.

While working in that capacity, Holt continued to play with Upchurch on the side until Houser’s death in 2002 prompted him to pay more attention to his own musical dreams.

Currently at work with Widespread Panic in the Bahamas, Holt spoke with The Marquee about the evolution of his band.

“[Houser] was always a real supporter of mine,” said Holt. “He would listen to me playing his guitar and tell me I should be playing music. When he got sick, things started to get more real, and I figured that if he believes in me, and [the other band members]believe in me, then there’s no reason not to do this.”

Holt and Upchurch recruited New Orleans drummer Lee Schwartz through mutual friends and Outformation became a full-fledged band after Houser’s untimely death from pancreatic cancer. With Schwartz rounding out the trio, Holt felt this band “could really be something.”

Outformation’s first studio effort, 2005’s Tennessee Before Daylight (produced by longtime friend and Panic keyboardist John “JoJo” Hermann), was released amidst much industry buzz, including a nomination for Album of the Year from Honest Tune Magazine. Holt describes the album as “definitely a song-oriented album, rather than a jam album, although we do jam live.  It’s song-oriented rock with a southern feel,” he said.

It’s no wonder Holt is hard pressed to describe the band’s sound, which is  influenced by artists ranging from Black Sabbath to Bill Withers to Willie Nelson to the Grateful Dead and, of course, Widespread Panic.

“For so long it’s been Lynyrd Skynyrd and the Allman Brothers that were thought of as Southern Rock, but I think it’s mutated,” said Holt. “That’s still where Southern Rock came from, but now it’s definitely something that’s more the feeling of southern rock.”

Holt describes his guitar style as “pretty heavy at times, with a lot of distortion, but there’s also a lot of country in it. Well, before country got too cheesed out. I play with my thumb instead of a pick,” he continued, “and that’s a pretty distinct sound. I borrow a lot from Toy Caldwell of the Marshall Tucker Band.”

While it is decidedly exciting that Outformation has appeared so forcefully on the scene, it has become increasingly difficult for Holt to wear both of his hats as Outformation frontman and Widespread Panic employee. “It’s definitely a give and take,” he said. “The exposure helps us grow — occasionally we play after Panic shows — but then we can only tour when Panic’s not touring.  Right now it’s a pretty good thing for us. I don’t know how much longer I can keep doing both, but we’re gonna find out.”

“Teching is a job — which I do love,” said Holt. “But with guitar playing, all the emotions that you have can come out. Playing guitar is expressing how you feel. It took me a while to be able to play like that.”

In addition to the original trio, Outformation has picked up some additional players for their current tour: Denver’s own C.R. Gruver (Polytoxic) joins on keys, Clarke Keown on guitar, and Jeff “Birddog” Lane on percussion.