Trending Stories from The Marquee
You are at:Home»Features»Th’ Legendary Shack Shakers caravan into town with Reverend Horton Heat
By Marquee Magazine on February 1, 2006 Features, Interviews 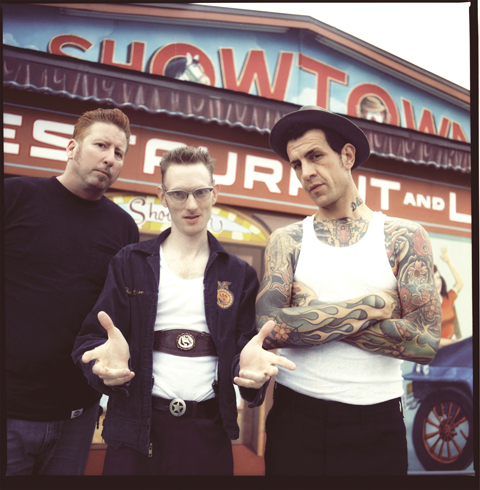 Col. J.D. Wilkes works crowds like an iconic soothsayer, whipping them into a frenzy with hypnotic hymnals of psychedelic psychobilly. He is the preacher at a pulpit, the carnival sharpie, the vaudevillian expressionist, the village idiot, the court jester and the dynamic auctioneer all wrapped in one. In short, as the front man of Th’ Legendary Shack Shakers, there are very few things that the Colonel isn’t.

“We throw everything at them but the kitchen sink,” Wilkes said of Shack Shakers’ shows. Anything and everything for the sake of entertainment, for showmanship, for the carnival. “We’re not up there trying to be respective to the clergy. We don’t play the tortured artist [because it comes down to]are you there for the crowd or are you there for yourself?”

The Colonel values above all else the performance. Even it if means assured sacrifices and risks. “[Performance art] desires a certain amount of self-deprecation,” Wilkes said. “Like Conan O’Brien. He plays the fool every night. But he plays the wise fool. These people know how to move an audience. They use humor to endear themselves to the audience. That’s what I love about Howlin’ Wolf and Jello Biafra.”

Col. J.D. Wilkes has learned the qualities of being a front man in the more than five years he and Th’ Legendary Shack Shakers have been together. Wilkes, given the honorary military title of colonel by the governor of Kentucky, earned that title for the same reason: he is a leader. Col. Wilkes epitomizes the front man and leadership role like that of some of the most quintessential front men in history, many of which Wilkes has studied and admires. He appreciates the way an individual can sway a crowd, penetrating the complacency of an audience like a preacher at church.

“I watch the televangelist channel. Not a lot, but once in awhile. But it was Howlin’ Wolf. He is a real showman. He wasn’t just a force of nature; he was also a trickster, a humorous jokester. He wasn’t afraid to play the fool. It’s a return to charisma. A turn away from self importance,” Wilkes said.

It’s this vulnerability that endears himself to crowds and as a result, Wilkes can never let his guard down, even for a second. He has to front the show, captivate an audience, ring in the sideshow suckers, bamboozle the clem. Metaphorically speaking, he is a man of various disguises and he wears many hats.

Wilkes, with Mark Robertson on upright bass and David Lee on guitar, needs no advance man when they roll into town with a blues harp, the jawbone of an ass, a vibraslap, glockenspiel, a washboard and a handful of “penta-caustic” musical tongue-in-cheek sermons for the crowd.

“We try to go from performance artists to recording artists, and the way we go about that is to try to capture more eccentricities of sound and channel them into a musical direction; an auditory or sonic experience: tractor sounds, motors,  fan belts, weird samples of auctioneers,” said Wilkes. “[We try to create] the same aesthetic perception in the minds of a live audience and in the studio. It all helps to reinforce the mental image.”

Hank III’s a big fan. Robert Plant requested them to open shows on his European tour. Reverend Horton Heat habitually pulls them on the road with him, and Dead Kennedys’ Jello Biafra has called Col. J.D “the last great rock and roll front man.”

Th’ Legendary Shack Shakers released their debut Cock-a-Doodle-Don’t in 2003. Their latest disc Pandelirium, a February 2006 release (on Yeproc), according to Wilkes, has got that same carnival sideshow feeling to it. “A Southern gothic carnival theme. A different type of a big top thing. Different from our last one, which had a religious theme [2004’s Believe].”

These observations often trickle into the content of Wilkes’ songs. “I write about things around me that fascinate me. But I don’t do it from a point of view that is condescending or ironic … That’s the difference between the Shack Shakers and other country,” he surmises. “We’re not trying to be ironic or coffee shop cowboys…with all hat and no herd.”