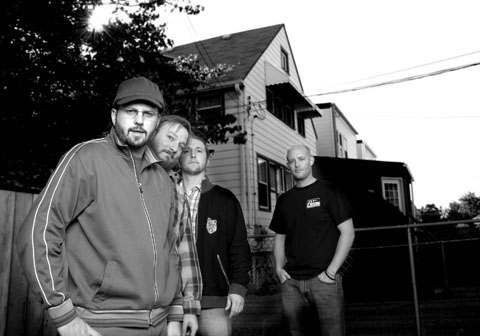 Now known as the #1 “Road Warriors” for 2005 on JamBase, the high-powered acoustic funk band 56 Hope Road has double-clutched its touring vehicle and pointed the grille in the direction of another title for 2006.

“We didn’t expect to win, but we’re ecstatic because we’re proud of that honor,” said Steve Goveia, vocals and acoustic guitar, in a recent interview with The Marquee.

56 Hope Road played a total of 219 shows in 2005, surpassing approximately 12,000 bands registered on JamBase. “We wanted to play that many shows, and we’re happy that we were recognized by JamBase,” the band said in a release following the announcement.

Most bands at the level of 56 Hope Road have a 15-passenger van that everyone squishes into, but since the band is on the road so much, they pooled their money together and purchased an RV. The extra space helped the band as a whole.

“It’s nice being able to sleep, go and hang out in the RV and not sit in the club,” he said, “which can get old very quickly.”

One routine guaranteed not to become mundane for 56 Hope Road is playing their music. Funk is known for its improvisation on stage during shows, and Goveia explained how his band stays on track while keeping each performance unique.

“Our improv goes on in areas of songs where we can stretch out, but it never really goes off into space like a true jam band would. Our style comes from being comfortable with each other on stage and trusting everyone up there with you,” Goveia said.

Their love for funk music started in their younger years, with dance beats speaking to them instead of heavy metal riffs or country twangs.

“We’re all from that hip-hop era, growing up in the ’80s,” he said. “You can’t resist feeling and moving to the music. It puts a smile on people’s faces as well as mine and ours.”

Goveia and Dave Hamilton, vocals and guitar, draw inspiration from “good things” in their lives, as well as struggles, for their songwriting. When writing songs, they use abstract thought and force listeners to interpret the songs, compared to artists putting the lyrics on a silver platter and serving it to the audience.

“Like poetry, the idea of abstract writing uses our words and life experiences with a twist so it could be anybody’s situation,” said Goveia. “I don’t like it when people straight up and tell you the story. I like to make people think and wonder what we’re talking about.”

With three albums already notched on their belt (Once in Our Lives, live 2005, Drop It All, 2004 and All Points Connect, 2002), 56 Hope Road will add another to their resume by going back to the studio in May. They will continue to play live in 2006, since putting on credible shows are more important to the band than an acclaimed studio album.

“Industry people could say you have a great album, but they don’t really care unless you’re putting butts in seats,” said Goveia. “It’s still up there, don’t get me wrong, but if we played a huge show for 20,000, that would be way good.”

56 Hope Road MMW Once in Our Lives Steve Goveia
Cool, Share this article: Twitter Facebook Google+ Pinterest LinkedIn Tumblr Email
Previous ArticleThrice keeps its image while redefining their sound with release of Vheissu
Next Article Band of Horses set to release its sub-pop debut everything all the time