Trending Stories from The Marquee
You are at:Home»Features»Ben Taylor’s Another Run Around the Sun highlights his artistic growth
By Marquee Magazine on March 1, 2006 Features, Interviews 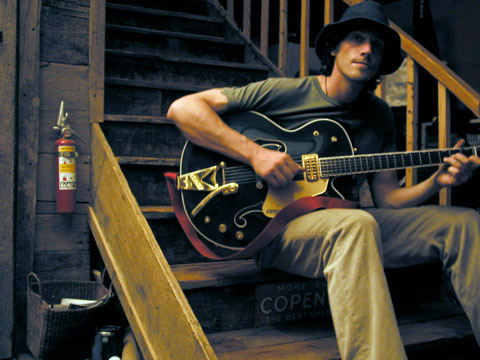 For as long as there have been rock and roll celebrities, there’s been endless attention paid to their children. The sons and daughters of our favorite musical monarchies end up monopolizing the cover of US Weekly, marrying Michael Jackson, or attempting to spill out witty commentary on endless VH1 specials. You’ve seen it and that’s just the way it is. Or is it?

Ben Taylor (as in James Taylor) settled into a house on Martha’s Vineyard with his flower garden, his girlfriend and a couple of small dogs and has achieved a major milestone in his trek towards a career that promises to be as timeless as the greats that raised him.

Taylor’s upbringing was far from typical. His parents, Carly Simon and James Taylor, settled on separate sides of the musical spectrum; James Taylor locked himself in rooms for months before he unveiled his work to his family, while Simon would wake an entire house to hear her rough mixes before they were perfect.

Taylor toured with his father and watched him perform from the side of the stage. By high school, Taylor taught himself to play guitar and grew up playing his father’s music. His father influenced him the most musically, he said, while his mother, who he calls a great songwriter, had a very different role in his musical growth. “She wrote me a manual with all sorts of suggestions on how to write songs — it was great, it gave me an extra boost of confidence and ideas,” Taylor recently said in a trans-Atlantic interview with The Marquee.

Taylor’s unique home life was coupled with a distinctive adolescence. After attending several private schools in Manhattan, Taylor replaced four years of stuffy classrooms with a series of trips to the Colorado River, the Grand Canyon and a farm in New Mexico. After each trip, Taylor would write essays about his experiences and receive high school credit for them. This “cool way to get an education” led Taylor to believe, at least for a short time, that he would become a farmer.

Eventually, Taylor teetered on the edge of a decision; would he step into his hereditary spotlight or would he work the land in the sunlight?

By the age of 20, Taylor chose the spotlight. After he recorded a cover of The Beatles’ “I Will” for the Bye Bye, Love soundtrack and recorded an album for Epic Records, he was left disenchanted by the industry and by his insecurities.

After returning from a trip to the Caribbean that replenished his creative edge, Taylor met drummer Larry Ciancia (Fiona Apple, Everlast) in Los Angeles and launched the Ben Taylor Band. Finally, Taylor banished his insecurities and became the confident artist he is today; “I think that’s something that flows in and out of reality – you’re comfort with yourself,” said the surprisingly humble Taylor. “On a good day you’re completely comfortable with yourself and maybe usually you are, but with performance it helps to be that way all the time.”

His newest album, Another Run Around The Sun, stands as a highlight in Taylor’s growth. The album illuminates his confidence and complexities while remaining sincere and exposed. Taylor paints layers of genuine acoustics on top of earthy jazz and elegant lyrics.

Another Run was recorded in London with the help of Kevin Bacon and Jonathan Quarmby. “Those guys are fantastic,” Taylor said. “Kevin has a great ear and Jonathan has great hair.”

Taylor worked with Bacon and Quarmby on his first album, Green Dragon, Name a Fox (Sony Work Group), in 2002. Taylor, who was trying to do something different from anything before, felt he could have done better and later took off to Evergreen, Colo. to record his second album, Famous Among The Barns, on his own Iris label.

Every element of the newest album is pure Taylor and whether he grew into his own style or the London air was particularly invigorating, Another Run is his best album to date. Some of the album’s songs are fleeting stories, while other songs reflect Taylor’s relationships and experiences. “‘Digest’ is the one I connect with the most. That one’s about a friend of mine who’s in jail for the next ten years on top of the five he’s already been there for,” said Taylor of the melancholy picking and carefully harmonized vocals. The album’s undeniably sexy track, “You Must Have Fallen,” is a heartbeat short of a dusty romance, while “Nothing I Can Do” echoes Taylor’s father.

Taylor is touring before he gets back into the studio and will hit up Colorado early this month. Tristan Prettyman, who Taylor calls a beautiful girl with a beautiful voice, will open for him throughout the entire tour.

As Taylor soars past his newly placed milestone, he stays grounded and lighthearted. “I am a small dog in a big man’s body,” he said to The Marquee, “Small dogs pretty much say it all.”