Trending Stories from The Marquee
You are at:Home»Features»The Strokes tweak their sound with latest, First Impressions of Earth
By Marquee Magazine on March 1, 2006 Features, Interviews 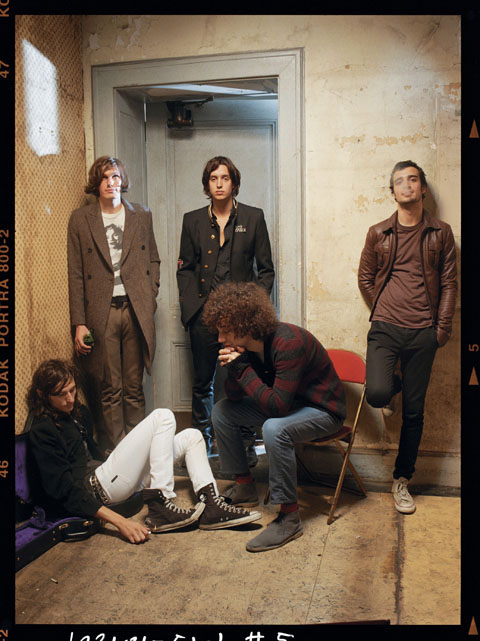 The Strokes is a band that was born with a silver spoon, but has cast the silver away in search of its own fate and musical sojourn.

The five members came from what are considered upper-class families (for example, lead singer Julian Casablancas’ father John founded Elite, one of the world’s largest modeling agencies) and met while attending expensive private or boarding schools in both Manhattan and Switzerland. They hardly seem like the type of young men who would yearn to don tight pants and pen catchy yet slightly anti-social and world-weary tunes.

So, how did one of the hottest modern rock acts of the past decade — a band that critics have hailed as the resurgence of raw, garage-style rock and roll, a band that single-handedly sparked a new wave of bands whose names start with “the,” and made greasy hair hip (again) — manifest itself from such a seemingly very un-rock and roll background? Well, there was the drinking.

Much of the attitude that oozes off the band’s three albums to date comes from the lyrics penned by Casablancas, which feature topics such as women, drinking, parties, and the fake and vapid nature of some people, especially those unscrupulous socialites that can often be found hanging around popular bands. But now that they’re sober(er) and settled down with wives and girlfriends, The Strokes continue to show their dedication to making their brand of hip, pop rock on their latest album, First Impressions of Earth, released in January on RCA.

The band, which includes guitarists Nick Valensi and Albert Hammond, Jr., bassist Nikolai Fraiture and drummer Fabrizio Moretti, might have eased up a bit on the partying, but it doesn’t seem to have dulled their edge at all. Moretti, in a recent interview with The Marquee, talked about their past success and future plans.

“I love the U.K. crowd. They’re a blast,” came Moretti’s voice over the phone, with only a one or two second delay. The band was in England at the time of the interview, in the middle of a sold-out tour of the U.K. The U.S. tour starts this month.

Moretti told The Marquee about the early days of the band and their rocketship ride from playing bars in New York to a platinum selling debut record, 2001’s Is This It. “We were all in college, around the year 2000. We started playing shows around New York, recording demos to try to get as many shows as we could possibly get. Our demo got sent to England, and Jeff Travis from Rough Trade heard it and said he wanted to sign us. So, after playing for a while around the city, we went to England and had a little first tour there. Then everything kind of grew exponentially from there,” he said, laughing.

Sounds simple. But in reality the band had already logged many hours playing clubs on New York’s Lower East Side before attracting the notice of Ryan Gentles, the booking agent for the trendy Mercury Lounge. Soon the band was a fixture there, and Gentles believed in them so much that he eventually quit his job to become the band’s manager full-time. “I made it sound like it happened right away. We’d been playing in New York for a long, long time before we sent the demo off to England,” admitted Moretti.

The band’s experience getting a U.S. distribution deal after getting signed to Rough Trade was also very different from that of most bands. “After we got picked up by Rough Trade in England and started playing some shows, U.S. labels kind of took interest, I guess, and we met with a bunch of labels that wanted to sign us,” said Moretti.

The latest album was recorded at The Strokes’ new private studio in Manhattan. “We’ve had this rehearsal space in the [world-renowned] Music Building in New York; it’s in Hell’s Kitchen. A bunch of unsigned bands go there to rehearse because you get to share studios with a bunch of other bands. You see, if you’re growing up in New York, you don’t really have a place to play. You don’t have a garage to set up,” said Morretti. “So we kept going to this building and it kind of became our home. We just recently got a recording studio of our own going there in the Music Building. We decided to buy some recording equipment and just make our rehearsal space our recording space as well.”

They also tried a new producer this time around, who came on Hammond’s recommendation. “Albert was working with his friend on some music at a different studio and he met David Kahne, who was producing his friend’s stuff, and realized shortly after that this guy really knew what he was talking about,” said Morretti. “So he invited him over to our studio to help us out, because we wanted to change our sound a little bit. He just really knew what the hell he was talking about. He really is an encyclopedia of music knowledge. So we stuck with him.”

The changing of their sound also came with a visual change as well. The band had been fortunate enough early on to be befriended by Roman Coppola, son of the renowned director Francis Ford Coppola (The Godfather). Though the band had always admired the work the junior Coppola had done for them, for the new video they switched it up in an attempt to show another side.

Their most recent video, “Heart in a Cage” was directed by Samuel Bayer and the video for the first single, “Juicebox,” was directed by Michael Palmieri, although the director had his name removed from the project after MTV heavily censored the version that aired. The “Heart in a Cage” video was an especially exciting shoot for the band, during which some members briefly feared for their lives. “It’s going to be a pretty cool video, I believe, from what I’ve seen so far,” said Moretti. “We were all outside and Nick and Albert were playing their guitars on the ledge of a building. They were actually on the ledge without a harness, like 50 stories up in Manhattan. When we were watching the video back again, Albert said ‘I don’t know how I did that. It makes me scared just watching.’”

In addition to their daredevilish video shoots, the band has been writing and recording new material, a process that has recently, with the new album, become more collective. “You’ve caught us at a kind of transitional phase in our professional life, where things seem to be a little bit different from how it was in the beginning. In the beginning, it was like, Julian would bring in his song and we would all put in our parts and try to arrange it together. But lately, I feel like more people are putting their two cents in. It’s getting pretty cool,” Morretti said.

That being said, however, Moretti explained that the group won’t be hitting the studio anytime soon. “We’re already thinking of new music to put down. But we’re in kind of the touring mind-frame right now, just to promote this record, so there’s not really any concrete ideas for the future except possible future show dates, and how we’re going to wrap the tour. That and we’re pretending like we’re working on new music, to keep us sane,” Moretti joked.