Trending Stories from The Marquee
You are at:Home»Features»Austin outdoes itself again for annual music retreat
By Marquee Magazine on April 1, 2006 Features, Festival Coverage, Jeffrey V. Smith 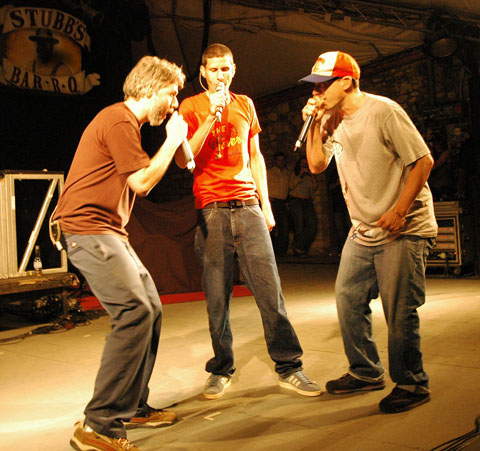 A proper review of South By Southwest, the music industry’s annual Spring Break love-fest in Austin, is impossible. There is simply no way to properly expound on the multitude of facets that together make up the lunacy that is SXSW. Thousands of bands and fans from around the globe all come together with, managers, publicists, journalists, label execs, venue owners, radio programmers, booking agents—and any other profession with a vague relevance to the music industry—creating a 24/7 music scene that is too big for anyone’s plate, let alone words.

Amidst the hundreds of showcases in as many different venues and genres; the industry parties with their own line-up of bands; the concurrent music trade show and conference featuring musician interviews, panels and performances; unofficial events too numerous to count hyping still more acts and the random street performances there is no way any two people will experience the event the same way. Generalizations, highlights and some of the buzz generated can, however, be conveyed and hopefully open a few minds to what’s coming down the ’pike; at least until the independent music stew is stirred up again at SXSW ’07.

Perhaps the biggest lesson of Austin in March is that there is always something different and unexpected around each and every corner. No matter where you’re at with your musical choices and tastes, something more interesting, more appealing, more extreme is lurking just below the radar everywhere. The trick, both at SXSW and in the real world, is finding a gem in a giant metaphorical mountain of crap. It could be a four-piece French turntable collective, a visually disturbing Icelandic punk band, a stunning, traditional-Japanese “Geisha Song” singer, Mexican rappers or even young bluegrass pickers from Nashville. You never know what will pop-up while tracking the acts you do know about and actually want to see. All it takes is a random suggestion from a passer-by, getting to a venue early or taking a shortcut on the way to another band to end up in front of an act you never knew existed—perhaps from Istanbul, Iran or Indiana—changing your musical landscape forever. That’s common at SXSW and pretty much the point.

Officially there were over 1,400 bands in 65 venues but that’s only a small part of the story. Hundreds of parties and after-hours events, both official and not, non-SXSW venues with additional bands and even more musicians taking matters into their own hands by performing guerilla sets wherever they could also add to the mix. By the time you throw in the concurrent weeklong film and interactive festivals, the Austin Music Awards and numerous critics’ “picks” from every conceivable music rag, it’s impossible not to discover new and worthwhile music. 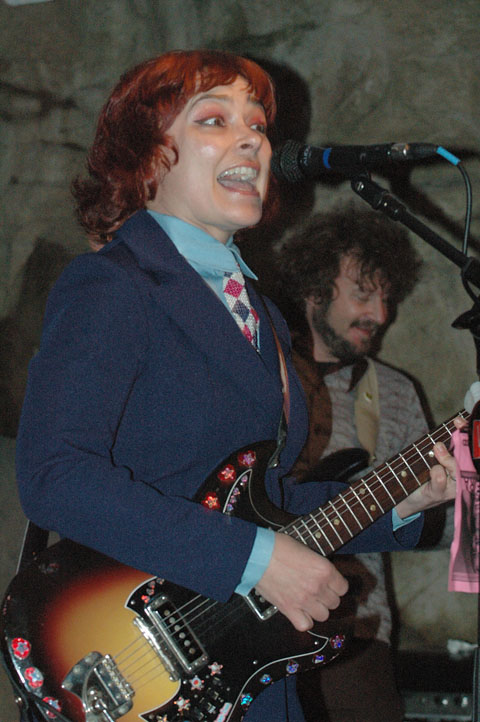 Or course, SXSW is not all about the new and different. Neil Young, for example delivered the keynote address at the conference while bands and musicians like the Beastie Boys, Morrissey, The Pretenders, Ray Davies, My Chemical Romance, Billy Bragg, k.d. lang and others held interview sessions and performed throughout out the four-day event. Their years of experience in the industry provide invaluable perspective during interview sessions while their performances raise the bar for the entire event.

Other, more contemporary bands being showcased have already launched and do not necessarily need the added industry exposure provided by playing SXSW. The Arctic Monkeys, Secret Machines, New Mastersounds, Spoon, Drive-By Truckers, New Pornographers, Flaming Lips, Talib Kweli and others needed no introduction but did provide some very memorable live music moments while serving as a benchmark for other up-and-coming independent acts.

Needless to say, most of the industry’s eyes and ears are tuned into what happens at SXSW and the event can be responsible for many bands’ success stories. Create enough buzz and your act could become the next Bloc Party, Matisyahu or Franz Ferdinand. In a way, the event levels the playing field for smaller independent labels and bands. After 20 years it is considered the place to showcase bands to the American music industry, both from these shores and around the world. A showcase at SXSW can easily influence an act’s career if just the right journalist, radio programmer or label exec gets turned on. Chris Thile perhaps said it best when he told the audience during his Nickel Creek showcase. “It’s like a reverse meet and greet,” he said. “Here it’s the bands that tell the audience ‘you guys are so cool and awesome, we love you.’”

In the end I was able to get in front of 40-50 different bands and heard buzz on as many more. It wasn’t easy finding bands that rose above the din of obnoxious alt-rock acts and their angry, screeching lead singers but I did all right. Unfortunately some serious compromising must take place since it’s only possible to be in one place at one time and sometimes the sure-things win out over a musical gamble. For example, I couldn’t pass up seeing the Beastie Boys from the rail of Stubbs nor the two unannounced secret Flaming Lips shows, both if which were in tiny venues and over-the-top. For me, the bands that really leave an impression not only play well, but have the intension of creating a great live performance as well—something the Flaming Lips have perfected. 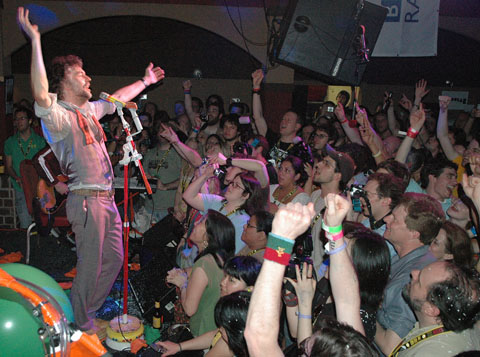 The highlights of SXSW 06 for this reviewer included Iceland’s Dr. Spock, which calls its music “heavy-metal cabaret with a dash of surf-porn cartoon funk.” The act was outrageously hilarious while laying down some heavy-duty, raging, euro-punk at the same time. Another standout was the “gypsy punk” act Gogol Bordello which has been called “Ukraine’s answer to the Pogues” and includes accordions and fiddles played at breakneck speeds. The band was one of the best at whipping the crowd into a frenzy and makes a stop at the Fox Theater April 2. Japan’s “Action Comic Punk Band” Peelander-Z performed another one its trademark outrageous sets and remains at the top of my favorites list. Another Japanese band, The Emeralds lived up to its reputation for playing “Samurai Rock ‘n’ Roll” and played a few strong sets at the event.

It wasn’t all just punk rock energy though. French guitarist and Hot Club of New York founding member, Stephane Wrembel and his Trio were an unexpected highlight. The group blends jazz, world, bluegrass, folk, Latino and rock, into a musical trip. I went to see the Brooklyn artist since David Grisman was joining him on stage but found myself as moved by Wremble as the much more well-known Grisman. Together they were out of this world. Nashville’s progressive bluegrass band The Stringdusters also proved to be quite talented and Nickel Creek’s showcase was another wonderful, acoustic and melodic reprieve from the noise most bands were making. 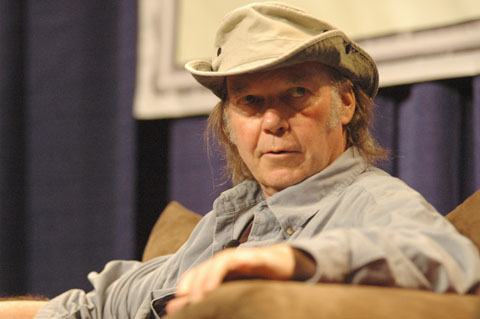 Other bands that proved to be hits and well received included Boston’s Apollo Sunshine which has a bouncy, ’60s-style melodic base and a powerful live show.  Manchester, UK’s Nine Black Alps, which are the “perfect midpoint between the abattoir-blues of early Black Sabbath and the fried atmospherics of Ride,” also turned heads. Australia’s heavy, fuzzed-out power trio Wolfmother was on many people’s must see list and didn’t disappoint. Imagine Grace Jones, Blondie, the Sugar Cubes, and Astrud Gilberto having a wild party and you’re only halfway to describing New York’s Brazilian Girls, which also made a buzz with its strong performances and unique sound. Stay tuned to hear more from bands like Snow Patrol, Tapes ‘n’ Tapes, Hellacopters, Editors, What Made Milwaukee Famous and Dr. Dog as well.

For anyone wishing to stay on the forefront of the independent music scene, whether business- or fan-related, SXSW is the place to do it. It’s also where you can expect the unexpected. Where else can you see hundreds of shows by previously unknown bands, hear veteran musicians answer audience questions, ride in an elevator with Sonic Youth’s Thurston Moore, dance next to Elijah Wood at a Helmet show, see secret club shows from huge performers, bump into Billy Bragg and have him tell you about his previous night’s exploits with Morrissey and James Blunt all being schmoozed and fed free food and drink by record labels, industry businesses and even entire countries? Nowhere but Austin in March.