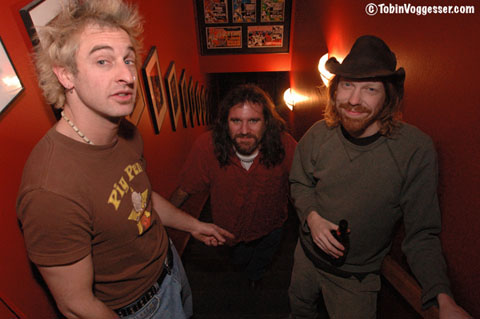 Occasionally, big ideas take on lives of their own. That’s what happened for Denver’s Polytoxic sometime around November, when the band was looking for a way to expand on its popular album-of-the-month concept.

In a recent conversation with The Marquee, keyboardist CR Gruver explained it like this: “We needed to maintain our sanity and our personal lives. So we thought, instead of doing an album every month, why don’t we do a soundtrack, a couple of times a year? And then of course the first thing you think of is ‘Spinal Tap.’” Thus, what began as a flash of inspiration fleshed out into a full-on, multi-media live performance of the music from the legendary film.

The added joke is that the band will stage this performance on April Fool’s Day. “Ironically enough,” said Gruver, “the original album was released on April Fool’s Day back in 1984. We figured it must just be a connection we have with Spinal Tap,” he said with a laugh.

This connection was hardly predicted prior to 2003, when founding members Gruver (on keyboards and bass) and Tori Pater (on guitar) were running in different circles. Both had recently moved to Denver, but Gruver played solo piano gigs while Pater played guitar in the local Henry Parson’s Project. The two eventually came together in Two Ton Moxie, where their work inspired a new band. But Polytoxic didn’t reach its full potential until about a year ago with the addition of drummer Chad “Chadzilla” Johnson. Once Johnson was on board, Polytoxic began to gel.

Gruver’s keyboard often leads the sonic assault, accompanied by Pater’s raspy rock and roll vocals and the persistent, driving beats of Johnson. The result is a band with soul that can seriously jam. And they know how to throw a hell of a party. They released their first full-length album, entitled First Steps, in 2005. That same year, Polytoxic was awarded Best Live Music Showcase by Denver’s Westword. That recognition was followed quickly by the recently awarded Best Concert of the Year from the same publication, which acknowledged the stunning tribute the band played to Scorscese’s elegiac The Last Waltz. Polytoxic have since put out a collaborative effort with Atlanta’s Outformation on vinyl, and expect to release a DVD sometime in April.

However, the Spinal Tap gig is by far the largest production the band has ever attempted. According to Gruver, “there will be video snippets, props for the big arena rock style show, a main stage for that show and a smaller stage up in the balcony, where all the other stuff goes on.” In addition to the band, there will be a colorful cast of characters on hand, including dancing midgets, spontaneously combusting drummers, and smoke-breathing stage props.

“We thought it would be hard at first, but the more people who have joined our team, the more possible it seems,” said Gruver. “A lot of our friends are artists, or production people, or stage people, and they’re all pitching in and making it a whole lot easier. We’re very fortunate to have all these great, creative people.”

While Polytoxic is decidedly good at covering other people’s material, they are most at home playing their original songs. The band never plays any of its music the same way twice, which allows them to move freely within the songs and play off each other rather than from rote memory. Gruver classifies most of their music as “improvisation-based jams, which are funk- and groove-oriented.” According to the band’s myspace web page, their music sounds like “Halloween candy mixed with Japanese B movies about large lizards. Basically, you bring your booty, and we’ll bring the PARTY!”

Polytoxic can inspire the most reluctant of audiences into an absolute dancing frenzy. Although they will be playing the music of Spinal Tap for most of the evening, there will also be a set of their own innovative music, with plenty of room for Polytoxic’s special brand of psychedelic improv.