Trending Stories from The Marquee
You are at:Home»Features»10,000 Lakes in line to be the jam fest of ’06
By Marquee Magazine on May 1, 2006 Features, Festival Coverage, Jeffrey V. Smith, News 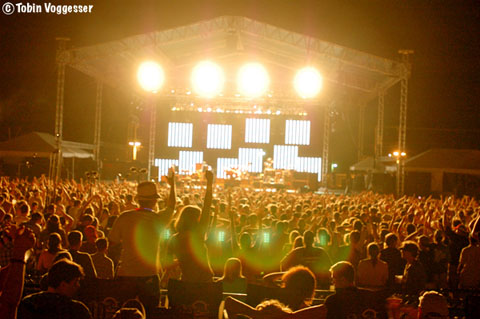 In only its fourth year, the annual 10,000 Lakes Festival has quickly become one of the largest destination festivals in the country, featuring many of the top acts in the jamband scene. The festival showcases over 35 artists and bands on four stages, including the Barn Stage on a shady hill overlooking the concert bowl, the Field Stage, the Saloon Stage for intimate concerts and late night jams, and the Main Stage.

Artists are given lengthy set times as well since, unlike other festivals, the event doesn’t try to fit every touring band in the nation on its bill. While not as massive and overwhelming as events like Bonnaroo, 10,000 Lakes Festival is much better at allowing music fans the chance to experience nearly every act on the line-up with little overlap. The festival also features a variety of unique sets and artists not found elsewhere. Other benefits over other large festivals include wireless Internet access, numerous bars and food/beverage/merchandise booths along with large, permanent restroom facilities with running water and showers surrounding the concert bowl. Camping at the 600-acre Soo Pass Ranch includes numerous lakeside, wooded and rolling-field campgrounds built specifically for fans to enjoy a spacious, friendly and comfortable setting.

(As calculated by mapquest.com from Denver, Co., to Detroit Lakes, Minn.).

ALONG THE WAY: The drive to northwest Minnesota from Denver couldn’t be more exciting. The drive traverses nearly the entire length of Nebraska’s spectacular corn country and sites such as the Kool-Aid Man’s Footprints at the Hastings Visitors Center. Historic sites commemorating, Lewis and Clark and the Oregon Trail can be found along the way as well. Nebraska’s renowned and very unique museum, the Great Platte River Road Archway Monument sits about 3 miles east of Kearney and rises over Interstate 80 as a large arch. The route takes drivers through Lincoln, the state’s most, and only, progressive town and home to the University of Nebraska. Next, the route travels through Iowa’s scenic corn country before reaching Sioux City where riverboat gambling is king. This is followed shortly by Sioux Falls, S.D., where the falls of the Big Sioux River are a popular attraction. About 50 miles short of the festival, the route takes the driver through exciting Fargo, N.D. home of The Fargo Theater and its mighty Wurlitzer Organ.