Trending Stories from The Marquee
You are at:Home»Brian F. Johnson»Bonnaroo is king of modern-day festivals
By Marquee Magazine on May 1, 2006 Brian F. Johnson, Features, Festival Coverage, News 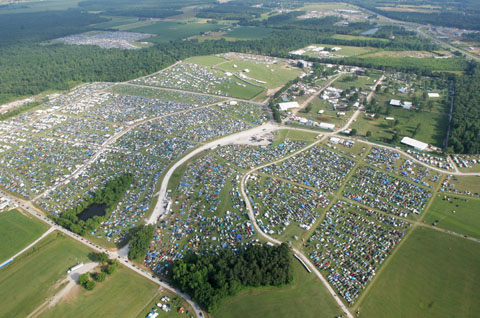 This is the mother load. Bonnaroo, now in its fifth year, has become one of the country’s biggest festivals and each year turns the 700-acre farm in Tennessee into one of the biggest cities in the state. The four-day, multi-stage camping festival brings together some of the best performers in rock and roll, along with dozens of artists in complementary styles such as jazz, Americana, hip-hop, electronica, and just about any contemporary music you can think of.

In addition to dozens of epic performances, the festival’s 100-acre entertainment village buzzes around the clock with attractions and activities including a classic arcade, on-site cinema, silent disco, comedy club, theater performers, a beer festival, and a music technology village. For its peaceful vibe, near-flawless logistics, and unrivaled entertainment options, Rolling Stone magazine named this revolutionary entertainment experience one of the 50 moments that changed the history of rock and roll. Be careful of the heat and the summer thunderstorms. Come prepared for that and the big crowds if you want to enjoy it.

The Refugee All Stars

(As calculated by mapquest.com from Denver, Co., to Manchester, Tenn.).

Along the way: If you’re going to Tennessee, you have to go to Memphis. You just HAVE to. Memphis is about four hours away from Manchester, Tenn., and is home to Elvis Presley’s Graceland. The city bills itself as the “Home of the Blues” and the “Birthplace of Rock ‘n’ Roll.” In addition to enough Elvis to fill a lifetime, Memphis is also home to the Gibson Guitar factory, the historic Beale Street, The Delta Blues Museum, The Rock N Soul Museum and the Jack Daniel’s Distillery!