Trending Stories from The Marquee
You are at:Home»Features»Cincinatti’s MidPoint is Indie for indie’s sake
By Marquee Magazine on May 1, 2006 Features, Festival Coverage, News 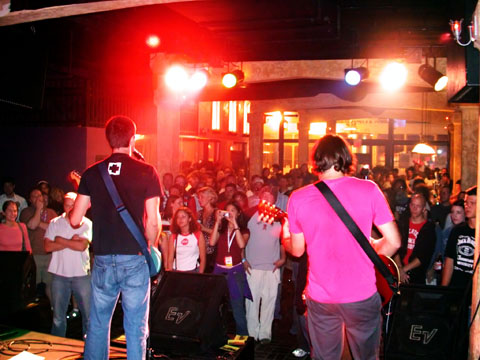 Now in its fifth year, Cincinnati’s MidPoint Music Festival considers itself to be the “biggest and best” in the region and goes by the slogan “Independent Music for Independent Minds.” Much like South by Southwest, MidPoint is a festival and a conference, presenting bands from around the world along with a variety of panels and a trade show. What’s unique about MidPoint is its dual keynote speakers — one representing artists, the other representing the industry. Last year, it was singer Greg Dulli, formerly of Cincy’s own Afghan Whigs, along with writer/editor Alan Light, whose credits include Spin and Tracks magazines.

To be announced in early July.

ALONG THE WAY: I-70 rolls right through St. Louis, Mo., the birthplace of Chuck Berry, who was born in a three-room house at 2520 Goode Ave. Berry memorabilia is on display at the Blueberry Hill club/restaurant, located in the Loop at 6504 Delmar. While in Cincy, be sure to visit Cincinnati Music Hall, a National Historic Landmark and home of the Cincinnati Opera. Up the road nearly four hours away is Cleveland, which is home to the Rock and Roll Hall of Fame, for those who want to add a few hours to their trip.