Trending Stories from The Marquee
You are at:Home»Cover Story»Gomez releases its most accessible album to date, How We Operate
By Marquee Magazine on May 1, 2006 Cover Story, Features, Interviews 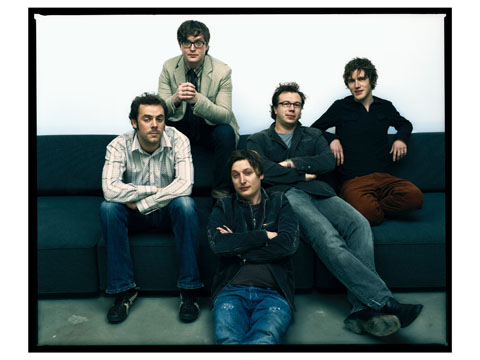 In 1998, then 19-year-old, charismatic lead singer Tom Gray, of British rock band Gomez,  had his eye on politics. He was set up with an internship in the U.S. with a Democratic senator when Gomez was offered a recording contract. He abandoned the internship and hit the road. That year Gomez was jettisoned into the limelight when they received the coveted Mercury Music Prize for their debut album Bring It On.

“When we started we didn’t think we’d sell a single record,” said Gray, nursing a hangover at his home in Brighton, England, in a recent interview with The Marquee. “We thought we’d have a bit of fun.” Intimidated by fame at such a young age, Gomez took a step back and has turned into a hard working touring band releasing its seventh album, How We Operate, this month. “We’ve done our career backwards,” joked Gray.

Since 1998, Gomez has stayed true to its music and continues to revolutionize its sound with every album they put out. REM’s Peter Buck once told Gray, “Don’t make the album they want you to make,” and it’s a sentiment that seems to have found a home with Gray. “I’ve got no real idea about career arc. You can try hard to achieve some kind of success, but it comes when you least expect it,” he said. “I think we’ll just make plenty of music and some people will like it, and some people won’t.”

With How We Operate, Gomez, for the first time, brought in a producer, Gil Norton (The Pixies, Foo Fighters), to weald the whip. “We’d never rehearsed a song before we went into the studio,” said Gray. “This time we spent a week at Blackie’s (Gomez bassist, Paul Blackburn) playing lots of different songs together. And I went to L.A. and worked with Ian for a week just writing, and then we did two weeks with Gil just choosing the 12 songs and then playing them a lot until we were happy with them. At one point we were recording so fast we didn’t hear the songs back until the second or third week.

“The last record (Split the Difference) was recorded in spits with some people not there and on the other side of the world. It was like recording three different records at the same time. But, with How we Operate we said, ‘What 12 songs can we all agree on?’ We recorded in a month and then mixed in two weeks.”

For Split the Difference, Gomez brought in producer Tchad Blake to mix the recordings. Explained Gray, “We mixed with him, but he insisted that he didn’t get a producer credit. He was more part of the chaos.” So, working with Norton was a whole new experience.

Gray’s respect for Norton started long before Gomez. “I’ve been a huge crazy Pixies fan my entire life,” said Gray. “I started talking to him about eight months ago, and he was really into the idea of producing How We Operate and had been a big fan for years. We knew we had to make a record quickly. We had to have a record ready for the first six months of this year, to keep up momentum. He’s from Liverpool so that helps, and he’s a fan of the same football team as us, which is important,” said Gray.

For a band with three songwriters — Gray and fellow lead singers, Ben Ottewell and Ian Ball, along with the elemental inclusions of bass player Paul Blackburn and drummer Olly Peacock — creating a unified vision may be easier said than done. In fact, fused eclecticism has become a trademark of the Gomez sound.

However, integrating consistency on How We Operate was something important to the band. Gray explained that they achieved this through good old-fashioned elbow grease. “We just fucking worked hard — made sure we were all working together on it,” Gray said. “It kind of has a theme about relationships and friendships and how we perceive ourselves.

Many would say that How We Operate is the most accessible Gomez album to date. This is much to do with the influence of Gil Norton. “We knew we needed someone who was kind of a disciplinarian with a very clear idea of what they wanted to do. Gil said, ‘this is the kind of record I wanted to make … I’m gonna simplify your arrangements.’ And we said, ‘O.K.’ His ability is sophisticated, but his tastes are simple, and it’s not unhelpful to make an accessible record.”

Public consumption is something that Gomez has struggled with over the years, and they have often been passed up by radio station play lists for lack of easy digestibility. However, Gray seems undaunted. “Our career has just developed the way it’s developed. We never did it to become famous. That was never really the plan. Developing some fame was kind of scary when we started. I was only 19 or 20 years old. We eschewed that anyway. We didn’t really do the stuff we should have done if that’s what we wanted. It’s our own doing.”

What Gomez does focus on is touring. They have relentlessly been on the road for the last eight years and have become known for their transcendent live performances. “We have a highly un-premeditated stage show. There’s no plan, which creates a level of spontaneity. You can’t really plan to be spontaneous,” he said.