Trending Stories from The Marquee
You are at:Home»Features»Great American Taxi still taking fares and expecting a summer album
By Marquee Magazine on May 1, 2006 Features, Interviews, Monica Banks 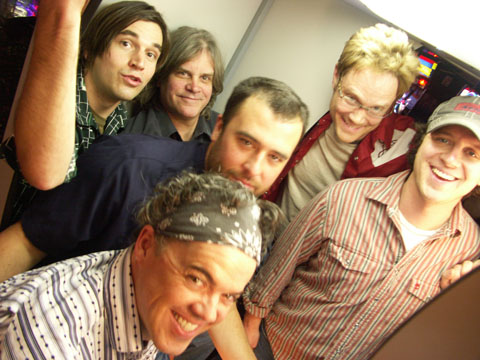 Everyone’s taught not to hitch a ride with strangers, but when this Taxi swings through town, it would be foolish not to jump in.

With the days of Leftover Salmon behind him, Vince Herman has joined forces with Mountain High Music to introduce the Great American Taxi. The group was put together for a benefit show last year and was originally thought to be temporary. However, Herman, Chad Staehly, Jefferson Hamer, Brian Schey and Jake Coffin have such great chemistry that the shows just keep coming effortlessly.

Even the band name was easy to come by. Great American Taxi is a term that was once used to refer to Herman’s skiing style (picture Herman careening down the slopes). When Staehly and Herman were trying to come up with a name over drinks at a bar, it seemed to be a perfect fit. “It was the easiest band name I’ve ever had to come up with,” Staehly said.

A taxi is also a good metaphor for the band itself, which leaves a standing invitation for musicians to join them on stage. “The lineup is somewhat flexible. You never know who’s going jump in the Taxi,” Herman said. Eben Grace sits in on the pedal steel when Taxi is in the area; the band has also been joined by the likes of Jeff Austin, Reed Foehl and many others. All are welcome aboard the Taxi.

While the band has a self-described Americana sound and an underlying purpose to re-introduce some twang to the Front Range, the band’s style can change in a moment’s notice. “We dwell in a few different worlds,” Staehly said. Taxi material has such a wide variety. The band is fearless with Herman’s extensive song repertoire. “Vince is one of those guys that’s a walking juke box,” Staehly said. Herman often calls on his song archive, coming up with songs the band has never rehearsed or played before.

The songs that do come out are belted out with a soulful happiness that can only come from musicians having an authentically good time. One show can range from country to rock and roll, to bluegrass, indie, slamgrass or jamband. “I’d call it a hippie-country-big band. The no fear thing is different from the Salmon days,” Herman said. Herman’s youngest son Silas has even joined the band a couple of times on stage, adding some Green Day to the mix. For the Great American Taxi, one song can change genres every time it’s played.

Previous experience within the band is diverse, ranging from bluegrass to ska. “At heart we’re a rock and roll band, but that really doesn’t mean anything anymore,” Hamer said. “There are so many different kinds of rock.” Much of the new Taxi material originated one weekend the band spent up at Staehly’s house in Fort Collins. The band brought up a mobile studio and got busy. In one weekend they collectively wrote 10 songs.

And the band has not only talent, but a message as well. The song “Appalachian Soul” has a beautiful melody but sends a message about mountain top removal in Virginia. “Essentially, they are raping the mountains,” said an appalled Herman, who gained an appreciation for the Appalachians after attending college back east.

While Taxi realizes the importance of spreading a message, the band is never short on good times and light-hearted laughter. “It’s fun to be able to switch from a song with a message and involving current events to some that are more frivolous,” Hamer said.

With good vibes and a wide variety of experience, the band is looking forward to recording their first full-length album this summer. Most of the members have other musical projects going on, but they intend to stick with the Taxi for as far as it will take them. “All bands are temporary, whether that means 30 years or two,” Hamer said.