Trending Stories from The Marquee
You are at:Home»Features»Mike Compton and David Long Stomp into town with new album
By Marquee Magazine on May 1, 2006 Features, Interviews, Kathy Foster-Patton 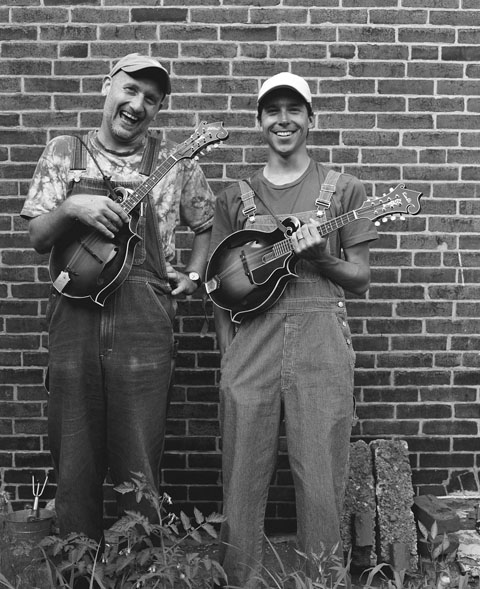 Stomp: A dance involving a rhythmical, heavy step. Mike Compton and David Long will blow into town this month to give Denver audiences a taste of their first duet CD, aptly titled Stomp. There are two “stomps” on the recording, as well as a “hop” and a slew of other old-time songs.

These musicians, both writers and composers, took time out from their busy schedules to speak with The Marquee about their music, working together, and the support they received from David Grisman for this endeavor.

Compton and Long have been performing together since the spring of 2003, brought together by a mutual love of a variety of string music — rural country blues, old time, bluegrass, and early black string band music. Since hooking up, they have toured coast-to-coast, playing theaters, festivals, and house concerts. Stomp is their first endeavor at compiling the music that they like to play.

“We wanted to learn some older music, get serious and put something out that reflects our mutual appreciation of old string, early country blues, music that has dropped from the mainstream,” Compton said.

Long echoed the sentiments, “We wanted to pick material that’s not overdone, but that is an accurate and honest representation of that time period.”

The two really did their research to hone in on the sound that they wanted. For the influences on their song selections, Compton cited jug bands, string bands, the R.L. Burnside Record Store, the Delmores, and Charlie and Joe McCoy. He explained that they poured over material from Document Records with its compilations of rare, classic, and vintage music in the genres of blues, jazz, boogie-woogie, gospel and country. They also delved into the archives of Old Hat Records, which reissues vintage American music. Long pointed out the additional, obvious influence of Bill Monroe, as well as that which was perhaps less apparent, from the Mississippi Sheiks.

The first inklings of the idea for the recording came from none other than mandolin virtuoso David Grisman. He mentioned to the two mandolinists at his first symposium in 2004 that he thought they should cut a CD. Some months later, they called him back and said they had decided to do just that. Grisman provided them tremendous support throughout the process; they recorded in his studio, and he released the CD on his label, Acoustic Disc. Further, although the title might seem like a no-brainer, the idea came about late at night and also originated from Grisman.

Recording had its challenges. Compton was sick during the one-week window that they spent in Grisman’s studio. They learned some of the songs during that week, in between recording them. Compton commented that they had little time to get everything together once they decided to record. To complicate matters further, Grisman’s studio flooded one day. Then, after that one hectic week, it took another year to get the recording released.

The two said that the whole album is a thrill for them, but that certain songs, like the Compton original “Big Indian Blues” stood out amid the rest.

Long’s other favorite was another Compton-penned tune that he wrote during a period when he was driving the bus for John Hartford.  Compton himself said, “Overall, I think that the non-Monroe material worked the best, but I really liked ‘Evening Prayer Blues,’ (which is a Monroe original) and ‘January Nightmare,’ a Long original.”

What makes the album work so well is the mutual admiration the musicians have for each other. “He’s got lots of energy and is really positive and easy to get along with,” Compton said of Long. “It’s refreshing because we learn from each other. I really appreciate his use of Bill Monroe’s language.”

Long speaks of Compton, Grammy-winning mandolinist from the Nashville Bluegrass Band, with a hint of awe. “Well, it’s a dream come true to play with one’s musical heroes,” he said.

While the pairing may have originally been thought of as a one-off, Compton and Long are looking for an agent, thinking about their next record, and searching for more historical material.  Compton shared that they already have plenty of material to go back into the recording studio.  They are interested in songs by contemporary writers that sound like the Carter Family, as well as mandolin duet material and tunes for octave mandolin.