Trending Stories from The Marquee
You are at:Home»Features»RockyGrass hosts traditional bluegrass pickers
By Marquee Magazine on May 1, 2006 Features, Festival Coverage, News, Timothy Dwenger 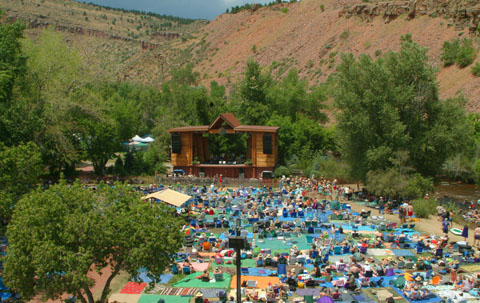 Set in the beautiful town of Lyons, Co. this festival combines some of the biggest names in bluegrass music world with one of the most beautiful venues in the world, period. Along the St. Vrain River, the Planet Bluegrass Ranch is an oasis nestled among the majestic red rock formations that dominate the Lyons landscape.

This 33-year old festival was nominated last year for the International Bluegrass Music Association’s Event of the Year, and, as might be expected, it attracts fans old and young from all corners of the country and probably the world. RockyGrass tends to stay true to traditional bluegrass music and is a more pure bluegrass festival than its big brother in Telluride. Like Telluride, the on-site camping may be close quarters but it fosters new friendships, jam sessions and more than a few good laughs. For those who shy from big crowds the relatively low capacity of the Ranch allows this to be one of the most intimate feeling festivals around.

ALONG THE WAY: In Lyons the Planet Bluegrass Ranch reigns supreme, but just down the road is Oskar Blues, THE music venue of Lyons. With a flare for blues and cajun, Oskar Blues is a great after-festival spot, before the camp-side picks get going. The venue always has special guests on festival weekends, and it’s never known who from RockyGrass’ main stage will show up at the club, post-festival.