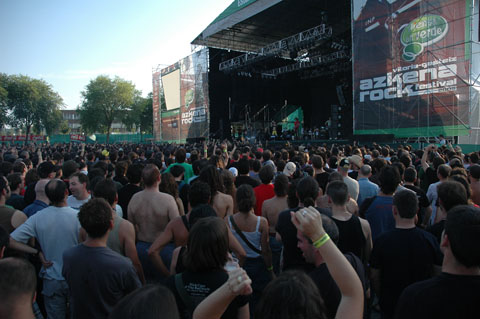 In just four years, Spain’s Azkena Rock Festival has grown from a small gathering of 3,000 people to last year’s record-setting 32,000 attendees, and with the acts it’s pulling in, it’s no wonder.

Azkena 2005 boasted a lineup that ranged from Wilco to Gov’t Mule, Queens of the Stone Age and The Pogues, and a ton of others, including Boulder’s own Rose Hill Drive.

While the lineup for Azkena 2006 has yet to be announced, the promoters are saying that it will continue on with the precedent they have set in recent years.

Supported by the Basque government, the Vitoria City Council and the Alava Cultural Foundation, the Azkena Rock Festival has become more than just a big rock show; it has transcended into a cultural phenomenon, even going so far as to earn governmental awards for its obvious impact on tourism in the region.

With the legendary Glastonbury Festival on hiatus this year, Azkena is taking on the role of the faithful torchbearer of the contemporary music movement in Europe, not only bringing in acts that customarily play harder rock, but also highlighting pop, rhythm and blues, Americana and punk rock.

Azkena is held in the Basque Country of Spain. While the area is noted as one of the most industrialized portions of the country, it is also wrought with history, nature and culture, featuring everything from Gothic cathedrals to modern-day golf courses. A highlighted attraction is the steep Cantabrian coast.

Visitors should be cautioned that, much like the afternoon sun showers that hit the Front Range each day, this region has its own brand of daily showers, called “txirimiri,” which is typically a very fine rain.

The organizers of Azkena also handle two other festivals in the region, the Santander Summer Festival (held the first week of July), which this year will feature Prodigy, Black Eyed Peas, Editors, and HIM, among others, and the Bilbao Live Festival, which will be held for the first time this year (July 13-15).

Total Est. Time: Considering the varying number of flights, routes, layovers and connections, the flight can take anywhere from

Along the way: You’re going to be in Europe, so there is no shortage of things to see, but if you don’t have the time to travel outside of the festival’s region, there is a musical must-see, located right in the region: The Bilboa Orchestra Symphony. It was described by the international opera star Monserrat Caballé as the most beautiful room she had ever sung in.

The Conference and Music Hall was built by two architects, Soriano and Palacios, and opened in 1999. It has been acclaimed as one of the greatest contemporary feats realized by Spanish architects, symbolizing the last ship built at the old Euskalduna yard as an enormous facility at the heart of the city. The auditorium has seating for 2,164, exceptional acoustic capacity and a world-renowned organ.