Trending Stories from The Marquee
You are at:Home»Brian F. Johnson»Telluride Bluegrass goes way beyond the twang
By Marquee Magazine on May 1, 2006 Brian F. Johnson, Features, Festival Coverage, News 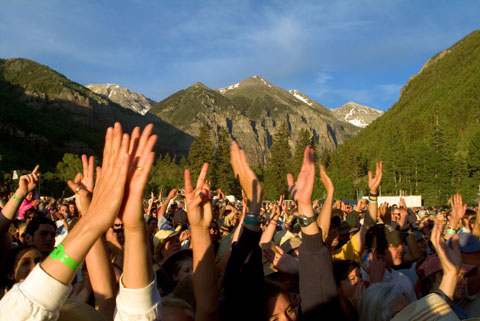 For 33 summers Telluride Bluegrass has been the premiere festival in Colorado. While the festival is and always has been routed in its bluegrass heritage, in recent years the promoters have continually pushed the envelope of what bluegrass means, changing the festival into more of an Americana catch-all music festival.

From traditionalists like Del McCoury to progressive bluegrassers like Sam Bush, this year’s line-up is no different. But the festival also has some very non-bluegrass acts, like The Barenaked Ladies and southern rockers and storytellers Drive-By Truckers.

Set amid the picturesque San Juan mountains, the festival is quite possibly the most visually stimulating gathering of its kind anywhere in the world. The natural backdrop is just that good, and Planet Bluegrass, the company that organizes the festival, runs it like a well-oiled machine, giving festival goers a fantastic outdoor concert experience.

ALONG THE WAY: The drive to Telluride can sometimes seem to take forever, but the drive through Glenwood Canyon makes it all worth while. It begs to be driven in a top-down convertible with music cranking.

Once in Telluride, trips via gondola over to Mountain Village provide some of the most spectacular views of the Telluride Box Canyon. A hike to Bridal Veil Falls, the highest cascade in Colorado, is also a must.