Trending Stories from The Marquee
You are at:Home»Features»The Helio Sequence returns to Denver on strength of The Love and distance
By Marquee Magazine on May 1, 2006 Features, Interviews, Molly Chappell 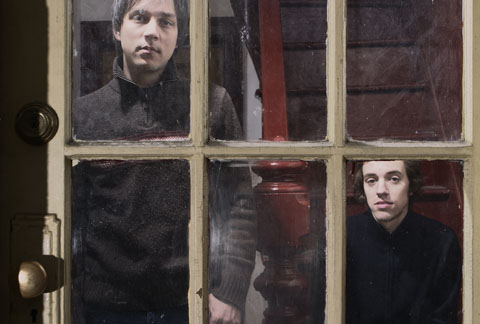 Helio Sequence, a duo out of Portland, has achieved what most musicians dream of — starting out playing in a basement, getting signed by a label, touring with the band of the time — in this case Modest Mouse — and becoming “professional artists.” Vocalist and guitarist Brandon Summers said sheepishly that he’s just getting comfortable with saying the words “professional artist.” He pauses and reflects, adding, “Whatever that means,” with a laugh.

Helio Sequence put out their first EP, Accelerated Slow Motion, in 1999, but Summers and his band mate Benjamin Weikel have been playing together since they were about 16, when they bonded through their mutual love for underground music. “We were surrounded by people who knew nothing about underground music. When we met we were listening to stuff like My Bloody Valentine,” he said from his Portland home in a recent interview with The Marquee.

Their mutual love of music pushed them to record at the record store they both worked at, Beaverton Music. Reflecting on the feverish production of Accelerated Slow Motion, Summers said, “It was a different experience because we had to record everything at night when the store was closing. I can still remember the feeling of the era — the delirium of putting everything together while gulping down coffee until 6 a.m. and then going to work next morning.  We wanted to get out of the suburbs so badly. It was so suffocating and stifling to be 30 miles away from where we were. There was a culture divide and nobody knew the music that we were listening to. It seemed as though everyone was complacent about life. It was a really manic time with the feeling that we had to get out of there … and we did!”

After producing Young Effectuals, the duo’s first full-length album, they were itching to move forward, both from their locale and in terms of the group. “We didn’t have anywhere to go. We were barely getting by, and our backs were up against the wall. We had no where to practice,” said Summers. But move the musical brothers did.

When Modest Mouse’s percussionist went on hiatus, Weikel began touring with them while continuing to put full efforts into the duo. While on tour with Ugly Cassanova, Issac Brock of Modest Mouse let them record in his garage studio, which gave them the chance to feel more at home. The album was put out somewhat frantically, but nevertheless it was a great success for an independent release.

How times have changed? The guys now have their own studio and their last album, Love and Distance, was produced under a strict regiment of eight-hour days more than five days a week.

This physical transition is also apparent in their sound. Helio Sequence has moved from a somewhat frantic sound in their EP Accelerated Slow Motion to one that is masterfully created in a place where there’s room for their art to fully flourish. In their most recent album, The Love and Distance, due out in early June, their sound, while always imbedded in found sound and a focus on instrumental rifts, has become more fluid.

“A lot has changed in the five or six years we’ve been playing. We focus a lot more on songs and songwriting,” said Summers. “It is a lot easier to do a loop in an instrumental piece. We are also more aware of different types of music; all different types of music find a way into our songs. When you are younger, you come from a more naïve place where you have a favorite band, and you want your music to sound just like their band. It’s like saying, ‘I love the Pixies’ and trying to imitate their sound.”

One element that gives the duo such a sound of their own is that they are just two people. “Working with just the two was a huge idea when we first stared in ’96,” Summers said. “There were no other duos around, so we had a stripped down sound, but it was the chemistry that worked for us. It’s like a dual dictatorship. We actually had auditions and played with bassists for a while but in the end we just worked best together.”