Trending Stories from The Marquee
You are at:Home»Features»Wakarusa is getting big in short order
By Marquee Magazine on May 1, 2006 Features, Festival Coverage, Monica Banks, News 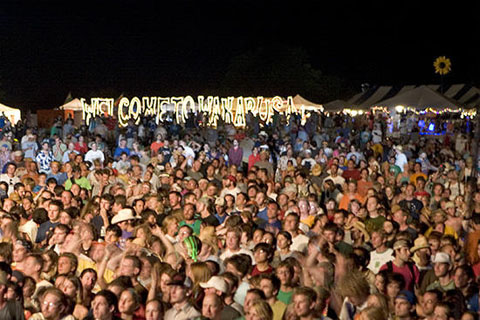 Wakarusa is a Native American term meaning “ass-deep,” somewhat unfitting seeing that this festival puts any patron way over their head in music. The Wakarusa Music & Camping Festival is a four-day party in the heart of the Midwest. Born in 2004, the festival originally featured over 70 artists in a diverse and eclectic line-up. In 2005, Wakarusa returned and quickly established itself as a premiere, grassroots event in the nationwide outdoor music scene. Last year the event featured over 80 artists, five stages and over four days of non-stop music and entertainment. This year’s throw down is looking more and more like the highlight of the summer.

Robert Randolph and the Family Band

Bela Fleck and the Flecktones

Bernie Worrell and the WOO Warriors

Jerry Joseph and the Jackmormons

(As calculated by mapquest.com from Denver, Co. to Lawrence, Ks.).

ALONG THE WAY: Not far from Lawrence is Bonner Springs, Ks., a town that might otherwise forever be as obscure as dozens of other heartland towns, except for the fact that Bonner Springs High School is the home of Gene Clark, one of the founders of The Byrds. It may not be the Rock and Roll Hall of Fame, but since it’s only a half an hour away from Lawrence, it’s worth a side-trip for a snapshot.