Trending Stories from The Marquee
You are at:Home»Cover Story»Eagles of Death Metal rock sexy with wit, ’staches and a new kind of shock
By Marquee Magazine on June 1, 2006 Cover Story, Features, Interviews, Jeffrey V. Smith 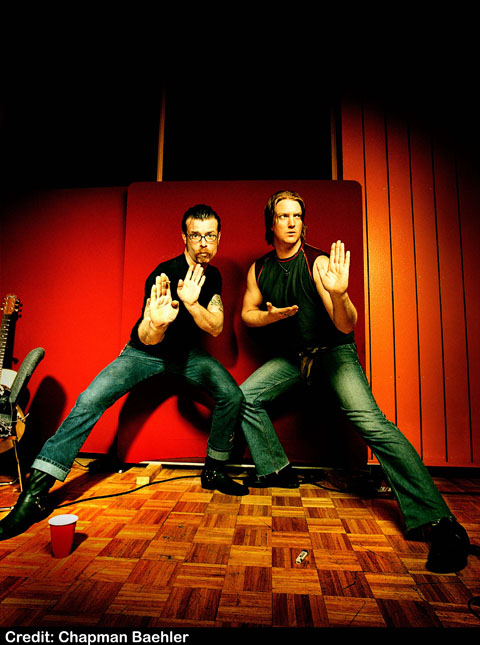 Little Richard should be proud. And, since that’s the goal of the Eagles of Death Metal, they should be too. If anyone does justice to the spirit of rock and roll and its original wild-man architect, it is Jesse ‘The Devil’ Hughes and his band.

Forget that the act’s latest CD has topped the sales charts, is getting great press, its music is being used in commercials and film, or that it has joined acts like The Strokes and Foo Fighters on big-venue tours and are invited to play festivals in the U.S. and Europe.

When it comes to measuring his band’s success, it’s making Little Richard proud that is most on the mind of the Eagles of Death Metal founder. Ultimately, Hughes’ band, which he created with his best friend and Queens of the Stone Age founder Josh Homme, is about reminding people that rock and roll is about having a good time, having fun and not taking anything too serious. Being glamorous, sexy and flaunting a big, gorgeous moustache fits nicely into the equation, too.

Much like Richard, the Eagles of Death Metal are all about shocking their audience. These days, however, that doesn’t mean what it used to. Hughes, who recently spoke with The Marquee, explained that the band is indeed into shock value, just in a “more clever” sense of the term. “Bleeding on stage or pissing on a crucifix isn’t really shocking anymore,” he said. “Shocking this day and age is to go up on stage and actually smile because you’re having a good time and actually not bullshit about the fact you’re trying to get laid. It’s about dancing and having fun and just kinda not taking everything so seriously.” Like Hughes enjoys saying, “This ain’t no Bible study, this is rock and roll.”

Also, like Richard, Hughes is into the glamorous side of rock. “Glam isn’t really about make-up. It’s about a glamorous attitude, it’s about almost a Praetorian or regal notion about yourself concerning the performance of rock and roll,” Hughes said. “That’s when it becomes glamorous. That’s where I like to approach the glam element of rock and roll.” Makes sense since one can’t really have a nickname like “Boots Electric” and not have an attitude like that.

While the Eagles of Death Metal may exist to make Little Richard proud, the band doesn’t quite share the same sound. In fact, Hughes calls his band’s music Disco Fuck. “I don’t know if you can print that, but that’s what we call it,” he said. “It’s basically bluegrass with stripper beats. Good fun dance music with a good beat. That’s really all it should be. It shouldn’t be brain surgery and it shouldn’t be hippie shit.” According to Hughes, the band “kind of came together on its own” while he and Homme “were fooling around one night smoking weed” and came up with the name. Homme then challenged Hughes to come up with music for a band that could be labeled The Eagles (think Hotel California) of death metal. “From there it just wanted to do it on its own,” said Hughes.

Hughes has commented that other possible takes on the band were the Yanni of Mariachi, the Styx of Punk Rock and the Air Supply of Techno.

Familiar elements stand out from the act’s otherwise original sound and an unashamed admission from Hughes explains why. “When I wanted to start writing music, I didn’t want to fuck around. I wanted to go do it immediately, so I looked at my favorite bands and said ‘I’ll just rip them off.’ I use Keith Richard’s open tunings, which is basically bluegrass-rooted, and stripper beats, which are what I love, like burlesque music — down and dirty stripper beats.” Add in Hughes’ uniquely demented, yet sexy, falsetto vocals and you’re starting to get the idea. By the way, if you haven’t figured it out yet, the band doesn’t play heavy, let alone death, metal.

While the sound may not be the same, Hughes’ live act does share Richard’s penchant for turning on the heat. What’s rock and roll, after all, without a live show and the Eagles of Death Metal are all about playing live.

Hughes explained that Death By Sexy, the act’s second disc, is only a “promise” of what fans get to see live. “For me it’s absolutely everything about the live experience,” Hughes said. “I want everyone to have a good time, I really do. I want everyone to walk away going ‘That was one of the best fucking rock shows I’ve ever seen.’ That should be my goal and that should be everyone’s goal: to do the best they possibly can do. This is a gift what we’re doing. And it’s a gift bestowed upon us by the people buying our records and coming to our shows, they better have a fucking good time.”

This refreshing attitude of Hughes’ to not only acknowledge but also give back to his fans seems to have come from a bit of fatherly advice. Keep in mind, however, that his father was “a rocker” and played in an early version of the Marshall Tucker Band. The guitarist said his dad used to tell him there were two types of rock bands in the world. There is the kind of band that will “come out and jack-off on stage for everyone to watch,” and there is the kind that “fucks everyone in the room.” He’d then ask his son, “Which kind of band would you want to be in?” Hughes’ answer must be obvious by now.

With that kind of sage wisdom at your fingertips growing up, it is no wonder Hughes loves his fans and when on stage he “interacts fully” with them. “The audience is a group of people that I love more than anything else when I’m up on stage,” he said. “And, when they love me a little bit, I give it right back in spades, times ten. I want to love each and every one of them so hard it hurts.” He explained by saying, “If someone came across the street to piss on me if I was on fire, I’d say ‘thanks.’ If they come and pay money to see me at a rock show, I’m hitting it. I’m really appreciative of that. Every day in rock and roll is a gift for me.”

His love affair with his fans is an effort to counter what Hughes calls an “entitlement attitude.” Everyone feels entitled to something, he explained. “The only thing you’re entitled to once you’re born, is death. That’s it. I don’t think anyone is entitled to shit. You earn it and then it’s yours. If you don’t, you don’t deserve it. Rock and roll is not anything anyone can actually deserve in all respects of the phrase. I don’t know anyone that actually deserves what we’re getting but we’re getting it and it’s good, so we should appreciate it.”

Hughes feels that when musicians walk on stage and act like their fans are “fucking lucky to get to look at them,” someone should “kick their ass.”

Despite Hughes’ insistence that his band came to life on its own, it’s his outrageous personality, and perhaps his fabulous mustache, that gives the band its life and its success. His friendship with Homme hasn’t hurt either. “I’m a secret weapon,” Hughes, the former journalist, explained. “My writing style is that I write what I know and I write what I feel or what I want. Half the music I write is for the maximum posing effect. You know, the kind of rock and roll that makes you want to stand in front of a mirror with the majesty of rock fist held high.”

Despite writing all the material for the band’s first disc, Peace, Love, Death Metal, and most on the current release, Hughes said his songs are “rough stones” before presenting them to Homme. “He helps me polish them up and get them to where they need to be,” he said. “He’s the only motherfucker who understands what’s going on in my crazy head. It’s rare. It is really a joy and a gift.”

Hughes, is looking forward to returning to Colorado, where he has an “extensive history” and a “couple of honey babies,” and finally doing a headlining show here. His dreams, however, are much bigger than venues like the Bluebird Theater, where the band plays June 6 with their fellow mustached rockers, The Giraffes. “We really shine in a club, but my goal is arena rock. I want to bring back true arena rock, which is actually fun and functional. According to Hughes, no matter what venue it is, “if you want to have the most unashamedly good time in your life,” you need to come to an Eagles of Death Metal show.

He also added, “If ladies want to feel re-inforced and good about simply being a woman,” they, too, need to come to his show. Finally, “If you just want to learn about how to get laid, have a good time and lighten up, or if you want to feel sexy and you want to be rocked by a mustache harder than you’ve ever been rocked in all your born days,” then a dose of the Eagles of Death Metal are what you need.

• Queens of the Stone Age