Trending Stories from The Marquee
You are at:Home»Features»Eels complete double tour for the double album Blinking Lights
By Marquee Magazine on June 1, 2006 Features, Interviews, Timothy Dwenger 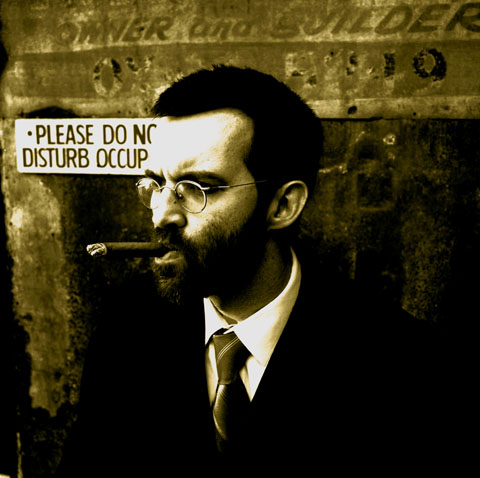 “God damn right, it’s a beautiful day,” sings Mark Oliver Everett, a.k.a. “E,” on “Mr. E’s Beautiful Blues.” The song, released during the summer of 2000, was featured on the soundtrack of the movie Road Trip, and exposed E and his band, Eels, to a much broader audience than any of his previous releases. Though a lyric this optimistic is a little out of character for E, the song showcases his signature brand of melodic and moody down-tempo rock music.

Since 1995, Eels have existed as a forum for E’s musical fantasies to be realized. The loose conglomeration of musicians that have played in Eels numbers in the high twenties, and includes such famous names as Tom Waits, T-Bone Burnett, Grant Lee Philips and Peter Buck of REM. Waits, in his own unique way, captured the spirit of Eels by saying, “Eels are outsiders, like folks that paint with fingernail polish.”

In the spring of 2005 E left these rock and roll names behind and hit the road for the Eels With Strings Tour that featured a string quartet and spawned Eels with Strings: Live At Town Hall, a CD and DVD release.

In a recent interview with The Marquee E discussed heading back out on the road without releasing a new studio album, something he has never done before. “Since Blinking Lights and Other Revelations (2005) was a big sprawling double album, I felt it should have two big sprawling tours in its honor. That’s the new rule, double album double tour. I am sure I am going to be pretty tired at the end of it so I am just glad it wasn’t a triple album,” he said.

This time out E has returned to a more familiar rock and roll line-up and the band’s roster reads like the credits of a Farrelly Brothers movie. ‘The Chet’ covers a variety of instruments, stringed and otherwise. ‘Krazy Al’ will be on bass and ‘Knuckles’ is set to be behind the drum kit. “Last year’s Eels concert was a gentleman’s concert, you could say, and this year I have a feeling … well let’s just say it’s not going to be your parents’ Eels concert,” E chuckled. “One thing I hope to do this year is play a lot of Eels songs that have never been played live before.”

Fortunately, for those who were unable to catch the “gentleman’s concert,” it was captured live at New York City’s famed Town Hall and the result is a stunning collection of 22 songs culled from the six-album Eels discography. While the collection focuses on material from Blinking Lights, E and company presented tender readings of some of his most well known songs and a beautiful rendition of Bob Dylan’s “Girl from the North Country.”

In addition to Bob Dylan, E has covered several other artists over the years, but seldom on more than one tour. In 2004 E participated in a project that paid tribute to the songwriting of an unlikely musical hero, Daniel Johnston, the singer/songwriter and pilgrim of indie music who has released over 30 albums during his career. E’s version of “Livin’ Life” is a highlight of the late-great Daniel Johnston: Discovered Covered album. “Johnston is one of many who have influenced me over the years,” said E. “He is a great songwriter and we’ve been doing that song for a long time. I think we started playing that back in 1996 or so and I think it is the only cover tune I have done on more than one tour. It is just one of those songs you wish you’d written.”

Whether or not “Livin’ Life” will be on the setlist for this summer’s Eels – No Strings Attached Tour is anybody’s guess, but you can be sure that E will present a show that puts a new spin on his familiar songs. “Every tour has its own unique sort of twist to it and they are really their own thing. I like to think of it like it’s a whole new band that just happens to have the same name,” said E.