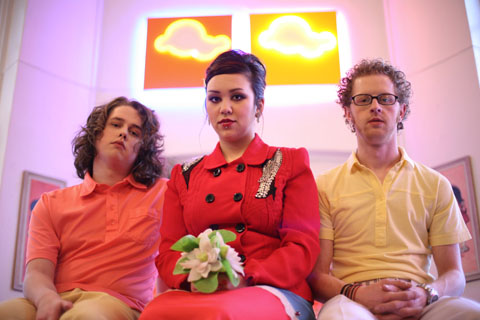 Don’t let the fam-friendly name fool you. While the band takes the name Mon Frere, which is the French translation of ‘my brother,’ they also take rock to a new level of death-pop.

“It’s Mon Frere in the most Americanized way,” said guitarist Kyle Swisher in an interview with The Marquee.

Although the name is French, Swisher actually had no idea that it meant ‘my brother’ until after the band was named. He got the name from a scene in the 1995 Kevin Smith film Mallrats, when Jason Lee’s character Brodie answers the door saying, ‘If it isn’t mon frere?’

With an eclectic mixture of punk, pop and death rock, Mon Frere has taken their sound to new heights with their latest release Blood, Sweat & Swords (Cake Records).

Mon Frere got together in September of 2003 and by February of the following year, with only a few basement rehearsals under their belt, they had won Paul Allen’s Experience Music Project’s Sound Off! Underage Band Competition in Seattle, Wash. The grand prize included a two-day recording session in Electrokitty Studios with producer Blake Wescott. The result was the band’s first release, an EP, Real Vampires.

Things have only gotten better since.

Vampires came up as a theme one day when the band was discussing the appearance of vampires on the show “Buffy the Vampire Slayer.” The vampires look like normal people until they vamp out and their faces get scrunched. Swisher’s comment was that “real vampires don’t get shit faced.” The band stuck with the vampire theme and although it might not match up with Mon Frere very well, the mismatch has brought the band great fortune.

In fact, with the release of Blood, Sweat & Swords the band continues that mismatched approach with cover art that’s indicative of late 1970s heavy metal — a collection of dripping, bleeding skulls impaled on large cutlass-style swords. The tracks contained within have an edge, but essentially boil down to a trio of keyboards, de-tuned guitar and drums with electronic rock that comes off in a futuristically poppy way, full of brash punk energy. The album is simultaneously hard and soft, fast and slow, innocent and evil, and cruel and cartoonish.

Winning the Sound Off! competition really helped Mon Frere to break out of the local scene. “It was crazy to go from playing the local pavilion to playing in front of hundreds of people,” Swisher said. Their prize performance was only the sixth show they had done together as a band.

The distinct vocals of the group come from Nouela Johnston, a Korean native who has spent most of her life in Washington. Johnston is inspired by vampires and has a voice that allows her to sing just about anything she wants to.

The band has a variety of influences, Smashing Pumpkins being one of the favorites. While their fans and the music are similar to the emo scene, the band stays away from romantic associations. “I was playing in an emo-screamo group, but I decided to turn over a new leaf and start a new band,” Swisher said. “We don’t write songs about cute boys or anything,”

Swisher learned how to play the guitar for his senior project in high school and has stuck with it ever since. He went to high school with his bandmates, and while they were all in the same scene they weren’t close until they formed the band.

Like all rock groups, there have been changes in the line-up. Drummer Dustin McGhie is a recent addition of about six months. “Dustin was in my old band and Nouela knew him, so it was a pretty seamless switch,” Swisher said.

Blood, Sweat & Swords brings the band to new places, both musically and literally. The band has recently embarked on a tour that will bring them out to the Knitting Factory in N.Y.C., further than the band has ever gone before.

In addition to the stretches demanded by their tour, the band reached for some substance with the release of Swords. “Putting out a full album really feels good for the band, it adds a sense of longevity,” Swisher said.

Although Mon Frere has a long journey ahead, they are feeling ambitious. The band has been on tour before but never out to the East Coast. With new opportunities and different places on the horizon, their view is that anything is possible.