Trending Stories from The Marquee
You are at:Home»Features»Rogue Wave flying high on the strength of Descended Like Vultures
By Marquee Magazine on June 1, 2006 Features, Interviews, Timothy Dwenger 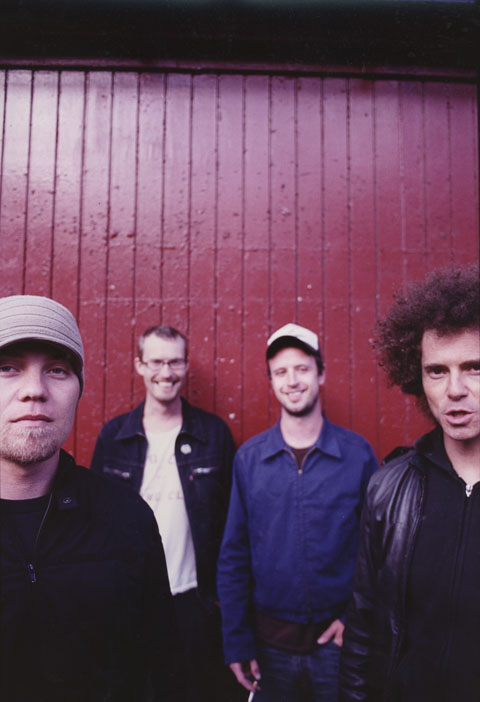 The San Francisco Bay Area in the ’90s was the hotbed for technology associated with Al Gore’s proudest invention, the internet. With the advent of the internet and the meteoric rise in its use and importance to our culture, came thousands of people and companies looking to make their fortunes.  Companies were being started by 21-year-old kids and it seemed like anyone who could type could get a job as a web developer. It was a time of great opportunity for many, but for Zach Rogue, the frontman and primary songwriter for Rogue Wave, it was what happened as the technology boom was winding down that changed his life.

In 2001 Rogue was laid off from his tedious job as a web developer and viewed it as an opportunity to tap into another side of his personality that had been lurking just outside his consciousness as long as he could remember. Rogue graciously sat down to talk to The Marquee recently as he packed up his belongings to move into a new house and prepare for an extensive national tour.  “I had had enough of that style of life,” he said.  “It was a lot of long hours but there wasn’t really anything that stimulating. I just wasn’t that into it.  Once I got laid off it kinda cleared my schedule a bit so I started recording. I didn’t think I was going to make a record necessarily but I wanted to work on music a little bit.”

Rogue began to explore the writing process and as he laid down some demos on his four-track he was surprised at what he discovered. “I realized that I had been writing songs my whole life in my head but not really writing them down,” he said. “You know how you’re walking down the street and you are thinking about a song you heard on the radio and it is rolling around in your brain?  It was the same for me but I realized the songs that had been rolling around in my head were my own songs. Songs I was working on I guess. I didn’t really think of it as legitimate because I didn’t think I was one of ‘those’ people and as a result I didn’t really nurture it. As I have continued on in songwriting I realize that I am sometimes tapping into an idea that was in me about 20 years ago or maybe 10 minutes ago.”

Rogue and producer Bill Racine took several of these four-track demo recordings into the studio and began working on what would become Rogue Wave’s debut CD, Out Of The Shadow.  The CD, released on Rogue’s own label in 2003, and the newly formed band’s Bay Area live shows soon caught the attention of indie music giant Sub-Pop Records. In 2004 Out Of The Shadow was released nationally on Sub-Pop and things started to take off for Rogue Wave.

While the band had originated as a forum for Rogue to explore his musical ideas, it had now morphed into a full fledged project of its own.  Consisting of Rogue, Pat Spurgeon (drums, etc.), Gram LeBron (guitar) and Evan Farrell (bass), the four soon found themselves spending nearly every waking moment together. “The more time you spend together and the more you get involved with this world of music, the more you isolate yourself from the rest of the world, so you only start to identify with each other,” Rogue said.  “Only the four of us know what we are going through from our own little perspective and that binds us together and makes us closer. We tend to help each other out when something bad happens and when something great happens we kinda share in it.”

As they continue to gel as individuals the music seems to fall into place. Their recent release Descended Like Vultures was their first collaborative studio effort and it has attracted national attention and solid reviews have been turned in by everyone from Rolling Stone to Under The Radar.

Now as they prepare to hit the road for their second major tour of the year Rogue and his bandmates will play two of the biggest shows of their short career back-to-back. First they head to San Diego to support The Flaming Lips and then on to the main stage of the Sasquatch Music Festival, where they have the potential of playing in front of 20,000 people. “The last couple of tours we have done we have been playing to 800 people, and sometimes on a really good night 1000 or so, but it must be a whole different world when it is thousands and thousands of people,” Rogue said.  “The closest we have come to that was when we were in Germany and by some weird twist of fate we were asked to open for Jimmy Eat World. We walked into this venue and I turned my amp on and thought there was something wrong with it.  The room was so big that you could barely even hear it. I had it completely jacked up, if you do that in any other room it would have made your ears bleed. It was like our forces were powerless against the gigantitude of the room.”

The band takes their live show very seriously and artfully rearranges their lushly layered pop sound so that it translates very well from the studio to the stage. The quiet acoustic ballads are adapted to a full band without loosing the intimate feel of the song’s original structure and the bright harmonies and hooks of the band’s poppier tunes stream off the stage.