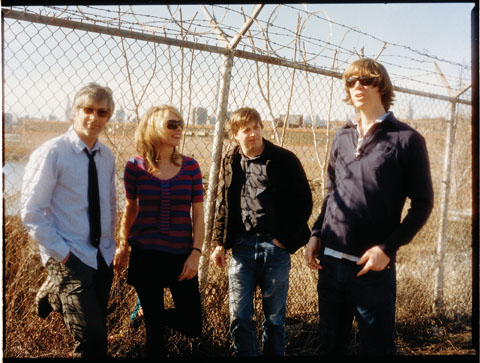 Sonic Youth is one of those rare bands that nearly everyone has heard of, but very few really know. Having been together for 25 years, the band is legendary in the underground rock scene and rock steady pioneers for having been part of New York City’s clangorous early-1980s No Wave movement.

Despite sporadic commercial success, they still carry a certain amount of anonymity, particularly among young kids. With their latest album set for release on June 13 and a summer tour to follow, which includes seven supporting dates for Pearl Jam, Sonic Youth is following the formula that has kept them going for so long — making honest albums and bringing that music to the live stage.

Sonic Youth’s new album, Rather Ripped, is a straight forward pop/rock album that is very concise and to the point — a departure for a band that is known for leaning towards the avant-garde when it comes to studio work. Recorded in the group’s hometown of New York City, Sonic Youth draws on many influences, most of which are its own. Returning to their nucleus formation of Thurston Moore, Kim Gordon, Steve Shelley and Lee Ranaldo, Sonic Youth has created a commercial gem of an album that has radio melodies without losing the band’s signature guitar edge.

“In light of Sonic Youth, it is going to be much more of a straight-ahead record,” said guitarist and vocalist Lee Ranaldo in a recent interview with The Marquee. “The music we make doesn’t really fit into the mainstream. But, this record is to the point. Public perception is something we have never had control over.”

Formed in 1981 in downtown New York City, Sonic Youth found itself in the middle of the No Wave movement of the early 1980s — an offshoot of the New York punk rock movement. No Wave, a play off of New Wave, simply implied the music belonged to no set genre or style.

Bassist, guitarist and vocalist Kim Gordon, a visual arts student in Los Angeles before she moved to New York City, had been playing and writing with Moore for a few years before Ranaldo had joined the group. Drummer Steve Shelley didn’t come into the fold until 1984 and, with his addition, the band’s sound gelled into a pop/noise hybrid with much room for experimentation.

Signed to Black Flag’s record label, SST, in 1986, Sonic Youth released Sister in 1987 — a record that would put them on the underground map. It wasn’t until their double LP Daydream Nation was released in 1989 that the critical and major label acclaim found them. By the decade’s end (and with some fan backlash), Sonic Youth had signed to the major label Geffen Records.

At the beginning of the grunge movement in the early 1990s, Sonic Youth, fresh off their Geffen Records debut Goo, found itself headling a U.S. tour with fellow Geffen supporting band Nirvana. The tour was a success, but as Nirvana and many other Sonic Youth friends rocketed to superstardom, Sonic Youth never seemed to reach the commercial heights that the band’s younger counterparts realized. The band released nine more albums, many to critical acclaim, from 1992-2004. As Rather Ripped is approaching its release date, the band looks to be sitting on an album that should create some commercial noise.

Enlisting John Angello (Dinosaur Jr., Alice Cooper, Jimmy Eat World) to mix Rather Ripped was a wise decision for the band, considering this is Sonic Youth’s last album owed to Geffen Records under their current record contract, signed in the late 1980s. Angello has mixed the record rather cleanly, allowing guitars to layer concisely and the vocals and harmonies to shine. This record is clearly about the songs.

“We have known John for a long time but never had a chance to work together,” Ranaldo said.  “We have been friends and always thought about working together. In the end it turned out to be a great decision.”

The result is Sonic Youth’s most commercial and listenable release to date.