Trending Stories from The Marquee
You are at:Home»Features»Rusted Root refocuses after years in relative obscurity and solo projects
By Marquee Magazine on July 1, 2006 Features, Interviews, Monica Banks 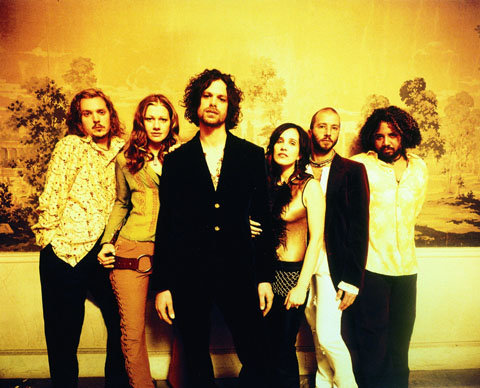 In the early 1990s Rusted Root exploded into the music world with a neo-hippie vibe and a blend of rock and world music that few had seen before, at least in such a mainstream realm.

Snatching up hits and critical acclaim with songs like “Send Me on My Way,” “Ecstasy” and “Rain,” the band’s second album, 1994’s When I Woke went platinum and there was barely a dormroom in America that didn’t have at least one copy of the album in its collection.

But soon after their great success came a level of great obscurity and in recent years, Michael Glabicki — the Charlie Manson of the Rusted Root family — was performing small solo gigs in clubs throughout the States.

Now, however, the band has regrouped, reformed and released a new album. That album is a two CD set of a collection of live songs, a combination of sensational songwriting and eclectic sounds from around the world, literally.

Rusted Root Live is a compilation of both old and new. For two years the band recorded every show they played. After this period of constant recording, the band sat down and listened to everything to decide what would go on the new album. “We really developed as a live band. Recording in studios didn’t capture our energy during a show,” said guitarist, vocalist and percussionist Liz Berlin in a recent interview with The Marquee. In their second decade of existence, Rusted Root has finally captured the energy that was missing from their six studio-released albums.

The album contains a cover of Neil Young’s “Powderfinger,” the early favorite, light-hearted “Send Me on My Way,” and the soulful “Blue Diamonds,” a song that arose from a near-death experience of Glabicki’s childhood. “When I was two-and-a-half years old I was hit by a car and in my unconsciousness, I met this sort of being and she’s been by me ever since,” Glabicki has said about the song. “We sort of have that kind of a deal where she’s going to stick around. It’s kind of a love song about that. A love song about an angel.”

A large part of the band’s obscurity over the last several years has been caused by the members exploring solo projects. Glabicki did the aforementioned club tours and released an album on his own titled Uprooted. Multi-instrumentalist Patrick Norman released his truly solo album Digital Underworld, playing all of the instruments himself. Drummer Jim Donovan has released six albums on his own, the last of which is Revelation 9, a blend of electronic and tribal beats. Vocalist Jenn Wertz has put out two albums on her own, Lovechild and Acoustic, and Berlin very recently released her solo debut AudioBioGraphical.

Berlin said that the freedom to explore these solo projects has helped to solidify the family feel of the band, with everyone doing their own thing, knowing ultimately that they have the support and backing of their bandmates. “Rusted Root is a lot like a family, the bad and the good,” said Berlin.