Trending Stories from The Marquee
You are at:Home»Features»Shafer, McCumber and Pawlina team up as Unknown Americans
By Marquee Magazine on July 1, 2006 Features, Interviews 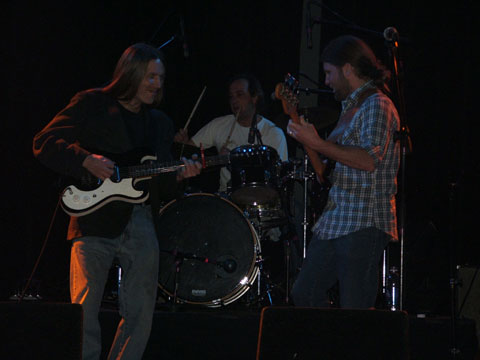 As alt-country continues to come of age and defines its place nationally on the musical landscape, The Unknown Americans are, locally, melding traditional country melodies with rocking backbeat and beautiful harmonies, unveiling a cleaner, “poppier” side to Colorado singer/songwriter Danny Shafer’s writing and performing.

During his fifteen year tenure as a musician on the Front Range, Shafer has built a reputation as one of Colorado’s most prolific singer/songwriters, often playing several gigs a week with different line-ups under different band names. He might have been playing with The Danny Shafer Band, Danny Shafer & The Red Glory Ramblers, The All-Night Honky Tonk All-Stars or, most recently, with The Unknown Americans.

Kort McCumber, bassist for The Unknown Americans, knew Shafer by reputation before moving to Colorado from Nashville three years ago. “Danny’s name was known around Nashville as a guy out in Colorado who booked singer/songwriters at a place called Penny Lane. I sent him my stuff,” McCumber said in a recent interview with The Marquee.

“Yeah, I didn’t book him,” Shafer chuckled and looked over at his recent collaborator, “but when I met Kort on the Colorado music scene I thought that I had met my stunt double. We were both working musicians, and we were regularly playing all the same venues. Pretty soon people started suggesting that we play together and so we did.”

These two share a musical connection that is as evident when they are relaxed talking about music and The Unknown Americans as it is when they are smiling at each other on stage trading off vocal duties on soaring harmonies.

“I haven’t heard anyone here or in Nashville writing songs as good as Danny,” McCumber said.

Apparently he isn’t the only one who thinks so.  According to Shafer, Hit and Run Bluegrass recorded two of his songs last year. “They have been playing them all over the country. Those guys are really great,” Shafer said.

Last fall Shafer wrote 15 songs for a new project that later became The Unknown Americans.  Shafer and McCumber got together and Jason Pawlina on drums rounded out the trio. “Jason is a great drummer. We have played together off and on for the past 10 years,” Shafer said. “He is steady and strong.”

Trading conversation as effortlessly as they do verse on stage, Shafer chimed in, “All three of us sing, which allows us to put together some amazing three-part harmonies. The Unknown Americans have a cleaner, ‘poppier’ sound than anything else that I have done. The vocals are more featured, more out front.”

Shafer and McCumber represent the original singer/songwriter work ethic, so when the trio got together this past January they didn’t waste any time. “It’s not like we spent three months wood-shedding this material. We had these songs. We were all out gigging solo for a living, so we just started playing the material in front of audiences, and the audiences really seem to be enjoying it,” Shafer said.

McCumber, who grew up playing piano and cello in Florida before moving to Nashville to be a professional musician, has certainly taken to his new surroundings. “Nashville is really competitive. There is more of a sense that you are ‘working’ as a songwriter and that you are in Nashville specifically for that purpose. I love being a musician in Colorado. People want to be here,” he said.

“You see people pushing the envelope and really helping each other along,” he continued, “There is the expectation that we are gonna play a lot of covers at the kind of gigs we get. It can be a real challenge to get people out of their seats for original music, but I work hard to get them out of their Friday night, after-work element. When you see them start to smile, then stand up, then start to dance, it is worth it. It is really rewarding.”

• Tom Petty and the Heartbreakers