Trending Stories from The Marquee
You are at:Home»Brian F. Johnson»Supersuckers get Paid as rock and roll records start selling big
By Marquee Magazine on July 1, 2006 Brian F. Johnson, Features, Interviews 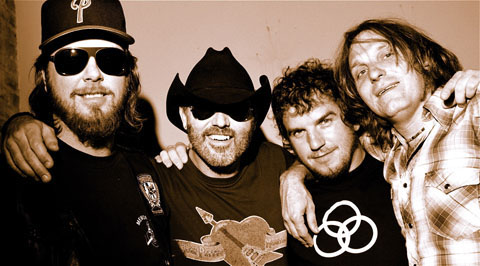 Three years ago when Eddie Spaghetti belted out “Rock and Roll Records Ain’t Selling This Year,” the biggest hit of the Supersucker’s career, he was dead-on right. Ironically, the song, off the band’s Motherfuckers Be Trippin’, went to number one on the RnR specialty charts for four weeks in a row, but the gist of the song was still correct: rock and roll was in a slump. Now, however, three full calendars later, rock and roll records are selling and the band, which recently grew to a four-piece, is soaking up the rock wave and riding it high with a new take on an old idea.

On June 6 the Supersuckers released Paid, a six-track EP that features the first release of new material by the band in over three years. The idea, according to Spaghetti, is to release a series of EPs before the band puts out a new full-length, and he said that it’s similar to the way things were done back in the embryonic days of rock and roll. “I wanted to just put out singles, but no one agreed, so we’re doing EPs for now,” said Spaghetti in a recent interview with The Marquee. “What we’re doing is feeling out new ways of releasing music from an independent rock band. We do everything ourselves short of distribution, so this is kind of an experiment.”

Spaghetti and the rest of the Suckers know that it could be a risk, as EPs are often given less credibility than LPs, but he said their thoughts are that Paid will end up helping the band in the long run. “We want people to get past the idea that an EP is a little thing and nothing to worry about. This is a big thing. It’s huge. It’s brand new music from us and it’s awesome, and just because it only has six songs on it doesn’t mean it’s any less awesome. This is a great way for people to not have to commit to spending $15 on a new, or hopefully new band that they haven’t heard of. We want to get this out to people who haven’t heard us.”

Spaghetti went on to explain that another EP will follow Paid in the next couple of months and a possible third might even be released before a full length album is issued.

As for the new material, Paid is all-new refined Supersuckers, with a cleaner sound than the band has ever had, but one that still embraces the band’s gritty heritage. The six songs that make up Paid seem like a clean-shaven, dressed up version of the group, but doesn’t in any way border on some type of over-produced sham. “The general consensus is that it sounds way better that we usually sound on our records, and that didn’t turn out to be a bad thing,” said Spaghetti. “We’ve erred on the side of being too shitty on records for too long. Now, we feel comfortable with the way we sound and that helps to be able to go in and record something that sounds great and not worry too much about whether or not we’re coming through.”

While he didn’t appear on Paid, part of what might be helping to tweak the Supersuckers live sound is the addition of their newest band member, drummer Scott Churilla, or ‘Scott-zilla’ as he is known to his bandmates. Churilla comes from a long tenure with the Rev. Horton Heat, and Spaghetti said he’s fitting right in with the band. “He’s perfect. Hell, he and I have already had our first, and second and third arguments, so I like that we’ve risen above all that and we just wanna rock,” said Spaghetti.

But, Spaghetti admitted too that they’re slightly wary to rock too hard this summer, as Social Distortion’s opener. “It’s gonna go one of two ways, either (Social D. frontman) Mike Ness is going to wonder why he doesn’t always have someone this good opening for him, or he’s gonna say we’ve gotta go, because we’re too good. We’re definitely gonna smoke ’em,” Spaghetti said.