Trending Stories from The Marquee
You are at:Home»Cover Story»The Flaming Lips think outside the bubble for newest CD At War with the Mystics
By Marquee Magazine on July 1, 2006 Cover Story, Features, Interviews, Timothy Dwenger 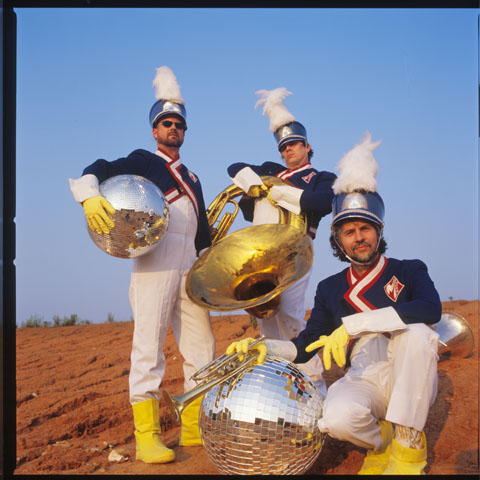 “If you could blow up the world with the flick of a switch, would you do it?” The question comes from one of the oddest and most interesting characters in rock and roll today: Wayne Coyne.  Coyne is the primary songwriter and front-man for The Flaming Lips and his existential leanings have taken a decidedly political turn on their new album At War With The Mystics. “The Yeah Yeah Yeah Song” eventually culminates with Coyne morally espousing, “It’s a very dangerous thing to do exactly what you want. Because you cannot know yourself or what you’d really do with all your power.”

Is he making a political statement or has he climbed up onto a pulpit to preach to his fans? While the latter is unlikely, Coyne has been known to do strange things over the years as the mad scientist of sorts who is behind many of The Flaming Lips more outrageous projects. He came up with the idea to walk over the crowd at Coachella in a giant bubble, he is the one who’s brainchild it was to record an album on four CDs that were meant to played simultaneously on four separate stereos, and he is the one who is directing a movie called Christmas on Mars, filming inside a grain silo in the middle of Oklahoma. Is he insane or is he a genius? As they said in Spinal Tap, “There’s a fine line between clever and stupid.”

So far in their career, The Lips haven’t fallen over into the stupid camp. The Marquee recently had the opportunity to sit down with Michael Ivins, co-founder of The Flaming Lips, to discuss furry animal costumes, Santa Claus and some of the other mysteries surrounding Oklahoma’s biggest rock band.

For years, The Flaming Lips managed to slip under mainstream radar despite completely groundbreaking work both on the stage and in the studio. “I think we got lucky in that we weren’t ever very popular when we were young,” said Coyne in a recent release. “We were always around bands that were popular enough to be considered rock stars and it’s a struggle. People make fun of Paris Hilton because she has trouble keeping her boyfriends, but it’s a struggle for any young person to have that much attention. When you’re young it is like a drug in a way — you just want more and more — and we were just making music, doing art, doing whatever it was without a lot of attention, fame, money and the shit that comes along with that. I think we just got lucky.”

The Lips luck hasn’t changed, although it does keep getting better. Since the release of Yoshimi Battles the Pink Robots in 2002, the band has been on the top of the list of innovative artists on the popular music scene. That album spawned the mega hit “Do You Realize,” a melancholy meditation on mortality within the guise of an orchestral rock song. In an age when bands like Green Day and Blink 182 were hitting the top of the charts with three-minute punk rock anthems, The Lips broke the mold. They added strings, bells and choir-like harmonies to their rock songs and they did it so effectively that a large portion of the public who wouldn’t normally embrace “art rock” found themselves singing along with Coyne as he posed the question, “Do you realize that happiness makes you cry?”

Fortunately, with two of the three Lips being well into their 40’s (Steven Drozd, at 36 is the youngest member of the band), they have matured. Today, Ivins can speak confidently when he says that “now that we are older we can look at things and say, ‘well if we are going to have success and all that comes with it, we will know how to use it in more productive and constructive ways than if we were twenty and someone handed us a zillion dollars.’”

They may not be on their way to being handed a “zillion dollars” but The Lips popularity has soared recently. The long awaited release of At War With The Mystics recently landed them on the cover of Paste Magazine, the stage of the Ed Sullivan Theater and several other high profile locations.

The tracks on At War With The Mystics were recorded over the course of three years and in between many other projects. “At one point during the sessions we were doing four separate things,” said Ivins, recalling the chaos that often comes with success. “I think there was a remix going on, we were working on our stuff, we were in the middle of a big archiving project, and doing surround sound remixes of our older albums. It was really just too much to keep track of and the Mystics project was the one that got delayed.”

While the three members of The Lips are largely responsible for the sound on the record, they have a secret weapon in their co-producer Dave Fridman, or ‘The Fourth Lip.’ Ivins speaks of Fridman’s input very fondly and the band’s respect for him is obvious. “As a band, all three of us take a very active role in the production of our records and we have worked with Dave since 1989, with the exception of Transmissions from the Satellite Heart. We like to say that we are a production team who just happens to work on our band.”

Experiencing The Flaming Lips as a recorded being is one thing, and it is a greatly powerful thing, however where Coyne and company really pull away from the pack is on the stage. “When we play live we want it to be even more of an experience and things are even more rocked out than they are on the record,” Ivins said. “For one thing, it is a lot louder than you could ever play it at home, and then we throw in a little extra distortion and just generally try to rock it up so that the experience is more visceral than just sitting in the comfort of your own home. If we don’t put on a great show for the people who are paying money to put some clothes on and get out of the house, we haven’t done our job.”

If the raw energy they pour forth on stage isn’t enough, there is a performance art side to The Lips stage show as well. Coyne stands front and center, sporting his trademark rumpled suit and wild gray-streaked hair and is flanked by Ivins and Drozd. “Stephen and I have stopped wearing the fury animal suits we were wearing for years,” Ivins said. “On this tour I have been wearing a skeleton suit and Steven wears this space age silver jumpsuit thing. We also have Santa Claus on one side of the stage and aliens on the other.”  Couple the costumes with a giant video screen, disco ball, confetti and the gallons of fake blood that have been known to show up at Lips shows and you have yourself one hell of a concert.

Though previous Lips tours were completely over the top and unlike anything else out there, Ivins said that returning fans may be in for a surprise this summer and in years to come as the band still has the desire to keep pushing the envelope.  “I think we are just going to keep upping the ante on the production of our live shows because after a while who wants to just go see a band play their instruments, especially in big venues. It just seems like it should be a cool show and plus, it’s more fun for us this way,” said Ivins.